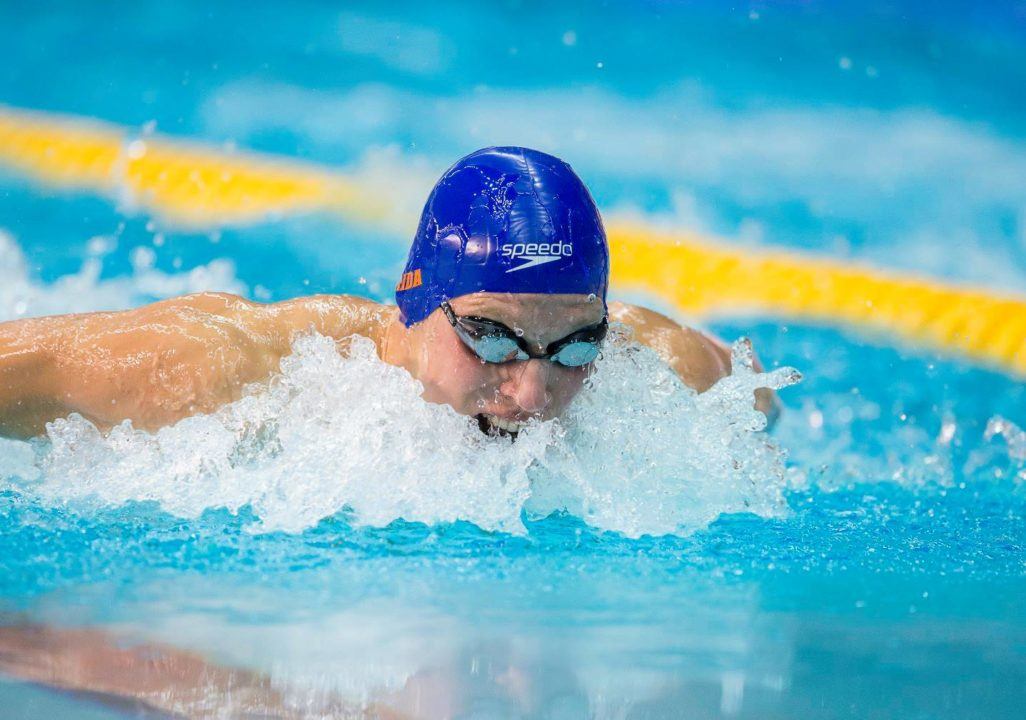 Scotland's Mark Szaranek is a gold medal contender in the IM events on the Gold Coast. Archive photo via SWPix.com for Scottish Swimming

The men’s individual medley events at Commonwealth Games are looking completely wide open. Like many of the events the British and Australian swimmers come in as the top seeds, but these two in particular have no clear favorite.

There are seven swimmers who come into the men’s 200 IM having gone sub-2:00 during the last year. Australian Clyde Lewis leads the pack after going a best of 1:58.06 at the 2017 World Championships. After going that in prelims he ended up placing 15th with a 1:59.8 in the semis, but was back on his mark at Australian Trials in 1:58.36.

Former backstroke world champion Mitch Larkin was just off his best at Trials in 1:59.01 (under an hour after winning the 200 back), and has really broken into the IM events recently. He won’t have to deal with that 200 back double at the Games, but does have a heavy schedule overall and could be drained with the 200 IM on the final day. He went a best of 1:58.89 in December at the Queensland Championships.

Joining Lewis and Larkin with bests of 1:58 is the Scottish duo of Mark Szaranek and Duncan Scott. Though Szaranek didn’t exactly have the NCAA Championship performance he was looking for, failing to defend his 200 IM title and missing the A-final in the 400 IM, he did go a best time in the 200 and has proven himself in long course with a 1:58.39 in April and 1:58.80 in July of 2017. Scott finished .05 behind Szaranek at the 2017 British Trials, narrowly missing a Worlds spot in the event after clocking 1:58.44. If he’s within striking distance of the leaders heading into the freestyle he may be able to run them down.

Also under 2:00 in 2017 were Joe Litchfield and Jarvis Parkinson of England, and Bradlee Ashby of New Zealand, who finished 13th at the World Championships. Australian Travis Mahoney hasn’t gotten under 2 since 2015, but got real close at Trials in 2:00.19.

The big darkhorse in both this event and the 400 is Scotland’s Dan Wallace. Wallace was the runner-up in this event four years ago, and went on to place 4th at the 2015 World Championships and 8th at the 2016 Olympics. After an underwhelming 6th at the 2017 British Nationals, Wallace plead guilty to a DUI charge last June and was suspended three months by British Swimming and Scottish Swimming. He has the fastest best time of anyone in the field at 1:57.59, but whether or not he can get down there and contend for the gold remains to be seen.

It is worth noting that though Wallace wasn’t great at the 2017 Trials, he made that Olympic final after placing 6th at the Olympic Trials the year prior. He seems to be able to step up big when it counts.

With just 11 entries into the men’s 400 IM, it looks like the prelims will be a two heat chess match as swimmers will attempt to qualify for the final while expending as little energy as possible. There are eight swimmers in between 4:15.5 and 4:19.1 in the last year, making this maybe even more wide open than the 200.

Szaranek leads the pack with his 4:15.51 from the British Championships. Expect him to be hungry in this event after missing the World Championship final by .02, and then swimming a time that would’ve placed 3rd in the A-final from the B-final at NCAAs.

Larkin dropped a personal best of 4:15.68 a month ago, finally beating his previous best from the 2010 Junior Pan Pacs. The 24-year-old was slated to take on a tough double with the 100 back final less than 20 minutes after this one, but it was revealed on Sunday that he is dropping the event. Lewis and Mahoney will now be the only Australian contestants, both swimming their best times in 2016. Lewis was 4:16.58 at the Olympic Trials, while Mahoney got all the way down to 4:13.37 in the Olympic heats before ultimately placing 7th.

Joining Szaranek for the Scots is Wallace, who is the defending champion in this event. He’s been under 4:15 seven times, with a best of 4:11.04, but his best swim in the last year is just 4:32.39. However, he has been known to swim relatively slow in-season, so we shouldn’t read too much into that time. His talent isn’t the question, it’s whether or not he has the endurance right now.

The others who will be in the mix in this extremely small field are Tristan Cote of Canada, Lewis Clareburt and his fellow Kiwi Bradlee Ashby, and England’s Joe Litchfield. Cote is coming off a Canadian University title in a SCM best time in February and should challenge his PB of 4:17.4.

We originally had Larkin pegged for 2nd, but with his withdrawal we’ve moved Litchfield up into the top-8.

Is Litchfield out? I can see Szaranek being around 1:57.0 this meet. I think in of his interviews, Caeleb said Mark was a bit off at NCAAs. Some good IM going on in the UK…

Max Litchfield had to pull out due to shoulder issues, yes. But Joe Litchfield is there!

Max Litchfield’s withdrawal, essentially, removes the “quality” from these events and renders both events into lotteries. Dan Wallace, at his best, would be a favourite for both but we haven’t seen performances of that nature for some years. If any of the 1.58men can hit 1.57low then they will most likely win; picking a name is the issue as whilst they CAN swim 1.58s most if not all have problems replicating. As for 400, anything around 4.10 – 4.11 should win; sub 4.14 may well contend for the podium

Scott is a massive dark horse here. His physique is looking more filled out now, some strength gains could be huge for him.

I really hope the Aussies get absolutely stuffed given recent events, even if we have to rely on the Jocks to do it sometimes.