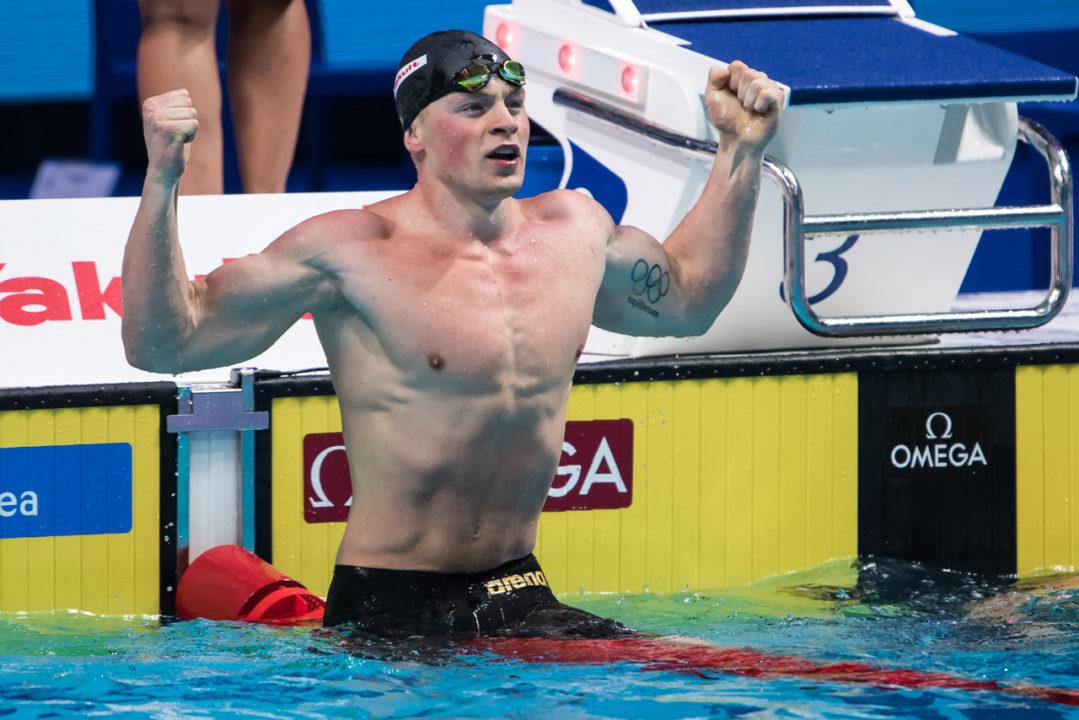 Just under 7 years after having been announced as host of the 2018 Commonwealth Games, Gold Coast, Australia is ready to welcome athletes from around the world to compete at its newly renovated Optus Aquatic Centre. The swimming competition will be spread out over 7 days, with events in the 200m range and longer headed straight to finals after prelims, while the shorter events will follow the prelims-semifinals-finals format.

The men’s breaststroking events fall on days 1, 2 and 4 on the Gold Coast, with the athletes kicking off their campaigns with the 200m breaststroke on Thursday, April 5th. 2 out of the top 3 finishers from the 2014 edition of the Games will be back to defend their medals, including Scottish gold medalist Ross Murdoch.

Murdoch blasted onto the international scene at the last Games with a huge gold win over favorite Michael Jamieson, his fellow countryman who won a historic gold in the event at the 2012 Olympic Games. Finishing in 3rd place behind Jamieson was England’s Andrew Willis, also competing this year, hoping to upgrade to a higher step on the podium.

Although not dominant in the 200m distance (yet), England’s Adam Peaty is synonymous around the world with the word breaststroke and the powerhouse will prove to be a presence among the field. His personal best rests at the 2:08.34 produced in 2015, but the Derby native has scarcely raced the even to gather more recent data.

Up-and-comer James Wilby will be representing England as well in the race, giving the nation 3 quality medal opportunities. Wilby is tied for the 10th fastest time in the world at the moment with the 2:10.29 he threw down at England’s Winter Nationals last year.

But it’s Australia’s Matthew Wilson who crushed a speedy 2:08.31 at his nation’s Trials to position himself as a podium favorite if he can repeat the performance. With a roaring Aussie home crowd behind him, that may just give the young 19-year-old what he needs to bring home the gold.

The untouchable Peaty is seeking to extend his almost 4-year long winning streak in the men’s 100m breaststroke. He is the reigning Olympic champion, world record holder and overall king of this event, holding the Commonwealth Games records in the 100m in 58.94, a time he can almost do in his sleep.

But Australian Olympian Jake Packard will have his home crowd behind him, giving him energy to perhaps fire off a new personal best and at least prove to be a worthy silver medalist behind Peaty.

Lurking in the sprint fields is the ever-present South African Cameron van der Burgh, who is primed to sneak in and spoil the Peaty party, with his better chance coming in the 50m breaststroke. Peaty proved he is mortal, at least in the short course version of the splash n’ dash, being beaten down to 3rd place at last year’s European Short Course Championships.

I can see this competition being make or break for Peaty’s Olympic hopes in the 200. He’s been talking about it for a while but every time he dips his toe in the water it hasn’t been too amazing. This is a good opportunity to gauge his potential in it.

Mel has said their tatgets are “commonwealths, and primarily Europeans”. Not a shock considering Europeans are in Britain this year. Perhaps I have misread, but it felt like Euros were a tad more important for Peaty this year. On record saying he’d like to get ‘near’ his WRs this year given two cracks at it – Also entered for the 200 breaststroke; Yet to see if he actually swims.

highly doubt Dressel beats Peaty LCM. Peaty has so much power and I think the rest of the world is really curious about a Peaty 200.

Wilby looked good at BUCS this year with Loughborough swimming pretty beaten up, I think he’ll podium in the 200 with a chance to win it.

Wilby is also my ‘wildcard’ English swimmer. He is usually a good taper swimmer, and if his taper provides as much improvement as it usually does for him, we could be looking at him challenging the 59s barrier. Most improved this year along with Kath Greenslade.

Whether he does good in it or not, it’ll be interesting to see.

I still don’t see Dressel ever beating this guy in breaststroke. He’s in a league of his own.

Finnerty has a better shot of being closer than him, based off his swim speed vs. pullout speed.

I don’t think Dressel will ever swim breaststroke in LCM, besides in an IM

He is not going to do breaststroke at major international meet and risk another groin injury. Same reason Katie Ledecky wont swim IM.

One would hope that a revolutionary breaststroker wouldn’t lose to someone’s who MIGHT do breaststroke, where 100 breast is probably like his….6th best LCM event.

I’m curious to see what shape Peaty’s in. Last uear he focused almost exclusively on the 50, leading tp a slightly sub par 100, but an amazing sub 26 50 breast. Maybe he focused on the 100 this time…