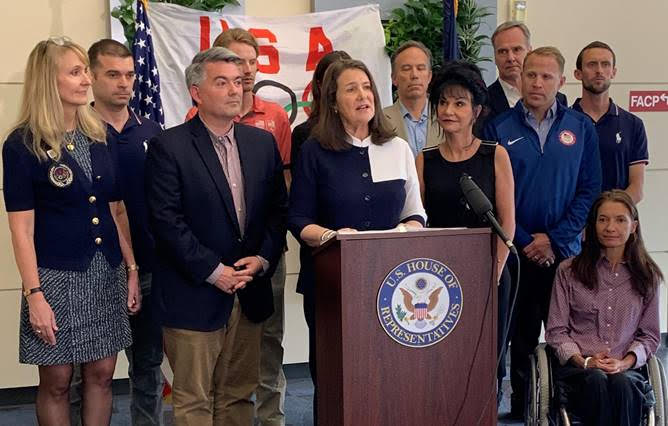 U.S. Representative Diana DeGette (D-Colorado) announced in a press conference on Monday new legislation aimed at reforming the United States Olympic Committee (USOC). Degette, the chair of the House subcommittee that is investigating the USOC’s handling of sexual abuse cases after the Larry Nassar scandal, has proposed a bill that would create an “independent, blue-ribbon commission to begin the process of reforming the USOC.”

“No amount of gold medals are worth putting the health and safety of our athletes at risk,” DeGette, chair of the Energy and Commerce Committee’s Oversight and Investigations panel, said at a press conference in Denver Monday. “When the very body that Congress created to care for our athletes becomes more concerned about winning, and protecting a brand, than the athletes themselves – it’s time for change.”

“We appreciate the efforts of Congress and will continue to work constructively with both the House and the Senate to create healthy and safe environments for the American athletes we serve,” USOC spokesperson Mark Jones said in response to the announcement.

Among those who have publicly come out in support of the bill are US Olympic swimmers Nancy Hogshead-Makar and Barbara “BJ” Bedford, and judge Rosemarie Aquilina, who sentenced former USA Gymnastics team doctor Larry Nasar to up to 175 years in prison. Olympic diver Troy Dumais hass also signed up in support of the bill.

From the press release announcing the bill:

“The legislation comes on the heels of a bipartisan congressional report released in December 2018 that found at least two senior-level USOC officials knew about the allegations against Nassar for more than a year before they were made public but failed to act because they were worried more about the committee’s reputation and finances than they were about athletes’ safety.

If approved, DeGette’s legislation would require Congress to appoint a 16-member commission – that includes at least eight Olympic or Paralympic athletes – to study how the U.S. Olympic Committee currently operates and provide Congress a list of recommendations aimed at reforming its governing structure to better protect the nation’s top athletes.

Under the terms of DeGette’s bill, the top Democratic and Republican lawmakers in both the House and Senate, would each appoint four members to serve on the commission. Each commission member would be required to have extensive experience as a coach, athlete or sports-related advocate.

Once established, the panel would be given nine months to review how the USOC operates and provide Congress a written report detailing specific changes that it believes should be made to better protect athletes going forward.

Specifically, the panel would be asked to evaluate, among other things, how responsive the national governing bodies of each Olympic sports are to its athletes, and whether the U.S. Center for SafeSport has the funding and staff it needs to effectively respond to any future reports of harassment and sexual assault. It would also be asked to review the diversity of the USOC’s board members, its finances and whether it’s achieving its own stated goals.

The commission would be given the power to subpoena witnesses and information from federal agencies as part of its review.

Congress gave the USOC exclusive power to govern all Olympic-related athletic activity in the U.S. in 1978. Since the Nassar scandal first broke, and in light of the more recent revelations that USOC officials knew about the allegations but failed to act, dozens of former Olympic athletes and USOC officials have been calling on Congress to step in and take action to reform the organization.”

DeGette, who was born in Japan, is currently serving her 12th term term in the US Congress, where the represents the state’s 1st congressional district. That district includes all of the city and county of Denver, as well as a number of suburbs. The USOC is headquartered in Colorado.