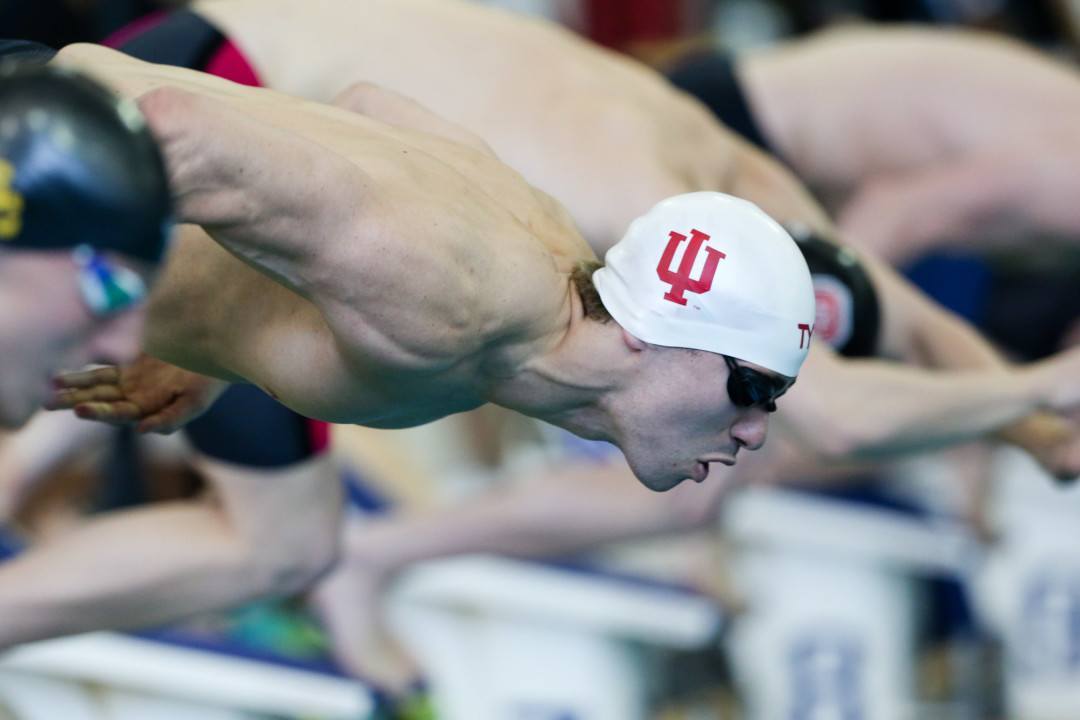 Olympian Blake Pieroni leads an IU sprint freestyle crew that is among the toughest in the NCAA. Archive photo via Tim Binning/TheSwimPictures.com

Despite the loss of two All-American divers to Olympic year redshirts, IU made an inspiring postseason run, nipping Ohio State for runner-up honors at Big Tens, then usurping longtime conference champs Michigan for the top Big Ten spot at the NCAA Championships.

A roster built around sprinters and breaststrokers made huge strides in relays, winning Big Ten titles in 3 of 5 relay events and finishing inside the top 11 in all relays at NCAAs. That included a 4th-place finish in the highly-competitive 400 free relay. 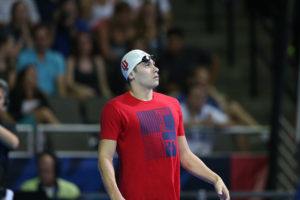 Once a sprinting desert, Bloomington, Indiana has suddenly become an oasis of speed. The Hoosiers went 1-2-3 in the 100 free at Big Tens a year ago and return all three swimmers: junior Blake Pieroni, senior Anze Tavcar and junior Ali Khalafalla.

It’s a different story in the distances, with Indiana scoring zero NCAA points in any individual race over 200 yards last year. The Hoosiers have a handful of decent returners at the conference level (Max Irwin was 4th in the conference in the 500 and John Hubbuch and Adam Destrampe squeaked into the top 10 at Big Tens in the mile), but that whole crew would need huge seasons to sniff points at NCAAs.

The big addition is Marwan el Kamash, who transfers in out of South Carolina. He’s probably best in the 200 free (1:34.7 back in 2015), but is immediately IU’s top threat in the 500 (4:17.4) and mile (15:13). Still, el Kamash at this point fits firmly in the category of conference-level threat with the potential for a few NCAA points with a great year.

After a run of dominant IMers, the well has gone a bit dry for Indiana in terms of pure IM threats. The Hoosiers stayed afloat last year by filling their 200 IM slots with specialists from breaststroke (Ian Finnerty), butterfly (Vini Lanza) and freestyle (Blake Pieroni) and performed admirably at Big Tens, with all three in the top eight. But the strategy lost steam in the 400 IM, with the now-graduated Grayson Smith only eking out a single point for IU at the conference level.

The 200 IM has become so stacked nationally that the Finnerty/Lanza/Pieroni trio would have missed scoring at NCAAs even if they had swum best times at the national meet. As it was, Finnerty gained substantial time, Lanza scratched and Pieroni didn’t even enter the event at NCAAs. Without much coming in for IM reinforcements, IU will probably be OK relying on its 200 IMers again at Big Tens, but this is a significant weakness in the lineup at the national level. 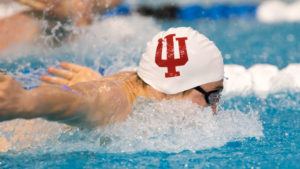 The aforementioned Lanza is at his best in butterfly, where he scored 13 NCAA points and had dual top-3 finishes at Big Tens in 2016. The Brazilian Lanza only joined IU’s competition roster at mid-season last year, so there’s a chance he’s only just starting to get the hang of short course yards swimming.

As far as depth, Max Irwin is a returning Big Ten finalist and is only a step (albeit a big step) away from scoring at NCAAs. Plus, Oliver Patrouch is a decent sprint flyer and fly/breast hybrid sprinter Chris Quarin is an intriguing recruiting pickup.

Backstroke is built in a similar way to fly, with just a bit less national scoring potential. Senior Bob Glover is one of the conference’s best backstrokers, with 46.0/1:41.4 times that are no joke. But with how fast the NCAA has gotten, power creep has Glover still on the outside looking in for national-level points. His season-best 100 back would have scored at NCAAs, but was swum at a mid-season invite, and his season-best 200 was still a half-second out of contention in an NCAA where sub-1:40s have become common.

Depth is very much confined to the conference’s middle tier. Joseph Lane was in a pair of B finals at Big Tens, and Khalafalla crosses over in the 100 back with pretty good speed. 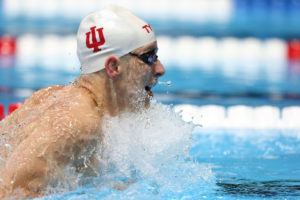 Breaststroke is the team’s other powerhouse event, even with the graduation of double NCAA scorer Tanner Kurz. Ian Finnerty returns after winning the Big Ten title and going 51.7 as a freshman in the 100. The big task for Finnerty is consistency – he faded to 52.6 and then 54.4 in his two swims at NCAAs, and only scored a single point, when his liftime-best would have had him competing for a national title.

Cody Taylor was an NCAA scorer in the 200 breast, but he too regressed from the conference rounds. His 1:52.70 nearly won the Big Ten title, but he couldn’t crack 1:54 at nationals. If Finnerty and Taylor both go lifetime-bests at NCAAs, Indiana is one of the nation’s top-scoring breaststroke groups. If their best swims come at conference again, they’re still probably good enough to scrape out a handful of points on the national stage.

The freshman Quarin is an interesting addition – he’s a relative newcomer to the breaststroke and really only swims the 100 at this point. But he’s shown great aptitude, and could be a candidate to explode in an Indiana system that has pumped out breaststrokers lately, headed by Olympic medalists Cody Miller and Lilly King. 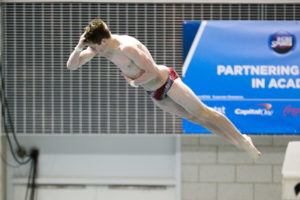 Those two redshirt divers we talked about at the top? They’re back in 2016-2017, and together, they might account for upwards of 75 points at NCAAs. (Together they scored 78 back in 2015). That alone would push Indiana into the hunt for a top 5 spot, and the team only graduates one individual scorer and two relay legs (all from Kurz).

A wealth of talent in the sprints could bring in a huge windfall of relay points for IU, and if the young breaststrokers are ready to race at NCAAs, this is a team that could do some serious damage.

They’ve also got a shot to dethrone Michigan for the Big Ten crown, but in that race, their dearth of true IMers might hurt them. Still, Indiana seems to be better suited for the NCAA’s scoring system and is probably in line to be the top-finishing Big Ten program nationally.

Anyone have predictions for the rest of the top 10?

What’s the effect of the divers on the big 10 race? Should be massive.