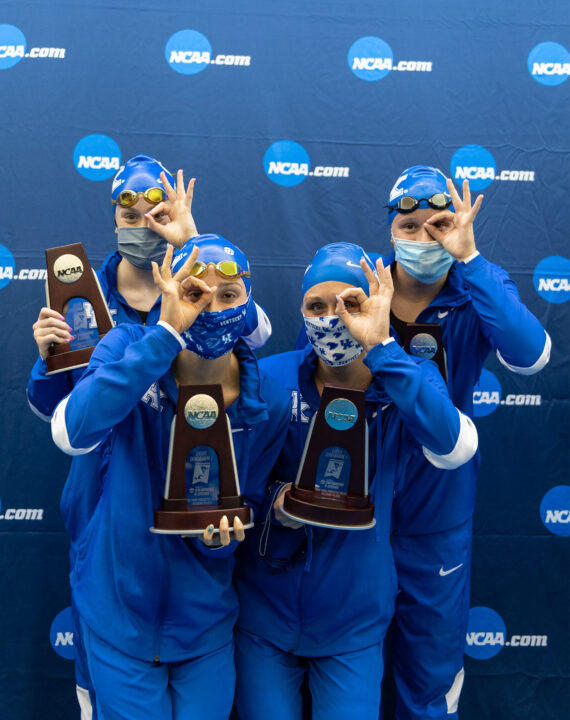 After a one year-hiatus to the uncertainty surrounding the 2020-2021 season, our college previews back! We’ll be previewing the 2021-2022 seasons for the top 12 men’s and women’s programs from the 2021 NCAA Division I Championships – stay tuned to our College Swimming Previews channel to catch all 24.

Back at the 2019 NCAA Championships, Kentucky came in 15th with 100.5 points. Last season, the Wildcats racked up 152 points to finish 11th, just a single point out of a top 10 team finish. Their NCAA finish came a month after Kentucky won its first SEC women’s team title in program history, accumulating 1124 points to beat Florida by 50 points. Kentucky had 12 top-3 finishes at last year’s women’s SECs, also marking a program high.

The team set another program record, earning 14 NCAA qualifiers, only 2 of which were seniors.

Despite coming in 2nd in the 800 free relay at NCAAs last season, Kentucky doesn’t have a whole lot of NCAA scoring power on their roster in the sprint free events. The 200 free is probably their best of the 5 free events. Rising senior Riley Gaines is an excellent 200 freestyler, boasting a personal best of 1:42.70, which is an A-final caliber time any year at NCAAs. Last year as a sophomore, Kaitlynn Wheeler qualified for the B final with a 1:45.72 in prelims of the 200 free. Returning 2 NCAAs finalist to the team this year sounds great, but unfortunately, it seems unlikely as things stand now that a 1:45 200 free will make it back to finals this season. That means Wheeler will have to improve in order to score points for the team again.

Gaines also led the team in the 50 free with a 22.52, and was the only swimmer on the roster under 23 seconds flat-start. The Kentucky staff did a great job bringing in 50 and 100 freestylers with this freshmen class to build depth in the events, however, they’ll have to improve a bit before they’re in the realm of qualifying for NCAAs, let alone get to the point scoring points at NCAAs.

The freshmen class doesn’t bring in too much help in the distance events, however, the Wildcats still have really nice depth in the 500 and 1650. In the 500, both Kaylee Williams and Kaitlynn Wheeler are 4:42 lifetime bests, while Williams also clocked a personal best of 16:23 in the 1650 last year.

Fortunately for the Wildcats, they return their backstroke group from last year. Caitlin Brooks will be back in the fold, and her 51.5 100 back and 1:51.5 200 back put her in position to score again this year. Sophie Sorenson is fresh off an A finals appearance in the 200 back last year, and her lifetime best of 1:50.94 ranked 8th in the NCAA last year. Sorenson is also a 52.02 100 backstroker, which likely puts her just outside what it will take to score this year.

Last year, this squad only scored 6 breaststrokes point at NCAAs, but speed-wise they have the ability to score more this year. Bailey Bonnett picked up a 16th-place finish in the 200 breast, swimming a 2:09.92 in finals, after a 2:08.61 in prelims. Bonnett’s personal best of 2:06.61 would have put her in the A final last year. Similarly, Gillian Davey finished 12th in the 200 breast. Davey swam a 2:05.59 lifetime best last season, and had she done that at NCAAs, she would have finished 5th.

Izzy Gati leads this fly group after winning the B final of the 100 fly at last year’s NCAAs, and qualifying for the A final in the 200 fly. Riley Gaines was the next fastest 200 flyer last season, and she finished 22nd in prelims at NCAAs in the event. Caitlin Brooks is a 52.57 100 flyer. For right now, scoring looks to be up to Gati, but that isn’t a problem as Gati’s times are fast enough to make it back to finals in both events.

IMs were the strongest point on Kentucky’s roster last year, as they scored 37 points at NCAAs between the 200 and 400. The Wildcat had 4 finalists in the 400 IM at NCAAs, including Lauren Poole who finished 3rd. The rest were in the B final, with Bailey Bonnett taking 11th, Gillian Davey 13th, and then-freshman Anna Havens Rice taking 16th.

In the 200 IM, Poole led the squad again, finishing 11th, right ahead of Sophie Sorenson, who was 12th. Bonnett came in 17th in prelims, one spot out of qualifying for finals. Havens Rice took 21st in prelims, while Izzy Gati came in 25th.

The freshmen class doesn’t add too much to this already strong IM group, but with all the scoring swimmers from last year returning, Kentucky should be looking at another big IM haul this year. the depth in these events will also be critical to Kentucky as they attempt to defend their SEC crown.

Kentucky is in the fortunate position of returning all their members from their NCAA relays last year, so we’re largely looking at a “run it back” type of situation this year. That’s great news for the Wildcats, as they were able to grab a 2nd-place finish in the 800 free relay at NCAAs last year. They also came in 10th in the 400 medley, and finished just outside scoring in the 200 medley.

Kentucky didn’t qualify either free relay to NCAAs last year, but this year’s freshmen class might be able to help that. With 4 new 50-point 100 freestylers entering the team, by the end of the season, the Wildcats should be able to put 4 sub-50 100s together for a 400 free relay. That will mark an improvement over last year, where at SECs they had 50.71 and 50.25 splits on the relay. Coming in as a 22.75 50 freestyler, freshman Megan Ciezczak should be able to immediately help the 200 free relay as well.

Kentucky had a massively successful season last year, winning the SEC crown for the first time in program history, and finishing just 1 point out of the top 10 at NCAAs. They are one of the few teams who return all NCAA scorers from last year, and all their relay members.

Kentucky keeping its team almost completely intact from last year is great news as they attempt to defend the SEC title. This freshmen class should help them in that effort, as they specifically address some areas where the 2020-2021 Wildcats lacked depth, like the sprint free events.