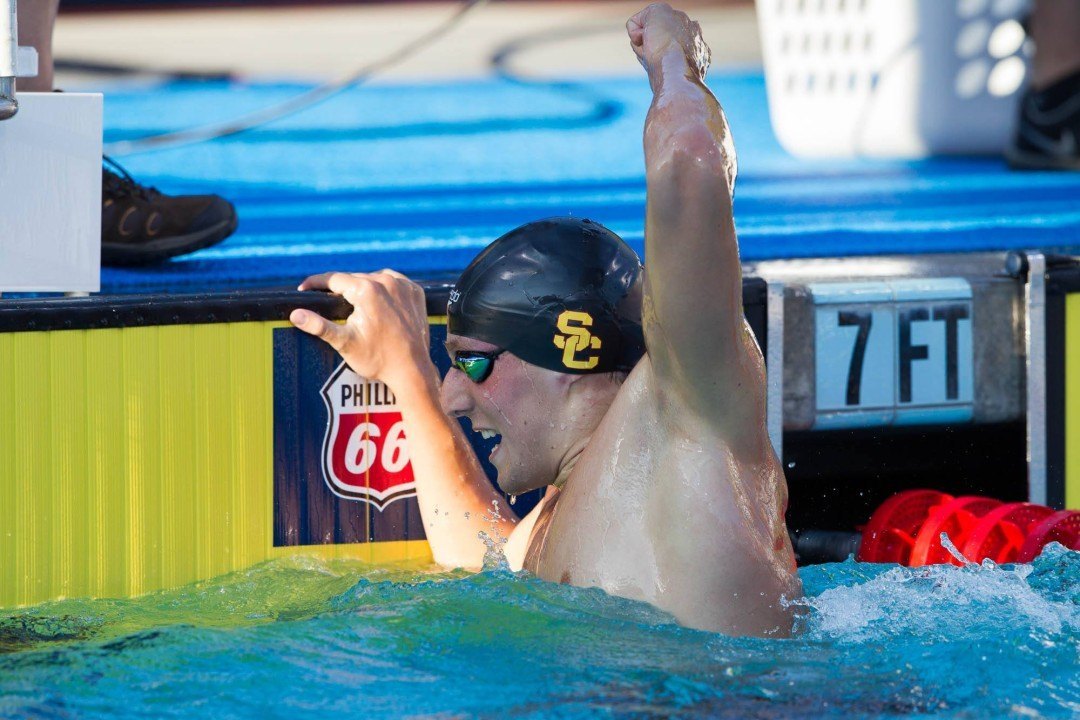 Reed Malone is a familiar face as a battalion of USC Trojans have graduated or will sit out the 2015-2016 season. Archive photo via Tim Binning/TheSwimPictures.com

The 2015 postseason saw a huge rise for the USC Trojans, who fought for the school’s first Pac-12 title in more than 3 decades followed by a 4th-place finish at the NCAA Championships.

The battle was led by the team’s free relays, which won 2 out of 3 national titles, both in last-second comebacks.

Senior Cristian Quintero got a surprise extra year of eligibility and took advantage, winning the 200 free and putting up a round-total of 50 individual points at the NCAA Championships. Malone wound up 3rd in the 500 free, Quintero 3rd in the 100 free and backstrokers Luca Spinazzola and Ralf Tribuntsov put up top-8 finishes individually as the Trojans rolled to a top-4 finish for head coach Dave Salo.

So USC won 3 events at last year’s NCAAs led mostly by underclassmen with only two major point-scoring graduations. That’s a good sign for the future, right?

In this case, though, the answer is only a shaky “maybe.” That’s because Olympic year redshirts have absolutely cleared out USC’s returning arsenal from a year ago.

Quintero is a huge graduation, but losing one major point-scorer is pretty par-for-the-course in the NCAA. Quintero put up 50 NCAA points last year and won an event, plus his legendary freestyle range made him a huge relay asset. But of the Trojans’ two national champion relays, Quintero’s legs were the only two held by a senior.

Unfortunately, only 3 of the 8 legs between those two relays will return, thanks to a couple of notable swimmers sitting out the season to prepare for the Olympics:

A B finalist in 3 events (50 free, 100 fly, 100 free) a year ago, Condorelli had a busy summer, switching his sports citizenship to Canada, winning four medals at the Pan American Games, and putting up one of just four 47-second 100 frees in the world.

But Condorelli also announced he’d be sitting out the coming NCAA season, and there are rumblings he won’t be returning to USC at all.

A member of both NCAA Championship relays, plus a scorer in two individual events and two other relays, Carter will take the 2015-2016 season off to pursue an Olympic berth with Trinidad and Tobago. Carter was perhaps USC’s best hope to replace Quintero in both the 100 and 200 free, especially with Condorelli out.

That- combined with the graduations of NCAA scorers Andrew Malone (breaststroke) and Luca Spinazzola (backstroke)- leaves USC’s Trojan army sorely in need of some reloading to maintain its status atop the Pac-12 and inside the NCAA’s top 4.

Reinforcements Arriving – or are they?

The good news is that USC has an outstanding recruiting class incoming. The bad news? We don’t exactly now how many of those recruits will swim in 2015-2016.

Carsten Vissering won’t join the USC Trojans right away, but should be competing by the second semester. (Tim Binning)

The Trojans earned our 3rd-ranked recruiting class last season, trailing only California and Texas, two teams that have been almost unbeatable in recruiting over the past few seasons. Consider that a huge win for USC, especially with the holes it had to fill in its lineup.

The worry is that the effect of that outstanding recruiting effort might not be felt right away. That’s because the three best recruits in the class – all ranked within the top 10 nationally – are not currently listed on USC’s roster and did not swim at the team’s season-opening dual meet with UCSB.

We knew last February that #4 prospect Carsten Vissering wouldn’t be competing for the Trojans until the second semester. That’s a technique USC has used in the past to fit under the NCAA’s scholarship limits while still putting the best team forward for Pac-12s and NCAAs. Vissering is one of the top breaststrokers in his class, and should have a shot to score at NCAAs instantly with his best time of 52.44 in the 100. He’s also a 1:55 in the 200 breast and a solid IMer.

And there’s #10 prospect Alex Valente, an elite flyer, and yet another absence we have no word on. Valente is an outstanding 46.00 in the 100 fly, and could be one of the few swimmers able to threaten Texas’s choke-hold on the 100 fly A final.

While it appears USC will have to wait some undisclosed period of time to see contributions from those three, the class still has talent even in the back end.

Jamaican national Tim Wynter joins USC’s backstrokers, which should still be strong even after the graduation of Spinazzola. Kyle Grissom and Cash Deloache look like solid butterflyers who can hold things down until Valente arrives, and perhaps form a dominant three-headed butterfly monster in this class down the road. Billy Monjay is a breaststroker who should develop under ‘breaststroke-whisperer’ Dave Salo, and Walker Bell adds some interesing IM/mid-distance free potential.

Despite the damage from redshirts and the uncertainty in the recruiting class, USC still has an outstanding core returning, especially from a solid power-trio of Reed Malone, Ralf Tribuntsov and Michael Domagala.

Malone has been a revelation in two seasons with the Trojans, and only seems to be getting better with time. The 3rd-place finisher in the 500 free on day 1 of NCAAs, Malone actually beat his teammate Quintero, who was the defending NCAA champ. Malone narrowly missed finals of the 200 free, but made the best of it. Instead of swimming two events at Friday night’s finals, Malone could focus solely on the 800 free relay, and came up with his huge split and run-down of NC State for the national title.

As a freshman, Tribuntsov was a breakout star of the Pac-12. In prelims of the 100 back, he destroyed NCAA champ Ryan Murphy and broke the Pac-12 meet record. Though Murphy would knock off Tribuntsov for the title, neither man went as fast as Tribuntsov’s breakout morning performance.

The Estonian national ended up 8th at NCAAs, swimming a tough 100 fly/100 back combo. His presence means the team’s medley relays won’t miss a beat on the leadoff leg, even with the graduation of Spinazzola.

It is worth noting that Tribuntsov was also absent from USC’s season opener, though he’s still listed on the team’s roster. More uncertainty there at a key position.

And then there’s Domagala, who got a chance to compete for Poland at the World Championships this past summer. Domagala scored at NCAAs in the 200 fly, and should have a shot to do so in the 100 fly as well. He swam on the 400 medley relay last year, could take Carter’s spot on the fly leg of the 200 medley and already swam on the NCAA champion 800 free relay.

One area to keep an eye on is the breaststroke, where the team has a tremendous level of talent waiting for the right spark that will put it all on display.

Coming out of high school, Steven Stumph was a blue chip recruit, a former national high school record-holder and a Junior National champion.

Steven Stumph has found his form after a rough freshman year for USC. (Andy Ringgold)

But Stumph had a tough freshman season, failing to hit best times in either breaststroke race. Stumph started to come on as a sophomore, though, winning the Pac-12’s 200 breast title and eventually scoring at NCAAs in the event.

Now that he’s been able to crack his high school bests and officially shed the label of “bust,” Stumph should be primed for a big junior season.

At a different point in a redemption arc is senior Morten Klaskov, who has had two somewhat down seasons after blowing up as a freshman back in 2013. Klarskov just missed scoring in both breaststrokes last year, but has big-time potential if he can regain his freshman form. He did have a lifetime-best in the 200 IM at Pac-12s last year as he develops his versatility.

Then, of course, there’s Vissering, who could be the best of the bunch if he pans out as a freshman. Will a semester-long “transition period” help Vissering to transfer his times better to the NCAA than Stumph did? Only time will tell. But even if Vissering only repeats his high school times without beating them, he should be able to hold down the breaststroke leg of the medleys enough to keep USC competitive.

It’s so hard to project USC this year until we know more about the freshman class. That trio of top-tier swimmers not listed on the roster will go a long way in deciding the Trojans’ fate.

With Vissering, the team fills in arguably its weakest medley relay leg from a year ago. If Tribuntsov is indeed competing, the Trojans should be loaded up on the medleys with the combination of Tribuntsov, Vissering, Davis and Domagala.

The hope for Southern Cal is that the medleys can improve enough to keep the overall relay points stable even though the free relays will likely have a tough time defending their national titles with so many graduations and redshirts.

Reed Malone is maybe the most exciting swimmer to watch on the Trojan roster. He’s a potential Olympic contender with the 4×200 free relay, and has been rising with each season. As a junior, he’s got a shot at NCAA finals in both the 200 and 500 and will be relied on even more on the freestyle relays.

Maybe most interesting will be whether the Trojans can regain the magic they found at Pac-12s last year. With Cal and Stanford continuing to recruit well, there’s no doubt the battle for that conference title will be a competitive one.

Vissering, Mulcare, Valente, Tribunstov are all red shirting the first semester and will return for the second half of the season….so don’t worry.

They are going to need those guys in the 2nd semester with Dylan carter and condorelli not competing this year.