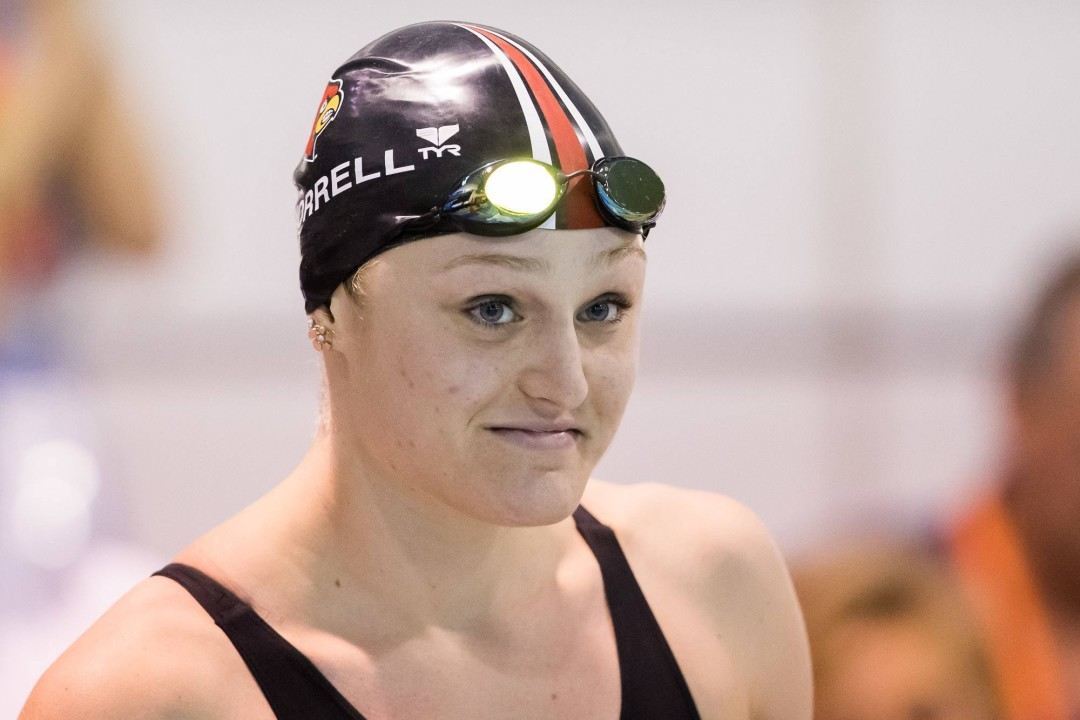 No women's team in the NCAA has risen further than Kelsi Worrell's Louisville Cardinals since 2009. Archive photo via Tim Binning/TheSwimPictures.com

As the 2015-2016 college season begins, leveraging the wealth of data around NCAA performances can help fans better understand the historical context of the collegiate championship season. The analysis below builds upon the previous post, Historical Trends in NCAA Championships: Men’s Edition, with this installment focusing on the past seven years of Women’s NCAA Championships. Analyzing the wealth of data from seven years of NCAA Championship results (nearly two full “generations” of teams) can help to discern key historical trends, inform more accurate predictions for the upcoming season, and serve as an interesting point of comparison with the men’s competition.

The dashboard below shows scoring trends in the top 20 women’s teams at the past seven NCAA Championships. Matching the men’s results, 34 different teams have placed in the top 20 at NCAAs since 2009, though 4 more teams (14 in total for the women v. 10 for the men) have successfully broken through the top 20 barrier every single year: Arizona, Auburn, Cal, Florida, Georgia, Indiana, Minnesota, Stanford, Tennessee, Texas, Texas A&M, USC, Virginia, and Wisconsin.

To dive into the data, hover over any team on the left-hand pane of the dashboard below to follow their performance over the past seven years.

You can view the dashboard on the web by following this link.

At first glance, the women’s results on the whole appear to be more tightly competitive than the men’s competition, but recent trends indicate that the women’s competition is starting to become increasingly more stratified. Only a slim margin of 22 points in 2009 and 19 points in 2010 separated the top three women’s teams in the final standings, while a substantial 142 and 150 points separated the top three teams in 2014 and 2015 respectively. Despite the variety of teams consistently cracking the top 20, this trend of growing disparity indicates increasing dominance by a couple of powerhouse women’s teams, similar to the dominance of Texas and Cal on the men’s side.

The dashboard shows two clear powerhouse teams who have consistently dominated the rankings in past NCAA championships and posted significantly more cumulative historical points than any other team: Georgia and Cal. Georgia posted the highest team score in the past seven years with their 528 championship-winning performance in 2014, while Cal tallied the only other 500+ point performance with their 513 point NCAA win in 2015. Only Stanford has even managed to break through the 400 point barrier in the past seven years, when they scored 402 points to snag second place over Cal in 2014.

In fact, 2010 was the only year that did not feature a championship trophy for either Georgia or Cal in the past seven years, when Florida and Stanford snuck in for first and second place finishes respectively. That 2010 meet was exceptionally competitive, featuring the lowest championship-winning score (382 points) and the slimmest margin between the top five teams (less than 40 points) in the entire dataset. Florida has failed to place above 6th since securing the 2010 championship title (see more below), though Stanford has remained relatively consistent in their team performance over past five years.

As the women’s competition has become more stratified, only a few teams have succeeded in breaking into the top tier of competition. Virginia jumped from 18th place in 2013 all the way up to 5th place in 2015, cracking the top 5 for the first time in the past seven years. Kentucky broke into the top 20 for the first time in 2015—securing a 16th place finish and their largest point total in the past seven years with 95 points—and will look to continue their rise in 2016. The single biggest rise in points, however, came from Louisville, who failed to break into the top 20 until their 15th place finish in 2014 and then rocketed all the way up to 6th place in 2015 on the back of a breakout performance from butterfly star Kelsi Worrell. Interestingly, powerhouse Cal actually posted the third-largest points increase from 2009 to 2015 of all 34 teams, winning the National Championship in 2009 with 411 points and then jumping up by over 100 points to win again in 2015 with a dominating 513 points (their largest point total and second-largest in the entire dataset).

Conversely, multiple teams have seen their competitiveness fall in the past seven years. Arizona dropped from 3rd place in 2009 down to 15th in 2015, while Auburn dropped from 6th place in 2009 to 18th place in 2015. Florida won the national championship in 2010, but has failed to crack the top 5 since then, settling for 9th last year. Texas dropped from 307 points in 2009 down to 164 in 2015, though still managed to secure a 7th place finish compared to their 5th place finish in 2009. Multiple teams—including the University of Michigan, Princeton, Houston, and LSU—have failed to crack the top 20 since 2011.

Editor’s note: The University of Washington also hasn’t cracked the top 20 since 2011..but that’s because they cut their program in 2010.

Combining the trends outlined in the dashboard with SwimSwam’s series “Ranking the 2015 Women’s NCAA Recruiting Class” raises a few interesting points as we look forward to 2016:

With multiple notable recruits deferring their college enrollment and several current top NCAA performers choosing to take a redshirt year in order to focus on preparing for Rio in 2016, the upcoming NCAA season will provide interesting perspective on the impact of the Olympics on college competition. History tells us that the NCAAs will continue to be very competitive, and fans will see in March which teams have what it takes to continue their dominance, reverse their fortunes, or rise to the challenge on the national stage.

Not sure why Wash U is on this chart. They are a Division III school. Maybe you are referring to University of Washington? If so, the program was cut in 2009 which explains why they didn’t place at the NCAA championships after that year.

It should be the university of Washington. Showing that the university cut a program that was performing well given the facilities and lack of support from the administration.

Randy is a data visualization enthusiast and a lifelong swim nerd. He hails from southwestern Pennsylvania where he spent a majority of his time at a pool, swimming competitively for over ten years as a breastroke specialist, teaching swim lessons, and coaching his local summer club swim team. After retiring …

More from Randy Crooks
See All