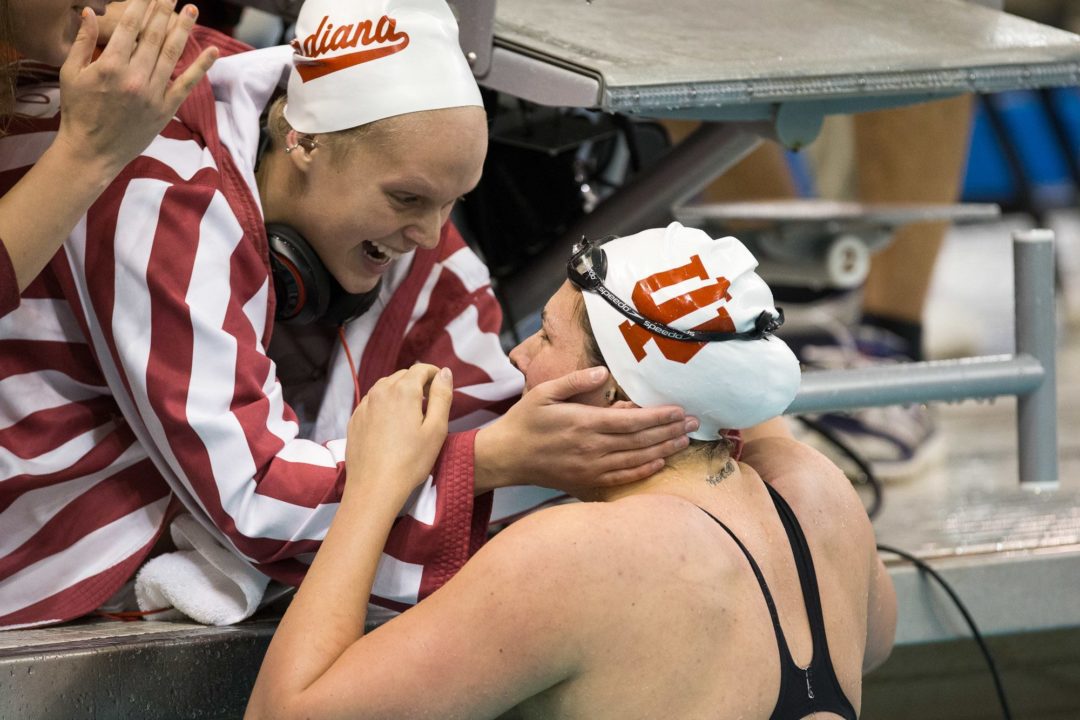 Canadian Brooklyn Snodgrass will look to lead Indiana to their first B1G Ten title since 2011 this season Archive photo via Tim Binning/TheSwimPictures.com

Paul DeLakis won a pair of Big Ten titles in the 200 free and 200 IM in 2021. He will now step away from swimming to pursue a career in optometry.

Wisconsin head swimming & diving coach Yuri Suguiyama received a contract extension through 2024: a vote of confidence for the Badgers coach.

During her tenure at Minnesota, more than 100 women’s student-athletes have earned All-America recognition, totaling 450.

Ryan McNutt will swim for Penn State beginning in fall 2022. He is a rapidly-improving freestyler with Futures cuts in the 50/100/200 free and 100 fly.

Coming off a successful 2014-15 season, the Indiana Hoosiers look poised to be even better this year. With incoming rookies Lilly King and Miranda Tucker giving them two high quality breaststrokers, something the team desperately needed last year, Indiana should perform much better at Big Ten’s and NCAA’s this year.

Indiana had some very impressive performances at Big Ten’s last year, yet fell just short of the title, finishing 2nd to rival Minnesota. Top performers were Canadians Kennedy Goss and Brooklyn Snodgrass, freestyler Haley Lips and butterflyer Gia Dalesandro. Goss, a freshman, won both the 200 and 500 freestyles, with  junior Lips finishing runner-up in both events. Sophomore Dalesandro had very good performances in the fly events, finishing 2nd in the 100 and 1st in the 200. Reigning NCAA 200 back champion Snodgrass swept the backstroke events in her junior year. Also providing a big help was freshman diver Jessica Parratto, who finished 1st, 2nd and 4th in the diving events. Maybe the most impressive performance from the team was done on the first night, as the 800 free relay team consisting of Lips, Goss, freshman Grace Vertigans and Snodgrass won the race and set a new B1G record in 6:59.10. Goss earned Big Ten freshman of the year for her performances.

Indiana’s Achilles heel last year was their breaststroke, and it really hindered their medley relays. They were just 9th in the 200 medley. Then they had a better performance in the 400 medley where they would’ve been 5th, but  they ended up getting disqualified. The problem was highlighted with top breaststroke swimmer Claudia Dicaupa’s 24th place finish in the 100 breast, the best result for the Hoosiers in the stroke at the meet. Losing to Minnesota by just 27.5 points, it’s safe to say had Indiana’s medley relays been more competitive they would’ve had a shot at the title.

Indiana came back at NCAA’s defeating all of their Big Ten opponents, including Minnesota, finishing 10th overall. Goss, Snodgrass and Dalesandro led the way again, with Goss (5th-200 free) and Dalesandro (6th-200 fly) each earning one championship finals appearance, and Snodgrass (4th-100 back, 8th-200 back) earning two. Parratto had another impressive diving performance, winning the Platform event to go along with 7th and 13th place finishes in the 3-meter and 1-meter, respectively. The 800 free relay performed well again, if not quite up to the standard they set at Big Ten’s. Lips, Goss, Vertigans and another freshman Delaney Barnard finished 6th, contributing a valuable 26 points. However, it’s worth pointing out their 6:59.10 from Big Ten’s would’ve put them in 3rd.

The team showed great depth in the backstroke events, with 3 swimmers in the 100 back and 7 in the 200 back, but lacked any entries in the 50/100 free, 100/200 breast, as well as the 200 free relay and the medley relays. While they are losing some of their backstroke depth this year, they will be much improved in breaststroke and thus the medley relays as well.

As mentioned earlier, Kennedy Goss and Haley Lips lead the way for Indiana in the freestyle events, with great performances at Big Ten’s and NCAA’s. But there is much more depth on the squad in the freestyle events. Delaney Barnard and Grace Vertigans were both freshmen last season, but came through with some big performances when the team needed them. Vertigans swam on the Big Ten record setting 800 free relay, both the 400 and 800m relays at NCAA’s, and was 10th in the 100m free at Big Ten’s. Barnard was 11th in the 200 free at Big Ten’s, and then subbed in for Brooklyn Snodgrass at NCAA’s on the 800 free relay, as the team finished 6th. Both Lips and Snodgrass are going into their final season with Indiana, but the three other ladies will be leading the charge on IU relays for years to come. They also have some more up-and-coming freestylers going into their sophomore season that could make the jump up to the NCAA level. Gabriela Rijec, Alexandra Rockett and Holly Spears all posting solid sprint freestyle results in their rookie years. Joining these ladies this year will be rookie freestylers Allison Cunningham, Shelly Drozda and Hannah Sakaluk.

As we know, breaststroke was a major problem for the Hoosiers last season. They had no breaststrokers compete at NCAA’s, therefore no medley relays, and only had one breaststroker finish in the top-40 at Big Ten’s. Ray Looze and company have addressed the problem heading into this season, recruiting two of the top breaststrokers in this year’s rookie class. Lilly King and Miranda Tucker come in with personal bests of 59 seconds in the 100 and 2:09 in the 200, times that blow away the best Indiana had to offer last year. Adding these breaststrokers will put together a lethal medley relay, with backstroke star Brooklyn Snodgrass, butterfly specialist Gia Dalesandro and IU’s wealth of talent in freestyle. This makes them the favorite to win the medley relays at Big Ten’s, when last year they weren’t even in the conversation. This also puts their NCAA medley relays into prime scoring position. Of course, we can’t forget the individual points King and Tucker will contribute at all meets including NCAA’s. King is coming off a breakout performance at US Nationals in San Antonio, as she finished 2nd to Katie Meili in 1:06.69 in the 100. Tucker also had a good showing in San Antonio, finishing 13th and 11th in the 100 and 200 respectively.

For the last few years Indiana has been revered for their backstroke depth, especially at the Big Ten Championships. Last year at Big Ten’s, they had 4 swimmers in the top-8 and a total of 6 in the top-16 in the 100 back. In the 200 back they had even more, with 5 in the top-8 and 2 more in the top-16. They also had 10 backstroke entries (3-100, 7-200) at NCAA’s, with 3 of them scoring points.  The teams top backstroker Brooklyn Snodgrass still has another year left, but Indiana will be losing a lot of their depth this season. Seniors from last season Cynthia Pammett, Allie Day, Justine Ress and Dorina Szekeres will all be missed greatly this year. They are the teams 4 graduating swimmers, and all competed in backstroke at NCAA’s. Ress scored individually, finishing 12th in the 100 back. All 4 were very valuable at Big Ten’s last season as well, as they all scored individually. In the 100 back Ress was 5th, Day 6th and Pammett was 16th. In the 200 Day was 3rd, Pammett 4th, Ress 8th and Szekeres 9th. Szekeres was also 5th in the 400 IM. Those are some valuable points that will be greatly missed this season.

Hailing from Toronto, Ontario where they swim short course meters rather than yards, Kennedy Goss had an incredible rookie season with the Hoosiers. She lit up the pool at the Big Ten Championships, winning both the 200 and 500 yard freestyles, finishing 7th in the 100, and swimming on 3 relays including the Big Ten record setting 800 free relay. After winning 3 golds and 1 bronze, Goss was named B1G Freshman of the Year. Goss continued the momentum heading into NCAA’s, scoring in the 200 free (5th), 500 free (14th) and the 800 free relay (6th). After a successful summer where she qualified for her first senior national team swimming on Canada’s 800 free relay at the World Championships, Goss will look to keep the momentum going into her second year with Indiana.

The Hoosiers are looking good coming into the 2015-16 season. The four graduating swimmers were all valuable, but the incoming rookies will make up for the loss.

Breaststrokers Lilly King and Miranada Tucker will prove to be the most valuable, as the team was lacking any scoring from the breaststroke events last season and their medley relays suffered greatly.

They are losing none of their relay swimmers from last seasons NCAA’s, and losing just one individual scorer (Justine Ress, 12th 100 bk). After fielding just 2 relays last year, they could potentially field a full 5 this year, and have a good shot at scoring in all but the 200 free relay.

With all bases covered in fly, back, breast and free, the Hoosiers will be tough to beat at Big Ten’s this year. Despite lacking a true top tier IM’er, they have many girls who can step in and put up points in the IM events at Big Ten’s. Incoming breaststrokers Lilly King and Miranda Tucker are also both capable of swimming a fast 200 IM. Indiana will be looking to win their first B1G title since 2011, as Minnesota has won the last four straight. After narrowly losing out to the Golden Gophers at Big Ten’s, they took them out by 8 points at last seasons NCAA’s.

As for NCAA’s, Indiana has many returning point scorers from last year and some returning who could potentially score for the first time this year. On top of that, King and Tucker could potentially both finish in the top-8 in the 100 and 200 breast, giving the team a massive boost in terms of points. They certainly can move up from 10th and do battle with Florida, Texas and Southern Cal.

It’s about time…what a wonderful article! Don’t underestimate the Hoosiers this year!

I half expected Snodgrass to redshirt this year. Canadian back is pretty loaded, but she could be on the Olympic team next year. Long course is a beast.

With Ray Looze and team at IU and the history of producing Olympians, probably one of the best places to be for Snodgrass. Well written article James #avalanche:)

All of the articles about the top college teams have been thorough and overall very well done. I look forward to reading them each day. Keep up the good work.