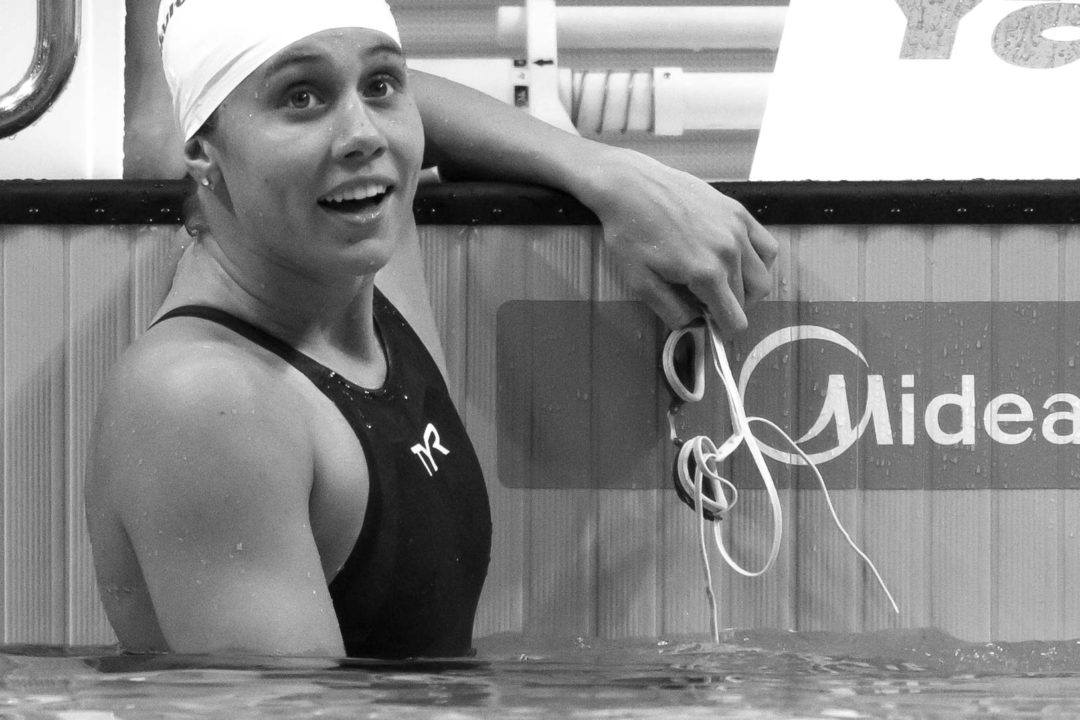 After her breakout year both on the NCAA and the world stage last year, the sky is really the limit for Mallory Comerford, who will rematch some of the best swimmers in history in the freestyle events. Current photo via Mike Lewis/Ola Vista Photography

Last season, led by a Mallory Comerford in the midst of her world-class breakthrough, the Louisville women tied their Kelsi Worrell-era 6th from 2015 for the highest overall finish in program history.

Comerford scored, either individually or as a member of a relay, 153.5 points of Louisville’s overall 194.5. From the very beginning of the meet, it was clear that she was at peak form; she threw down the fastest 800 free relay split of a crowded field (1:40.21) to lead Louisville to eighth in the event. She went on to finish fourth in the 500 free and third in the 100 free.

And, who could forget that individual 200 free performance? Despite taking the race out over half a second slower, Comerford unleashed a monster back half to tie THE Katie Ledecky for gold in the 200 free (1:40.36).

Senior Andrea Cottrell was the other big scorer for the Cardinals, with fifth in the 100 breast and eighth in the 200 breast.

The Cardinals’ down-the-roster depth placed them in the A final of four relays, culminating in a Alina Kendzoir, Cottrell, Grace Oglesby, and Comerford’s fourth-place finish in the 400 medley.

Mallory Comerford has more than a few options for her NCAA lineup this coming season, and while it is unlikely she will take on the full sprint freestyle program 50-100-200, she would be in the running to place in (or win) any and all of those events.

Comerford is least likely to swim the 50, despite finishing sixth overall in the event at U.S. Worlds Trials this summer. The only swimmers from that A final who finished ahead of Comerford in that race and who will swim at NCAAs are Simone Manuel (the likely champ) and Abbey Weitzeil.

Sophomore Casey Fanz finished in the top 30 in the 50 last year (22.37), but she’ll have to drop below 22 to make the B-final. The Cardinals combined for sixth in the 200 free relay in 2017, and the whole team will be returning this year: Lainey Visscher, Comerford, Avery Braunecker, and Fanz (1:27.52). Likewise, the defending sixth-place 400 free relay of Visscher, Comerford, Fanz, and Nastja Govejsek will all be returning this time around (3:11.97).

The 100 free will be all Comerford. Last season, she finished third in 46.35, but this time around, second-place Olivia Smoliga, fourth-place Lia Neal, fifth-place Farida Osman, and sixth-place Chantal Van Landeghem are all out. Not to mention that Comerford was the national champion this summer ahead of Manuel, breaking American and U.S. Open records before Manuel took the American mark back for the gold in Budapest.

Comerford and Braunecker will return to the eighth-place 800 free relay, but the team will have to replace now-graduated Abbie Houck (1:45.34 PR) and Alex Sellers (1:46.39 PR).

Going into 2018, Comerford will have a legendary performance to defend after her monster come-from-behind 200 free tie with Katie Ledecky, 1:40.36. Given her swims this summer, including a fourth-place at Worlds Trials (behind Ledecky, now-graduated Leah Smith, and pro Melanie Margalis, but ahead of Manuel), she should be up to the challenge.

Mallory Comerford will likely have to choose between the 50 and the 500 for her third NCAA event. Last year, she swam the 500, coming up fourth in 4:36.16. (She declared a false start at Worlds Trials over the summer, but the above letter grade for the Cardinal’s distance program depends on Comerford choosing the 500 over the 50.) If she swims the 500 next year, she will be fighting with Indiana’s Kennedy Goss, last year’s third-place finisher, for the silver medal behind Ledecky.

Two-time German champion and incoming freshman Alina Jungklaus has been 16:00.18 in the short course 1500m free, which converts to 15:54.45 in the 1650 free. Her fastest time would have placed eighth last year, so she is a crucial add to the Cardinals’ distance program. Jungklaus’s short course 400m free (4:07.45) converts to 4:42.80, which would have placed in the top 40 last season. However, 400m to 500 yard conversions aren’t quite as reliable as some other events, and freshmen often see a performance bump, so Jungklaus could be one to watch in the 500 as well.

Though the Cardinals don’t quite have an automatic scorer in their IM roster, they do have a deep group of swimmers with potential.

Rachael Bradford-Feldman is the most likely to final of the group, after finishing 22nd in the 200 IM at NCAAs and just missing the B final last year (1:56.99). She was 33rd in the 400 IM with 4:12.41, so that final is more of a long shot. Though her fellow junior Alina Kendzoir scratched the 200 IM at NCAAs last year, she has been 1:57, so she could also see the final with improvement.

Other 200 IMers down the roster are 1:59 swimmers Maria Astashkina (converted time), Carly Lowe, and Grace Oglesby. Alina Jungklaus is the top 400 IMer behind Bradford-Feldman, but she will have to improve her (converted) 4:12 to a low 4:08 to make the B final.

Freshman Carley Lowe’s best time in the 200 fly coming into college is 1:56.59, which would have been 24th at NCAAs. If she can improve to 1:55, she could also score some points.

It can also be fun to speculate what Mallory Comerford would do in the 100 fly here, though it may be unlikely she swims the event at NCAAs (and it’s not calculated into our overall grade). Her best SCY time is 53.32 from the UofL Invite in 2015. However, she finished third at U.S. Worlds Trials this summer with 57.97, behind only her former teammate Kelsi Worrell and the now-graduated Sarah Gibson of Texas A&M. Comerford’s June Worlds Trials performance converts out to 50.96. The only non-graduated NCAA swimmers who were faster than that at 2017 NCAAs were USC’s Louise Hansson (50.45) and Cal’s Noemie Thomas (50.65) and Stanford’s Janet Hu (50.81).

Last season, Alina Kendzoir set the 100 backstroke school record in her 400 medley relay lead-off, swimming 52.09. Though she scratched the actual event, her lead-off time would have been 21st overall, which gives her some scoring potential. She was farther off in the 200 back last year with 1:53.64 (28th overall).

Freshman Ashlyn Schoof may take over the 100 back record, though, as her best time is a potential B-final 51.98. She struggled in her senior year of high school, but she comes in with the best 100 back time of anyone in the nationwide recruiting class.

Former junior world record holder and European Games gold medalist Maria Astashkina of Russia was a huge recruiting get for head coach Arthur Albiero. Her 2:23.06 200 SCM breaststroke converts to 2:08.88 in yards (which would have been 12th at 2017 NCAAs), and her 1:05.53 SCM converts to a 14th-place 59.03. Astashkina will have big shoes to fill, as now-graduated Andrea Cottrell was fifth in the 100 and eighth in the 200 last year.

Rachael Bradford-Feldman could potentially make the B final of the 200 breast; she finished 21st last season in 2:10.32.

After her breakout year both on the NCAA and the world stage last year, the sky is really the limit for Mallory Comerford, who will rematch some of the best swimmers in history in the freestyle events.

Down the roster, Louisville will have to recuperate from graduating their second-biggest scorer Andrea Cottrell, but their strong recruiting class should be up to the challenge. Their solid relays and potential for B-final swimmers make Louisville a contender for the top five going into the 2018 season.

Comerford didn’t have the American record for over a month, she had it for a few days after she set it leading off the 400 free relay at worlds. Then manual took it back in the 100 free final. Comferford set the US Open record at world trials, which she still holds.

She didn’t have the American record for a month, that was the US open record. While she did have the American record, it was for a few days not a month.
I’m excited to see what else she will do. She’s very rangy, more so than Manuel. Looks like she’s come in to take the place of Abby, though Abby might have something to say about that this season.

i think you meant third in the 100