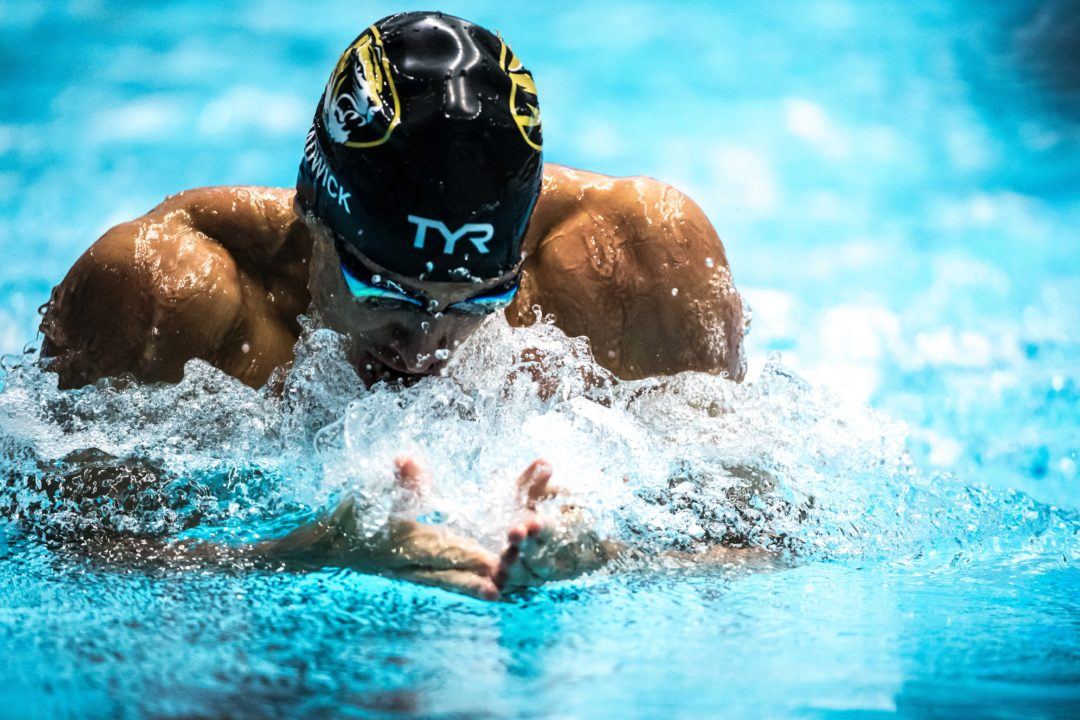 Michael Chadwick will be the biggest loss for Mizzou this season. Archive photo via Mike Lewis/Ola Vista Photography

Boasting one of the best senior classes in the nation last year, the Tiger veterans took them to 9th at NCAAs, finishing 3rd among all SEC teams behind only Florida and UGA.

Michael Chadwick came up huge for the Tigers, racking up 36.5 points on three individual swims. His biggest swim was a runner-up finish to Caeleb Dressel in the 100 free, breaking 41 seconds in the process, while he also A-finaled in the 50 free and B-finaled in the 100 breast.

In that 100 breast, Fabian Schwingenschloegl put down a runner-up finish as well, touching 2nd behind Will Licon. Andrew Sansoucie was another A-finalist for Mizzou in the 100 fly, while the three of them teamed up with freshman Daniel Hein for some deadly medleys– they grabbed 3rd in the 400 and 4th in the 200.

Meanwhile, Carter Griffin came through for a top 8 finish in the 200 back to round out the Tigers’ individual scoring, which was made up entirely of seniors.

Chadwick’s departure is an obvious big hit, and Sansoucie was also a notable part of the sprint free relays.

Luke Mankus and Sam Coffman return from the NCAA 200 free relay, having split 19.0 and 19.6, respectively, with flying starts. It took a 19.2 to score in the 50 at NCAAs, and Mankus has been 19.6, so a B final appearance for him next year isn’t out of the question.

Davis was far and away the best distance swimmer for Mizzou, and he just graduated. There is some help on the way, though, thanks to a freshman and a transfer.

Carter Grimes of Sandpipers of Nevada, a club known for producing distance talent, will join up as a freshman this fall. He’s been 4:23 in the 500 and 15:13 in the mile, well off of scoring times, but he made the 2016-17 US Junior National team for the 10K open water and he has potential.

Meanwhile, Jacob Wielinski is coming off of a great sophomore season at North Dakota. He won the 2017 WAC title in the 1650 with a 14:59.09, a time that is seven seconds better than Davis’ program record. He’s 12-13 seconds off of what scored at NCAAs last year, although he’s riding an improvement curve that could soar with his new training home in Columbia.

There isn’t much of an IM base in Columbia this year, as Chadwick (1:43.0 in the 200) is gone, and even with Chadwick in the mix, there was no potential for NCAA points as he swims the 50 at champ meets.

Grimes has been 3:49 in the 400 IM, which will likely be his third event to go with the 500 and 1650. There will definitely be a Mizzou presence at SECs in the IM’s, but the Tigers will be hard pressed to score nationally.

Like most of the strokes here, a graduation takes most of the edge out of this group, with 100 fly NCAA A finalist Andrew Sansoucie no longer part of the picture.

Sophomore Micah Slaton was the team’s top 200 butterflier last season and he returns as the fastest 100 flier, too, with bests of 46.6/1:44.3. Slaton might not be able to score at NCAAs, but he’s not terribly far off that level, and he’ll be a solid fly leg on medley relays. Another sophomore, Daniel Hein, has been 46.8 in the 100, though he is much better suited for the backstrokes.

As mentioned, Daniel Hein is one of the few returners who helped contribute points at NCAAs last year, albeit only on relays.

Sophomore Nick Alexander will be important, too, with bests of 47.4/1:42.6. His 200 is the best on the team right now, just a hair better than Hein, and backstroke is looking like the team’s biggest strength this season. Juniors Alex Walton and Griffin Schaetzle are both 1:43 backstrokers, too.

Meanwhile, Jordan O’Brien isn’t too far behind Groters at 53.1/1:58.1, both times coming from the Mizzou Invitational in November of 2016. Additionally, freshman Ryan Geheb brings in times of 54.8/2:00.7, and he could drop a bunch in his first year at Mizzou.

There’s no getting around the graduation losses for Mizzou, and the freshman class is solid, but they can in no way make up for all of the A-final national scoring power that’s no longer with the Tigers.

There are still some bits and pieces from last year, and Wielinski is an exciting add, as he’s already the best distance freestyler the team has ever seen. His pairing with freshman Grimes could turn into something special, too.

Mizzou could still score some relays at the national level, but other than potential individual scoring from Hein, Schreuders and maybe a breaststroker, that will probably be the limit for them this season.

No way to sugar coat it – this is going to be a rough year for Mizzou. A top 20 finish would be a good result for them in 2018.

It’s kind of funny to think about – before Rhodenbaugh came in and had a couple years to establish himself, it was a great year for Mizzou if they could get a single swimmer to NCAAs.

With the success he’s had a developing guys, though (Chadwick was definitely not blue-chip coming in, neither was his last all-around star Tierney), I’d bet they at least put together some scoring relays.

It seems like a rough description. I don’t see how they could be ahead of Alabama if you compare the two articles

The rankings are based on last year NCAA finish. I personally agree though that it’s confusing, and looking at this article I think it makes no sense to slap the #9 number on this year’s team.

Thanks, I realized after I posted that they are probably going off of how they placed at NCAA’s

I agree that many of the rankings make very little sense for teams that are projected to place much lower, like Missouri men, or much higher, like Michigan women. I do think that this is probably the most noncontroversial way to rank the teams though. It might be less confusing if they put in the article that the rankings are from last year.

They only do it in the very first sentence. It’s unreasonable to expect us to read anything past the headline.

When will you put up USC’s preview? Based on the original pattern it was supposed to be yesterday.

Hannah – coming tomorrow morning! We had Mizzou ready a little earlier and went with that one first.