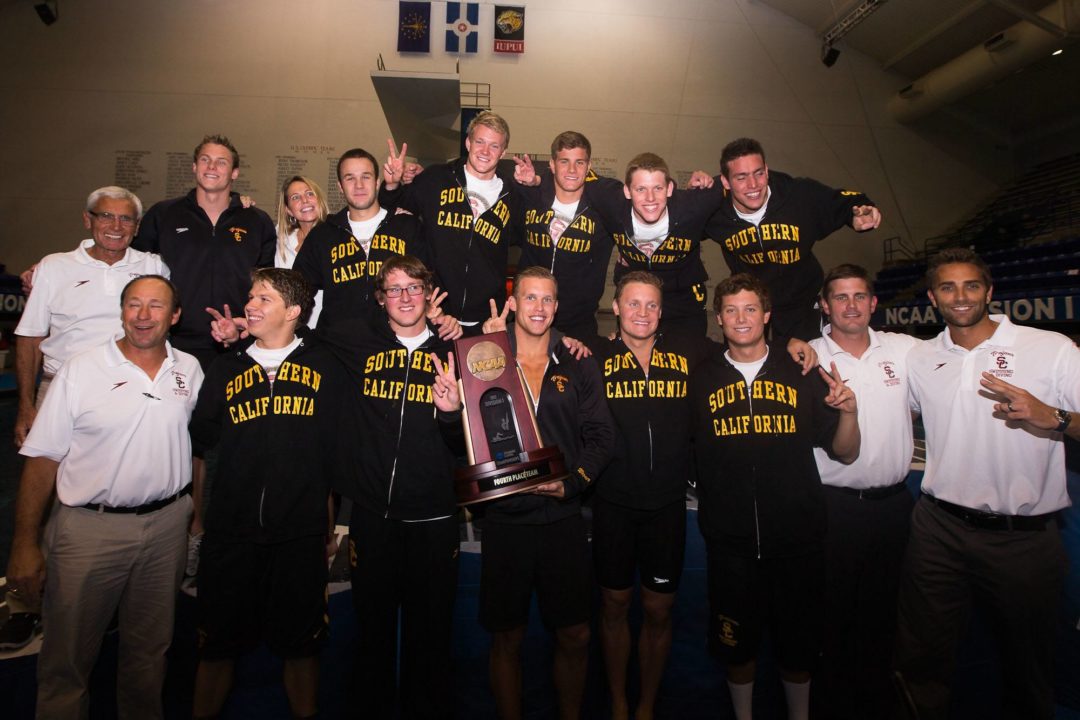 The USC Trojans finished 4th at NCAA's last year, and will now have to work together to replace Vlad Morozov.

2012-2013 Lookback: Vlad Morozov. Enough said. He had quite the year in his junior campaign, and rightfully so he has now since declared his professional career.

Let’s start to recap his year. He had the fastest-ever relay split in the 200 freestyle relay race, marking a 17.86 on the Trojans’ third leg. Easily that swim right there was the swim of the championships – heck, it made ESPN Top 10 plays the next morning.

With Sergio Lujan-Rivera coming into his own as an elite breaststroker (he split 52.30 on USC’s 400 medley relay, and was 17th in the individual 100 in 53.49), that allowed Colupaev to go back to focusing on his primary sprint freestyle races in the 2012-2013 season.

He was masterful; He and junior Cristian Quintero will bookend a great 800 free relay, where last year Colupaev led off in 1:33.23 and Quintero anchored in 1:32.40. They’re going to need help in between to win that 800 free relay at NCAA’s in 2014 (they were 3rd last year), but those two were the fastest on their respective legs in the entire field.

Quintero, last year, was also very sharp in two of his three races, but USC really needs him to go three-for-three. He was 4th in the 200 yard free in 1:33.24, though none of the top 6 swimmers from last year’s national championship meet graduated.

If there was a little stumble in Quintero’s meet, though, it was the 1650. He took 14th in that race in 14:55.19, but his season best was over three seconds better and would have nudged him into the top 10. He’s capable of sub-15:50, in the very least, in the distance race, and so in an otherwise spectacular sophomore season, that would be the area that he could look at for improvement.

Given that he lead off the 400 free relay in 42.81, Quintero may end up swimming that 100 free individually this year instead of the mile. It probably would have netted him more points at NCAA’s last year, though distance entries are usually a ‘safer,’ more conservative entry.

It Takes a Village: Jack Wagner, who is one of the three seniors captains for the Trojans this year, really emerged in the sprints last year. With that new focus, he qualified in the 50 freestyle (27th) and 100 freestyle (31st) and 200 freestyle (38th) this past season. With the graduation of Vlad and the focus Wagner has shown, his senior year easily can end with scoring individually in the 50 and 100.

It’s going to take a village of swimmers to replace Vlad. No one swimmer with any collegiate eligibility left would be good enough to replace him, but the tradeoff is that outside of him, they didn’t lose a ton. Lendrum was the only other relay swimmer to graduate, and he was the 4th-best leg on the 800 (a 1:35 that will be easily replaced by the freshmen).

As a freshman, Davis showed good relay fortitude, and this year, USC will need him to step into a bigger role for the team, including scoring in the 100 fly, and possibly being a go-to option for the 400 free relay as well.

The Trojans almost had three swimmers in the 100 breaststroke finals. In addition to Vlad and Klarskov, Sergio Lujan-Rivera was the first-man out, finishing 17th after the morning session.

Just a year removed from a time when Dave Salo, one of the best breaststroke coaches in the world, struggled to fill that spot on his men’s medley relays, they now have depth in that event.

Lujan-Rivera wasn’t the only swimmer to just miss scoring points. Sophomore Luca Spinazzola also had a heart breaking 17th finish in the 100 backstroke. The night before he split a 46.36 on the 400 medley relay that broke legendary backstroker Lenny Krazelburg’s team record. That was a huge goal for Spinazzola all year.

He has developed great under Salo, coming out of high school with a 48.52 and dropping two seconds in two years. With continued confidence from both of his NCAA swims, and focus on excellent underwaters, he should also break into the Top 16 this season. He will need to improve in the 200 though, after finishing 33rd last season.

Chad Bobrosky qualified for NCAAs in the 500 freestyle (39th) and 200 backstroke (29th) individually, while also swimming on the 3rd place 800 freestyle relay.

Freshmen: Nobody can quite figure out how Dave Salo managed to pull in such a huge, talented class. USC was a no-brainer #1 recruiting class in the nation. So where do we start?

Then there’s Santo Condorelli from the National High School Record setting Bolles relays in Jacksonville. It will take more-than-one to immediately replace Vlad Morozov’s value, but this team has more-than-one to do it, beginning with Condorelli’s 19.8 and 43.4 in the 50 and 100 yard freestyles, plus a 47.2 in the 100 fly.

And if all of that isn’t enough, at the semester they’ll add Dylan Carter from the Davie Nadadores in South Florida, who goes 19.9/43.8/1:35.2 in the 50, 100 and 200 yard freestyles, plus 47.2 in the 100 back (he’s the best backstroker in the class outside of Murphy and Conger), and all of this with him being still very green to yards swimming. He’ll be one of the youngest swimmers in the class, and could give USC’s sprint backstroking the stability it’s been needing for a few years (though Luca Spinazzola ended with a great swim at NCAA’s last year).

Carter is also the swimmer we’ll focus on to fill Lendrum’s spot on the 800 free relay. He should be an upgrade on that leg right away, and that’s even with a very limited amount of time spending in yards training after moving to Davie.

Also filling out that backstroke group is Israeli Olympian and European Championship medalist Yakov Toumarkin, who didn’t get accepted in time for the 2012-2013 season, as had hoped, but is 54.1 and 1:57.3 in the 100 and 200 backstrokes in long course. Those convert to immediate-scoring times at NCAA’s in yards. He will be coming in at semester, which is just in time for the championship season.

Doing some math real quick, those guys alone, without accounting for relay starts and freshman year improvements, could put together a 3:11 medley relay, and a 6:22 800 free relay. That 800 relay would’ve been in the top 10 at NCAA’s last year.

And there’s a lot of different combinations that could get them there.

If there’s one mark on the class, is that it’s pretty small: there’s not a ton of the guys who will fill out the roster to help win dual meets. When the Trojans spend the next few years in the top 6 at NCAA’s, though, they might not be too worried about that.

Diving: While there has been strong diving on the women’s side in SoCal, the men had no divers qualify for NCAA’s last year. Their dive team is still very young, the oldest being junior Jordan Gear. He has qualified to Zones in his two years, and has the potential to qualify for NCAA’s in the platform events.

2013-2014 Outlook: A lot of special things are in store for the Trojans this year, one clearly being the completion of the Uytengsu Aquatics Center in February. When you think about the program, in a matter of seven years, Dave Salo was able to transform the Trojans from a single-digit point scoring team, to now one in the top 4.

But now is the challenge is to remain in the top 4. And it is going to be tough. First off, the Trojans will be looking to their freshman class for points. And to be honest, while freshman on paper may be very strong and seem like a no-brainer on the national level, it is never a totally clear indicator how they will do at the NCAA meet.

No doubt about it the Trojans will be hurting with the absence of Vlad. But can the team band together to replace his spot, since he is irreplaceable. On paper the Trojans can bring home another top-four trophy, but the top 5 or 6 teams will all be battling this March. With the freshman class, the depth of top-end college swimmers on this team is probably as deep, or deeper, than we’ve ever seen.

We like USC to be somewhere around that 4-5 spot again in this developmental year. Yes, they lost a big one in Vlad, and that’s a significant loss, but with the 17th place finishes and all of the freshmen, there’s huge upside for this team.

Good recap, but I don’t think Morozov’s 17.86 was easily the swim of the meet. Kevin Cordes had a couple even more unprecedented swims.

Yakov Toumarkin is not coming to USC …