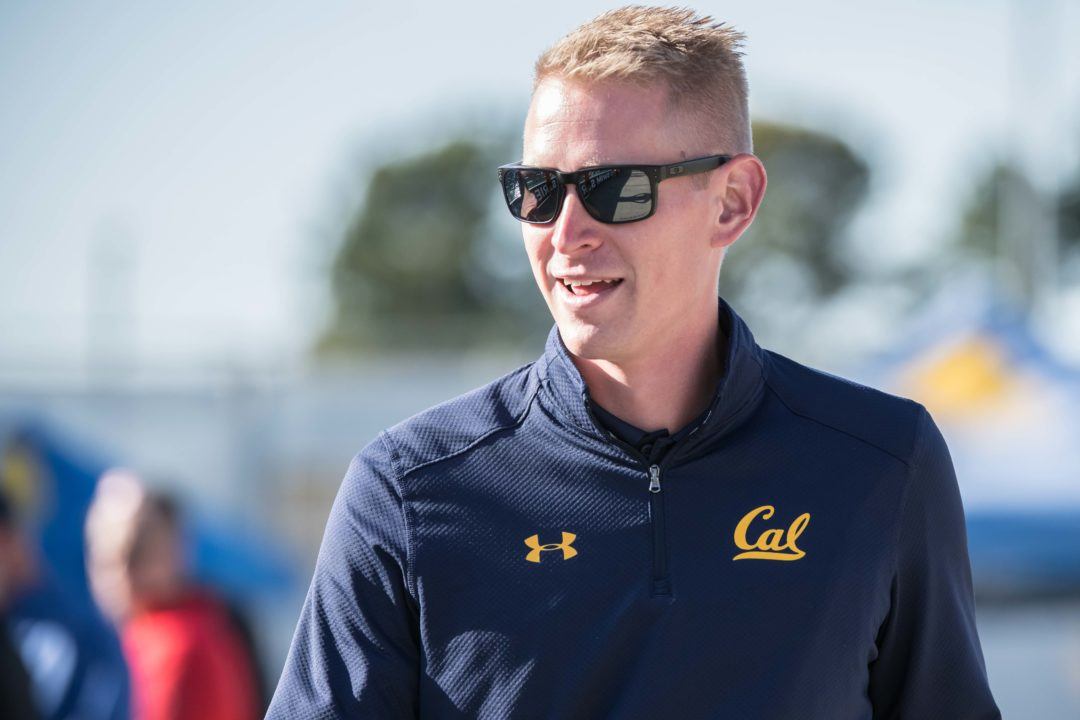 Chase Kreitler has been the new guy at a lot of swimming programs. Currently, he’s at the University of California, Berkeley, but he has been on staff at several college campuses, including California State University, Bakersfield, Eastern Michigan University, LSU, Texas, and a brief stint at Stanford. Current photo via Mike Lewis/Ola Vista Photography

Chase Kreitler has been the new guy at a lot of swimming programs.

Currently, he’s at the University of California, Berkeley, but he has been on staff at several college campuses, including California State University, Bakersfield, Eastern Michigan University, LSU, Texas, and a brief stint at Stanford.

Of his bubbly positivity and his success in coaching, Kreitler thinks it might be a chicken-and-egg situation.

“I’m not sure if it’s because I’ve coached at five or six programs or I just care about people and want them to thrive and spend time getting to know them,” he said. “Maybe a little bit of both?”

Kreitler explained that freshmen are made to feel especially welcome at Cal, starting from move-in day. Teammates help the freshmen move into the dorms, and then at the end of the day, there’s a reception for the new students and their families at the Legends Aquatic Center.

During the event, a sophomore reads a letter to the new freshman class that’s meant “to give them helpful information as they’re moving into their freshman year and also lay out what to expect or some things they learned throughout their freshman year that they think will be helpful for the incoming freshmen,” Kreitler said.

“That’s something that the program’s been doing for a few years now,” he added. “Who better to hear from than someone who just finished their freshman year?”

For these new student-athletes to hit the ground running, it’s important to stay organized using a planner or calendar app, Kreitler said. Reviewing each professor’s syllabus for the semester and thinking three to four weeks ahead of time will give them a better sense of what’s coming down the pipeline.

“They can look at the big picture of: What does the month of September look like? When do I have exams? When do I need to buckle down and study? When can I loosen up a little bit?” he said. “Having that 30,000-foot view really helps them manage their energy.”

Another tip for freshmen is to learn when to say no. There’s so much they’re invited to do during the first few weeks that it might be tempting to sign up for every club and activity.

“I think sometimes good things can get in the way of great things,” Kreitler said.

But before the extracurricular opportunities can factor in, of course, there are classes to attend.

If college freshmen are still enjoying swimming toward the end of September or beginning of October, they’re on the right track. The dual meets are a big part of what makes college swimming special and can build additional team camaraderie.

“Setting little goals for people along the way is definitely part of that, so they can stay engaged through the process,” Kreitler said of the long months. “Our guys do a good job of that. When it gets tough, they keep pushing.”

Kreitler also encourages and expects questions from his squad during practices — he designs them so that everything has a purpose.

“It’s always tied to making them better in a certain way, whether it’s hitting a certain energy system or working on a specific technical skill,” he said.

Cal is also known for its robust pro group, which can also serve as inspiration for the incoming class. They all train at the time same and can often have overlapping sessions in the weight room.

The swimmer “just has to be better for himself,” Kreitler said. “We talk about using that group environment to your advantage. Maybe a freshman comes in and they’re a great kicker — go ahead and challenge the best people on the team. You don’t need to be timid with that.”

In the weight room, though, it’s important that freshmen pace themselves. Safety has to be the priority, Kreitler said, even when swimmers might see the upperclassmen or the pro group really going after it.

“Tom Shields talks about his freshman year — he went through a really slow process in the weight room of just working on flexibility and working on doing the movements correctly first and then adding weight,” Kreitler recalled. “It was a period of several months, three or four months, before he started to put a little bit more weight on the bar and that sort of thing for some of the different exercises.”

It’s OK if freshmen feel like small fish in a big pond when they arrive on campus, even if they were the star or favorite at a club level. Especially with the pro group and Olympians on Cal’s campus, they know there will be faster swimmers. But they’re able to build confidence, because swimming is objective, and of course, Kreitler said, “it’s also really fun to be part of a team that’s fast.”

Finally, it’s important to remember that the coach’s door is always open, Kreitler said. He’s a people person, and he reiterated that swimming is about relationships. He said that while college might sometimes exist in a bubble, it doesn’t always happen in a vacuum.

“I just let the guys know that they can always talk to me about anything,” he said. “Because sometimes you have stuff going on outside of the pool that’s out of left field, that you don’t expect, that can be really hard, whether it’s a breakup with a girlfriend or having something serious like cancer or a grandparent passing away. We’re here for you. We don’t just care about you because you’re a swimmer — we care about you holistically, and we want you to thrive in life.”

Learn the names of your teammates’ siblings.
Memorize their hometowns & high school names.
If you care to know a little bit about your teammates they will never forget that you cared.

Chase Kreitler is fantastic, and makes everyone he meets day a little better. Having him on your deck makes your program better.

How can anybody down-vote this?

Remember that you are a STUDENT-athlete and not a student-ATHLETE. Get to know your instructors. Some will care deeply for you while others may view you just as an ID number (get to know those people!). Participate in classroom discussions. Turn in your assignments when they are do, if not earlier. Get to know your adviser. If you’re struggling in the classroom get help. Use your school’s tutoring service.

At Cal, your academic classmates will be some very bright (and motivated) students.

But they are Olympian as far as their study and test-taking skills. Expect the classroom to be as competitive as the swimming pool.