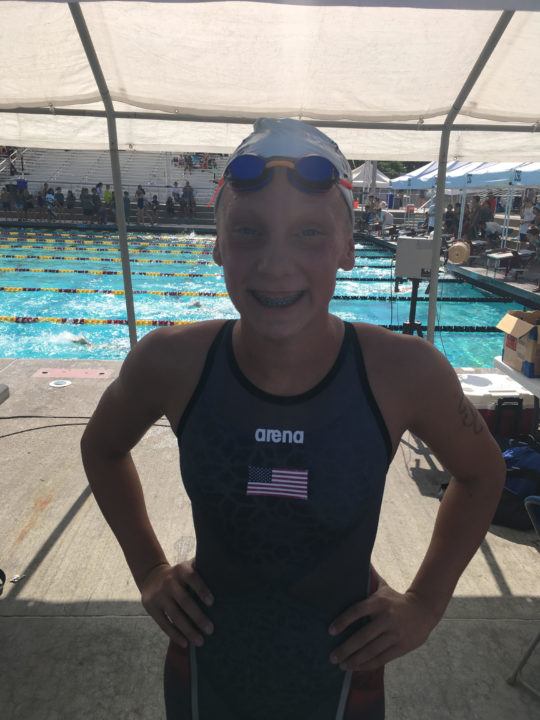 Flood Aquatics wrapped up their week-long intrasquad meet with the 6th day of competition, consisting mainly of athletes swimming duals in their off events.

Claire Tuggle, age group phenom, continues to get faster and faster. Having just turned 13 in mid-July, Tuggle posted a very fast time of 56.74 to take 2nd tonight at NCSAs in the 100m free. That time is well ahead of her prelims time of 57.40 and her previous PR of 58.24. She now ranks 19th on the all-time top performers list for the 13-14 age group, just .01 behind Sippy Woodhead.

Tuggle’s other individual swim tonight was the 800 free, where she won the event by almost three seconds over NCAP’s Chase Travis. Tuggle posted an 8:43.57 after going out in a 4:22.96, effectively negative splitting by over two seconds while breaking her PR (set earlier this month) by over 15 seconds. Travis touched at 8:46.33, just off her PR from Nationals.

In the 200 back, meet records went down on both the boys’ and girls’ sides. Bryce Mefford of the Sierra Marlins posted a 1:59.75 to win the race easily, breaking Robert Owen’s 1:59.84 mark from 2013. For the girls, Suburban Seahawks’ Alex Sumner had a PR 2:09.84 to break her own meet record and touch below 2:10 for the first time. Both swimmers have announced their commitments to swim for the Cal Golden Bears.

Dayton Raiders’ Cody Bybee worked his way to three wins tonight, two on relays and one individually. In the 50 fly, he swam a 24.60 for the victory, while leading off the Raiders’ meet record 1st place 200 free relay (23.23) and swimming a 23.95 fly leg on their 1st place 200 medley relay.

Most impressively, she had just won the final of the 800 free about 10ish minutes before.

Great double for her.
She would have broken 56 without the 800 free.
You need to be fresh to perform on sprint.
Until Caeleb Dressel proved the opposite. 🙂
But I don’t buy the idea that swimming 800 meters a few minutes before your 100 free helps you to maximize your chances in the sprint event. 🙂 You can’t be at the same time a distance swimmer and a sprinter. It will be interesting to see in the future if she becomes more a 100 free/200 free swimmer or more a 200 free/400 free/800 free/1500 free swimmer or more an IM swimmer. Too early for her to specialize. Swimming must remain a game at that age. Even at all ages.

Now let’s see her 200 free today. The week she swam her 200 free PB of 2.02.21 in late June, she was in 59.06 in the 100 free. 56.74 this week. After swimming the 800 free. So if swimming is logical….
If she breaks the 2-minute barrier then I promise to post another Bieber song on swimswam. Remember US nationals 2014 when I promised that if KL broke Pellegrini’s 400 free world record! 🙂
https://swimswam.com/2014-us-national-championships-day-3-finals-live-results/
People know I’m a big fan of Bieber and of all that terrible modern marketing “music” for defenceless teens. 😆

Too bad that only the videos’ links appear today tn the comments. I believe that until 2015 when I posted youtube links, the video was embed. We could watch immediately the video without clicking on a link and leaving swimswam for youtube. It was funnier and also more practical. We could directly watch the race videos on swimswam. We could watch Bieber’s face on swimswam! If swimswam could go back to that it would be a great idea.

appear now in the comments