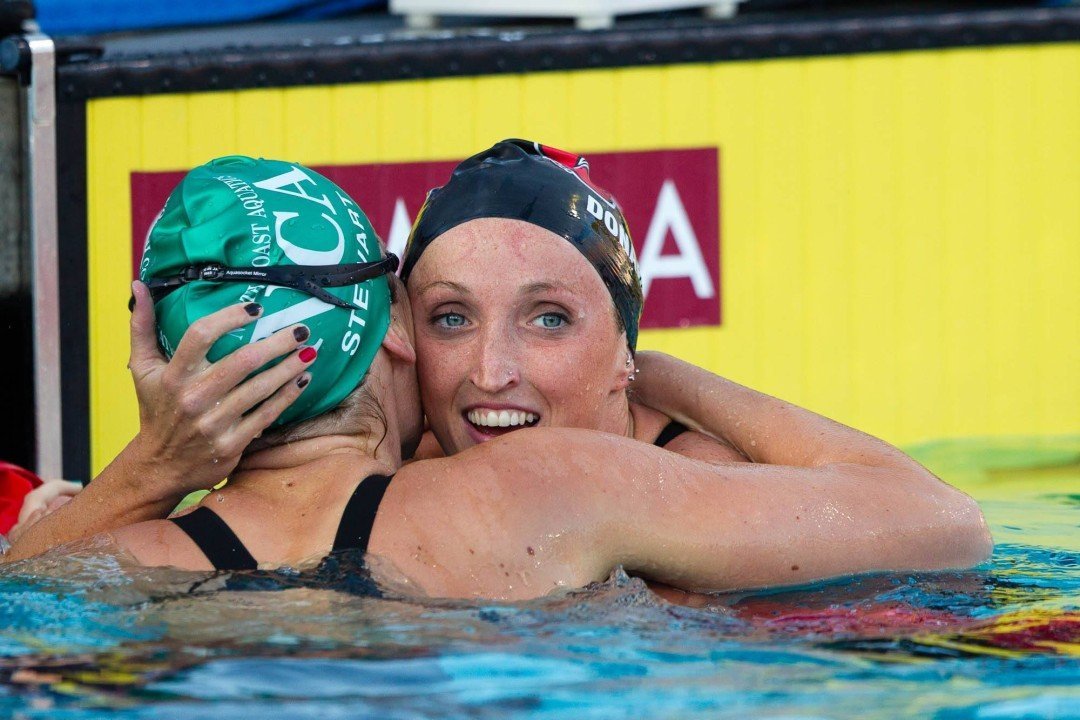 "I really am looking forward to it. I want to go. There are no doubts in my mind." - Claire Donahue Current photo via Tim Binning/TheSwimPictures.com

2012 US Olympic Gold Medalist, Claire Donahue, and former Western Kentucky head coach, Bruce Marchionda, have found a new home in South Florida Aquatic Club (SOFLO). Donahue made the US Olympic team in the 100 butterfly at the London Olympics and won a Gold Medal as a member of the 4×100 medley relay. Both Donahue and Marchionda are expected to join the team in August after the 2015 FINA World Championships.

The Western Kentucky Swim Team was suspended for five years after a Title IX investigation into allegations by multiple former swimmers that the team partook in hazing and that the coaching staff knew about it and did nothing to intervene. Although the team was suspended and all of the staff was terminated as of June 30th, Donahue described in an interview with SwimSwam that the WKU athletic department was supportive of her staying and training and would actually allow Marchionda to remain on the premises to coach Donahue and any other postgrads. Without the WKU head position, however, Marchionda would be coaching Donahue without a standard salary, making the proposition not financially possible.

Chris Anderson has been the head coach of SOFLO since 2010 and has an impressive group of Olympians training under him. Currently, he coaches Jamaican Olympian and World Record Holder Alia Atkinson and Colombian Olympian Carolina Colorado. He also has two other national record holders from the same countries; Jorge Murillo, COL, and Timothy Wynter, JAM.

Donahue and Marchionda have been visiting and training with SOFLO for years. Recently, Donahue spent some time training at SOFLO in March. Below is a quote from Sharon Robb’s blog post to the SOFLO team website:

“It was so much fun, the atmosphere was great,” Donahue said. “It’s not just about having the high level of training partners to train and push you but their goal is the same as mine. I really enjoyed the practices. I really am looking forward to it. I want to go. There are no doubts in my mind. The training atmosphere is what I was looking for. It is a pro group. I am 26 and being able to train with pros is another thing that is going to help me improve in the next year.”

Marchionda will join the SOFLO staff at the end of August, but will be coaching Donahue in Kentucky through the world championships and first two legs of the FINA World Cup, Aug. 11-12 in Moscow and Aug. 15-16 in Paris. Anderson will also serve as a Donahue’s coach at those events, but will not start running her workouts until she officially moves. In August, she will continue training under both coaches at SOFLO. Marchionda’s last day officially working for Western Kentucky is June 30th.

“It’s going to be a great experience for SOFLO, taking our coaching staff and athletes to an even higher level,” Anderson said. “It brings us up another notch to have someone who is ranked among the top swimmers in three events. Claire and Bruce bring that professionalism and competitiveness on a daily basis. There’s no transition needed, it’s full speed ahead.”

I think this could be very positive for her. A better training enviroment with a coach and training that works for her in the run up to an Olympic year.

SOFLO has a great team and these two will be a great addition to the staff. Unfortunately, the pool is pretty crappy.

Sharon, the pool leaves a lot to be desired. However, that has nothing to do with the coaching staff and swimmers, which are second to none.