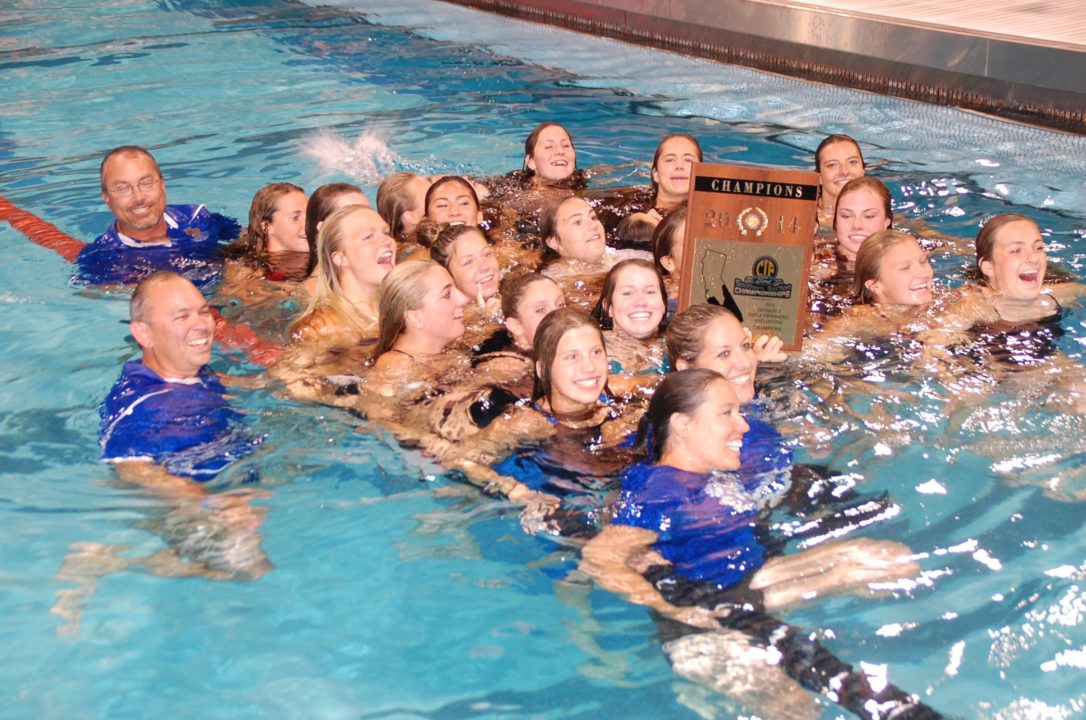 What a privilege it is to be able to watch the fastest high school swimming performance ever. Four times in one meet. That’s just what the fans at Riverside Aquatics Complex were treated to on Saturday, May 17 at the California Interscholastic Federation-Southern Section Division 1 championships.

Up next was the first act of the Katie-Abbey Show. McLaughlin of Santa Margarita had set the D1 record last year (while at JSerra) in the 200 free going 1:45.39. This year she dropped another second to rewrite the CIF books with 1:44.66. McLaughlin took it out quickly, hitting the first 50 at 24.71. Daniela Georges of Woodbridge and Foothill’s Rachel Thompson weren’t all that far back, with 25-lows. The three continued in the same formation at the 100, after which Thompson fell off pace. Georges did a pretty good job keeping McLaughlin in her sights, touching in 1:45.89 for second place. Thompson was third, a second ahead of Capo Valley senior Brooke Lorentzen.

The 200 IM will be an interesting event to watch in coming years as most of the top finishers were freshmen. Nikol Popov of Valencia put forward a very strong performance in finals, having finished third in prelims. JSerra freshman Glavinovich was in the lead after the backstroke, but just barely. Nora Deleske, a freshman from Edison, outsplit the entire field on the breast and moved in front of Glavinovich, while Popov’s breast was enough to put her in the lead overall. The Valencia freshman came home nearly a second faster than runner-up Vose of Sacred Heart, getting the win in 1:59.90. Deleske was third with 2:01.44, just .13 ahead of Glavinovich.

Act Two of the Katie-Abbey Show involved a start, a turn, a finish, and a ROAR from the crowd as Weitzeil of Saugus hit the wall in 21.98. The only other time a (female) high school swimmer has been under 22 seconds was in 2012 when Olivia Smoliga set the National Public School record with 21.99. JSerra’s Albertoli went 22.84 for second, while Alemany’s Katherine Wagner (23.07) got third.

Capo Valley and Mission Viejo each picked up quite a lot of team points in the diving. Capo freshman Camryn Hidaldo won the D1 title with 536.40 points; Mission’s Alexandra Caplan (a senior who will dive at San Diego State next year) finished second with 523.80, and San Clemente sophomore Haley Farnsworth (522.35) was third.

Back from the break it was McLaughlin’s turn to break a national record in Act Three of the show. With four laps of strong kicking and three great walls, the Santa Margarita junior finished the 100 fly and looked at the scoreboard to see 51.78. McLaughlin had just broken Kathleen Hersey’s Independent School record from 2008 by 66/100. Hart’s Tamara Santoyo took second (53.75). UCLA commit Anna Quinn of Thousand Oaks (54.34) was third.

Georges and Lorentzen in the 500. Photo: Anne Lepesant

Weitzeil of Saugus followed that up with another National High School record, this time 47.91 for the 100 free. And that is the fastest 100 free ever swum in a high school meet. The Public School record had been 48.33, set by Dagny Knutson in 2008, and the Independent School record is Missy Franklin’s 48.39 from 2010. Second place went to JSerra’s Albertoli (49.90), while Foothill’s Thompson was third (50.49).

In the 500 it was pretty much only a two-person race by the 200. Georges of Woodbridge was up by about a half-second over Capo Valley senior Lorentzen and no one else was challenging them. Georges had increased her lead to 1.3 seconds by the 250, and although Lorentzen had a stronger second half she couldn’t close the gap. Georges finished first in 4:45.94 while Lorentzen finished her high school career with a 4:46.85, good for second place. Megan Popp of Corona del Mar took third.

For the second year in a row, sophomore Courtney Mykkanen of Foothill was crowned champion in the 100 back. This year she won in 55.12 over Ventura junior Solie Laughlin (55.29) and Mater Dei sophomore Aislinn Light (55.93).

The fifth and final act of the Katie-Abbey show came when Weitzeil led off Saugus’s 400 free relay in the consolation final with a new National High School record of 47.82, lowering her new mark by another .09.