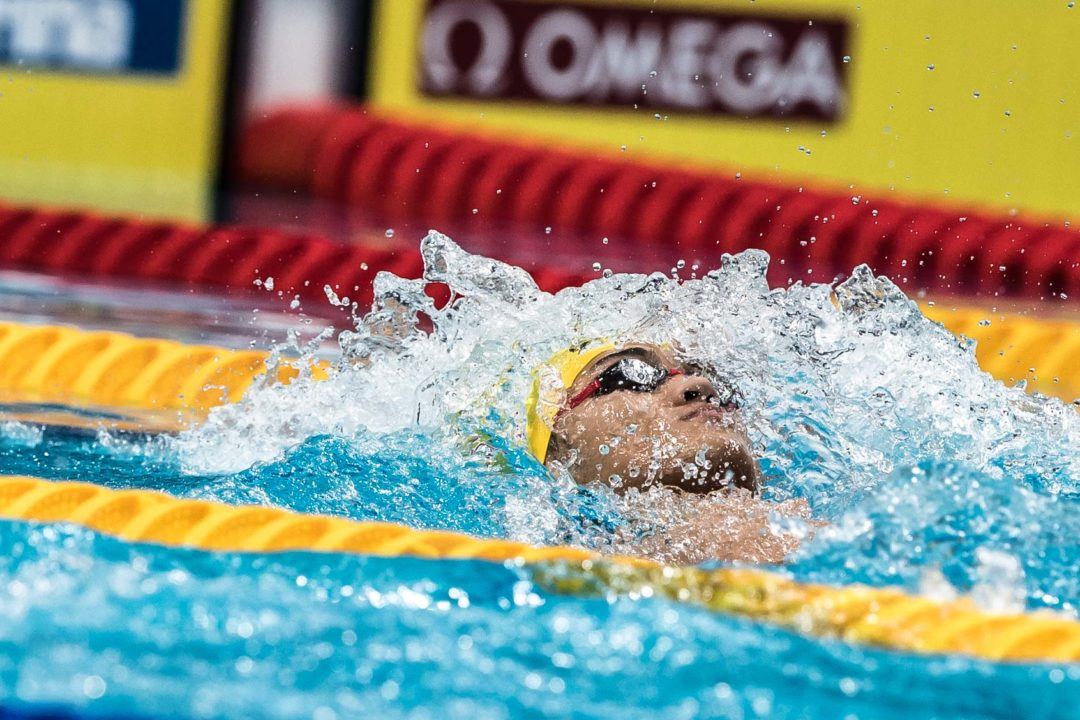 While swimmers around the world are slowly permitted to re-enter the water with the careful peeling back of coronavirus pandemic-related restrictions, we’re getting a feel for the baseline from which these athletes will begin their Olympic journey.

News out of China is that several members of its national team held an unofficial ‘practice meet’, with some key times thrown down by the likes of record holders Xu Jiayu and Yan Zibei to as initial firing shots to their international competitors.

Per the Weibo account of CCTV reporter Sun Xue, and backed up by news source SINA, 24-year-old Xu busted out a 52.37 100m backstroke scorcher in the domestic affair. Although splits were not made available by the reporter, the 52.37 time by Xu checks-in only .06 outside his result of 52.31 that garnered him the silver medal in Rio at the 2016 Summer Olympic Games.

Comparing his 52.37 to a more recent outing, the mark would have surpassed what he produced for gold last year in Gwangju, which was a speedy 52.43. The 52.37 from Xu sits just outside the top 25 performances all-time worldwide and checks-in as his own 4th best performance ever.

The time also represents Xu’s lifetime best outside of a championships meet.

Below are Xu’s top performances ever:

Moving on to the men’s 100m breast, Yan reportedly hit the wall in a time of 59.50 to grab his first sub-minute result of this pandemic era. Yan earned bronze in Gwangju at last year’s FINA World Aquatic Championships, notching a new national and Asian record of 58.63 in the process.

His teammate Sun Jiajun clocked 52.27 in the men’s 100m fly at this domestic time trial-type competition, while Yang Junxuan grabbed a time of 1:55.06 in the women’s 200m free.

Yang owns the Chinese national record with her outing of 1:54.98 logged just this past January during the Beijing stop of the FINA Champions Series. Her outing here fell just .08 outside of that result, which bodes well for the 18-year-old Olympic hopeful.

Finally, the Weibo update says that Xu Yiayu, Yan Zibei, Zhang Yufei, and Yang Junxuan posted a collective mixed medley relay time of 3:40.26. Splits are unknown, but this time unofficially would outperform the Chinese national record of 3:40.45 punched at the 2018 Asian Games.

I still don’t understand how this perspective adds any more validity to the claim that this is near his lifetime best. The difference between being .50 and .01 from the world record is massive for this level of athlete.

For presumably not training as often as he would’ve had there been no global pandemic, a couple tenths off of the times he posts at taper meets is seriously impressive

Both can be true…it is impressive all things considered and the tittle is also a bit misleading. not really near a lifetime best

same here ,,,finally a breather in this situation

Eddie Reese smiling to himself and remembering when he said the best taper might be just a couple of weeks completely out of the water.

I doubt Chinese national team members were ever fully out of the water.

47
-4
Reply
remel can do anything
Reply to  Riccardo

You think.
Your probably correct.
They believe in resilience