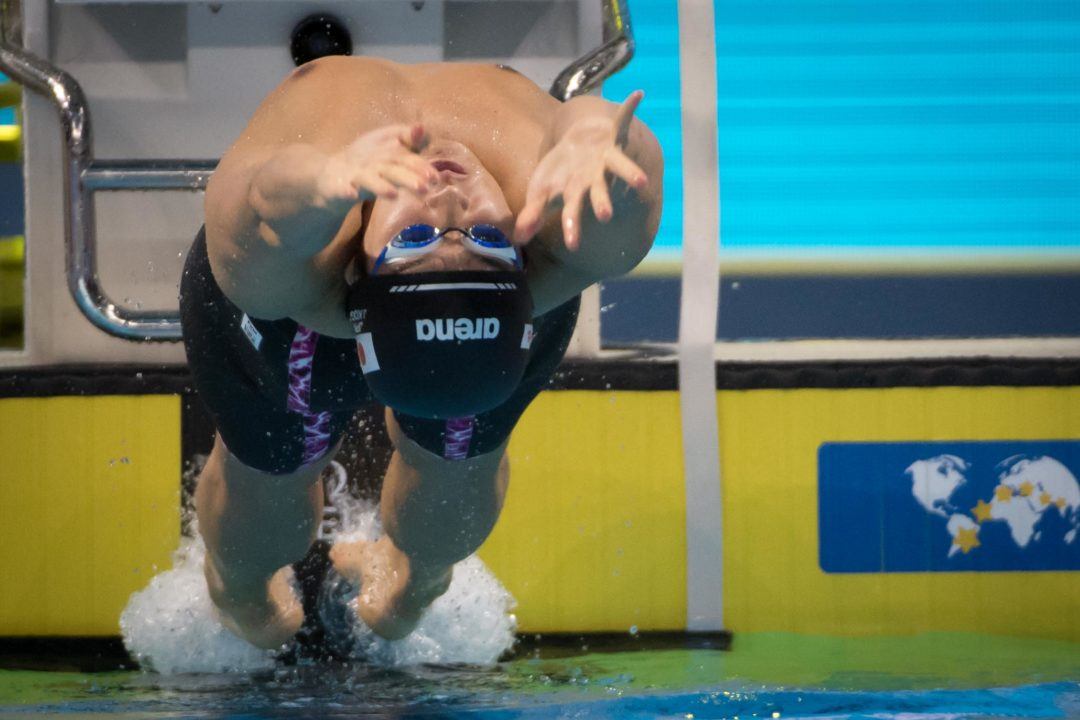 Junya Koga has said he is facing the challenge head-on, capitalizing on the extra time he, and other athletes in his scenario, have been gifted. Archive photo via Mike Lewis/Ola Vista Photography

Shortly after the announcement that the 2020 Olympic Games were being postponed to 2021, we published a list of swimmers who may especially benefit from the extra year of preparation. The swimmers were selected for various reasons, spanning from injury rehabilitation to the expiration of a current suspension from competition.

Falling into the latter category was Japan’s Junya Koga, the Japanese Olympian who was serving a ban after having tested positive for Ligandrol in March of 2018.

The 32-year-old’s original 4-year ban was reduced down to 2 years due to the Court of Arbitration for Sport (CAS) concluding that contamination of supplements unknowingly ingested by Koga was most likely the cause for his positive test. Even that reduction still would have rendered the backstroking ace out of the 2020 Olympic Games, as his suspension would have ended after his nation’s Olympic Trials.

Given the new situation, however, with the Olympic Games now taking place in 2021 and the Japanese Olympic Trials rescheduled for April, Koga has new swimming life.

With the ban off his shoulders, Koga told Asian media this week that he has a personal mission to establish a new World Record in his best non-Olympic event of the 50m backstroke.

The 100m backstroke Olympic event will prove to be a more difficult path for the veteran, however. Domestically, another seasoned athlete in Ryosuke Irie maintains a stronghold on the event, carrying a season-best time of 52.59 to top the world rankings.

Even with the Japanese men’s 100m backstroke field being rather light behind Irie, Koga will need to obtain a time of 53.40 in addition to touching in the top 2 at next year’s Japan Swim to qualify for a home-hosted Games.

Taking a look at Koga’s 100m back history, the man hit a time of 53.57 at the 2016 Japanese Olympic Trials for 3rd place. A month later that same year he posted a time of 54.83 for bronze once again at the Japan Open.

The following year, Koga missed the men’s 100m backstroke final entirely at the Japan Swim, that year’s World Championships-qualifier. 2018 is when his ban started and his ability to train/how he has been training is unknown at this point.

As such, Koga most likely has a tough road ahead of him. But, rather than retire, Koga has said he is facing the challenge head-on, capitalizing on the extra time he, and other athletes in his scenario, have been gifted.

Best backstroke start in the sport

Time to get the gold Junya! Greatest Backstroker of ALL TIME!