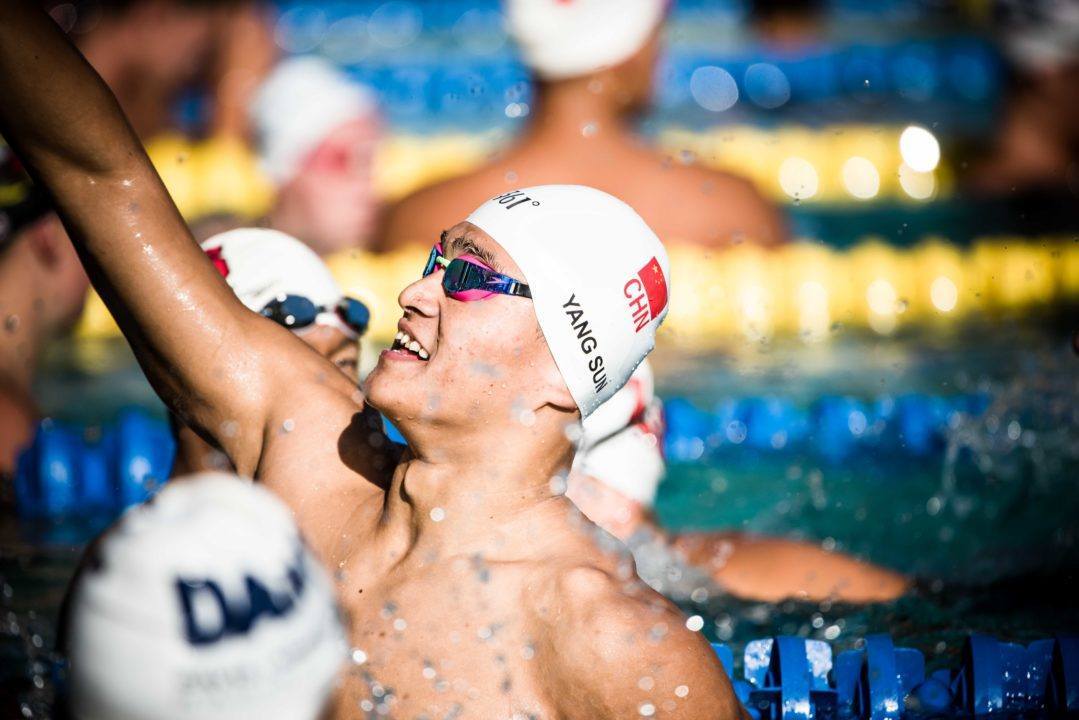 The roster includes most of the other really notable Chinese swimmers. Sun Yang will swim the 200, 400 and 1500 frees. Ning Zetao is entered in the 50 and 100 frees. And in what is only somewhat a surprise, 2012 Olympic champ and world record-holder Ye Shiwen will contest both the 200 IM and 400 IM – she appeared to be on the outs in the 400 after a rough swim at Chinese Nationals, owing to what was rumored to be a stomach illness.

The most glaring absences are Wang and Qiu, both 18-and-unders:

Wang’s absence is a bit more explainable. The 17-year-old set the junior world record in the boys 100 breaststroke earlier this year, but also tested positive for clenbuterol, a banned substance. Originally, it appeared Wang would only face a monetary fine as punishment, but there was always a chance he would be left off of China’s Olympic roster as well.

He ranked 9th in the world with a 59.60 in the 100 breast this year, and had an outside chance to medal. He’s also considerably faster than the next-best candidate for the breaststroke leg on China’s medley relay.

She had been even better this year, going 1:55.84 at Chinese Nationals in April and holding the 8th-best time in the world.

Qiu’s absence is a considerable blow to the Chinese 4×200 free relay, which will now need some huge swims to challenge the American relay for gold, and may have to scrape just to get back onto the medal podium.

To the best of my knowledge, China never released the names of 3 out of the 6 swimmers who failed drug tests (after being exposed by the New York Times).

Call me cynical, but I believe the ultimate team selection had a lot to do with who could credibly pass a drug screen by August.

The identities of those three athletes are widely known in the Chinese swimming community. They were banned from the spring selection meet and they are not on the current team although at least two of them have A qualifying time.

If only the chinese administration were more transparent, then may be the world can trust them more, but alas…

FINA has not made their decision regarding Wang and his two comrades who were only given warning by the Chinese Federation. In April FINA said that it was “reviewing the cases”.
Now that mcLaren report is out, FINA will definitely try to look tough against doping and may impose tougher punishment by taking the case to CAS.
So I think Wang Lizhuo is left out because China doesn’t want to risk losing Wang at the last minute.

Not surprised at all to see Shiwen in womens 400 IM and Yang in mens 1500 free, although many people didnt want to believe it. The question is: Do they swim those events, because they really think that they can win them or did the chinese officials pressure them to swim those events?
Huge blow for the chinese mens medley relay and the chinese womens 800 free relay. I think their womens relay will still take the silver medal ahead of Australia, but the fight for the bronze in mens medley relay might now be open, USA and Australia should win gold and silver.
I think the bronze in mens medley relay will be between Russia, Japan and maybe GB.

I would put JPN out and Brazil in.. But China is still in as their 2nd breaststroker is 59,9

Brazil wont win anything with 3:35.5 …
I think Germany is at 3:33.51 (Glania 53.61, Vom Lehn 59.87, Deibler 51.49, Wierling 48.54). Glania and Wierling should drop time by Rio, but Vom Lehn and Deibler might be slower in Rio. I think if everything works perfectly for us in the next couple of weeks, then we could be at 3:32.6 – 3:32.8 by Rio and i dont think that GB, Brazil, Japan or Italy will be much faster, but Russia should be out of reach and they clearly have a more “balanced” relay than Italy, GB or Brazil. I think bronze will be between China and Russia.

For Italy I used toniato time

Losing Qiu Yuhan is a bigger blow for China than losing Wang.
With Yuhan, they may challenge USA in 4×200, but now they will have to worry about securing silver.

Their mens medley relay might end up without a medal now, especially Wang very well couldve dropped time until Rio considering his age. Their womens 800 free relay is still safe to win a medal and they never had a chance to challenge the US (at least in my opinion).

Who do they have to worry about, they’re still a very secure bet for silver. Every other team outside USA & CHN fall away to 1.57high/1.58 for their 3rd/4th legs. They may as well send out a search party to find a bronze medallist !!

They actually have a lot to worry about. With Qui Yuhan on the team they were 1.5s ahead of Australia on season bests. Without her they are behind Australia. If Louise Hansson can get down to the times she did last year then China wouldn´t be far ahead of Sweden either (that is a big if, considering how Louise´s swimming have looked this season, but there´s been some promising signs lately so it´s certainly not impossible).

Just a hunch: Ai Yanhan will be the dark horse of women’s 200 free.

According to Chinese media, Ai Yanhan’s DOB is February 7th, 2002.

Krisztina Egerszegi and Kyoko Iwasaki both won golds at 14.

How much of the Chinese selection process is political and coaches (recognition) driven?

Seems a lot. Rumors say Qiu is likely a sacrifice. But we are still waiting for some more news.

A sacrifice for what? please tell us more..

Any idea when FINA will announce the entire list of participants?

Shen and fu should be switched for the Medley relay.

Ye will somehow get into the final like always.. She could challenge for a medal again if she’s “back to normal.”

With Wang out now the medley relay shape is much different..

China was pretty ahead of the rest of contenders for Third Place.. now that difference has dropped a lot.. if not nulified..

7
-2
Reply
He Gets It Done Again
Reply to  Rafael