Chasing The Perfect Race: Can a UNC Professor Solve the Championship Swimming Puzzle? 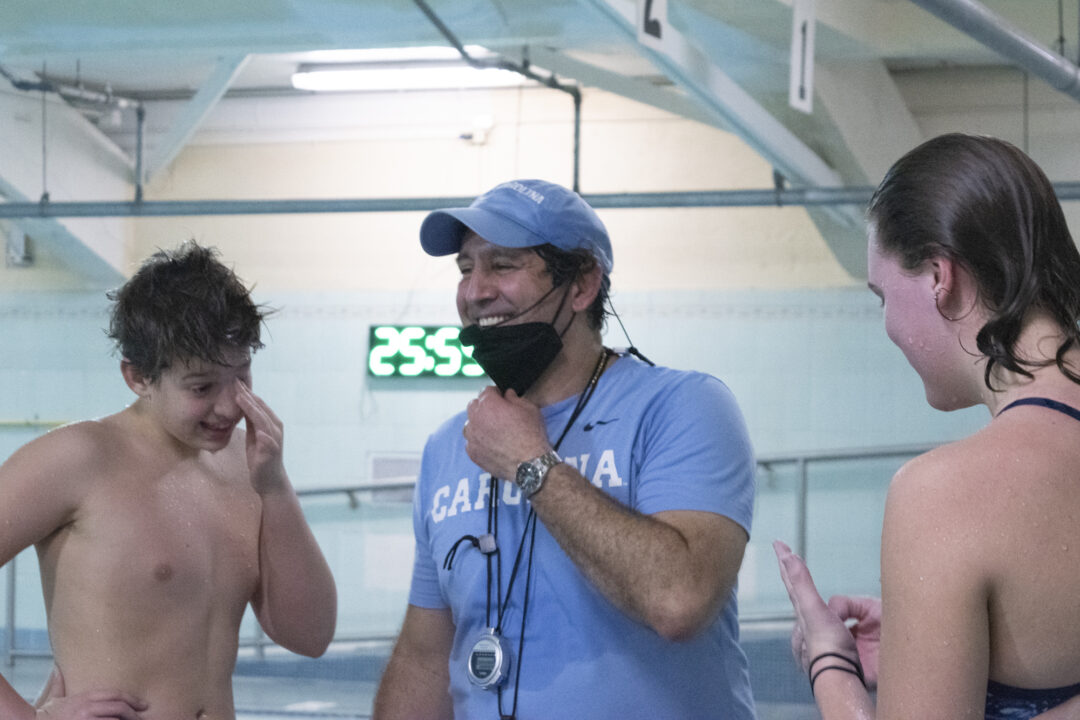 Claudio Battaglini applies his physiology expertise to train some of the best swimmers in North Carolina while also working on cancer research. Current photo via Ellie Crowther-Dias

Holding a stopwatch, Claudio Battaglini fixes his eyes on the swimmers. He paces the length of Bowman Gray Memorial Pool alongside them. In the chlorinated humidity, sweat and pool splashes dampen his shirt.

He shouts into his microphone headset:

Battaglini doesn’t do it for the money — he’s a volunteer coach. He has a higher goal: He wants to see what the human mind and body can do,

A former elite soccer player, Battaglini turned to the study of physiology so he could understand exactly what was going on in the body and how to optimize training. Later, his academic research led him to groundbreaking work on the impact of exercise on cancer.

Now he is bringing together all that he has learned – biomechanics, psychology, nutrition and training – to coach swimmers into world champions.

He is in pursuit of the perfect race. The perfect swim.

“It’s a complex process, no question,” Battaglini said. “And because it’s complex, that’s what excites me, to make sure that all the little pieces of the puzzle come together in a way that we can be successful.”

His philosophy, in the pool and in the gym, departs from conventional wisdom.

And it seems to be working.

Battaglini grew up in Brasilia, the capital of Brazil, where he played a bit of every sport.

Soccer was his best. As a teenager he won state championships and played in the Brazilian junior national championships. He had the opportunity to play professionally (every young Brazilian’s dream, he said) but turned it down for school.

He studied exercise and sports science for his undergraduate degree and got an internship with a swimming academy. That’s where he first learned about how swimmers move through water. He stayed for years, through his college graduation. Then Battaglini was recruited to start a triathlon team which produced no fewer than six national champions.

At the advice of a former college professor, Battaglini went back to school to acquire scientific knowledge that he could apply to his coaching.

He went to the University of Northern Colorado. When his mentor was diagnosed with cancer, others in the department asked him to study the effects of exercise on cancer. He was a student founder of the “cancer gym.”

His first patient was a 23-year-old woman with a brain tumor who was told she had four more months to live. She lived for two and a half years after they started working together, but then took a month break from exercising. The tumor returned and she died.

Battaglini says he was heartbroken. He wanted out of cancer research at that point, but his mentor convinced him to keep going. So he stopped working in sports and has dedicated his career to cancer research for more than 20 years.

At UNC, Battaglini co-founded Get REAL and HEEL in 2006, a program that develops exercise programs for cancer patients. He directed the program until this past year, when he let UNC’s Lineberger Comprehensive Cancer Center administer the free program and he transitioned to the director of research and a Director Emeritus.

His hypothesis is that exercise can help alleviate the side effects of cancer treatment.

“I believe that exercise can help these patients live better,” he said, “and by living better, living a healthier lifestyle, they might end up having a better long-term prognosis.”

Battaglini had given up coaching. But when he saw how talented his son, Lucca, was in swimming at age 6 he couldn’t resist returning to training and coaching.

Today Battaglni, 49, coaches Lucca and 11 other swimmers . As of January 2022 they form the Chapel Hill site of East Carolina Aquatics, a club based in Greenville, N.C.

It started with just Lucca Battaglini and his dad.

As a six-year-old, Lucca Battaglini swam neighborhood summer league. During his first meet, he broke records in every event he swam.

Lucca Battaglini tried out different year-round club teams. For a time he swam half the week with a club and the other half with his dad. One of Lucca Battaglini’s friends, U.S. National Deaf Swimming Team member Collin Davis, joined that schedule in 2019.

Lucca Battaglini left club teams to train full time with his dad in 2020. Davis and others followed.

Among them are Lily Willis, a 15-year-old specializing in breaststroke and individual medley who’s top in the country, Tate Bacon, a Notre Dame recruit, and Sam Stewart, a three-time U.S. National Team member and two-time Olympic Trials finalist. Four are former Varsity swimmers. The youngest Battaglini, 13-year-old Vincent, swims with them. Battaglini calls him the team mascot.

Zhada Fields was UNC Varsity captain her senior year and graduated in 2019. She qualified for Olympic Trials in the 50 freestyle in 2019 and continues to train with hopes of qualifying again for the 2024 Olympics. She believes Battaglini is the coach to get her there.

“He’s seen and worked with the best athletes in the world,” she said, “and that’s his aim every time.”

He’s an intense person, like Fields, but that’s not what sets him apart. His training is different.

Battaglini uses a periodization plan, designing three phases leading into the season’s big meet: aerobic, pre-competitive and competitive. The focus and yardage shift with each phase.

When pools shut down at the start of the pandemic, they put on wetsuits and trained in Jordan Lake. Battaglini bought a kayak so he could be in the water with them.

Battaglini said when he was an athlete, he always pursued the latest technology and training methodology. He does the same with his athletes.

He dons a microphone headset — an underwater communication system — so he can correct their stroke in real time. The swimmers hook miniature speakers over their ears that hang just below their goggle straps.

When someone’s arm strays out of proper form, everyone hears about it. Battaglini chats with someone on the pool deck, and they’re all listening in. During long swims, he might play music. During a sprint set: “Pick it up!”

“I constantly study my athletes,” he said. “I’m constantly trying to get feedback on how they feel, so I can modify some of the training parameters to try to maximize their ability to improve.”

And that’s not without stiff competition. North Carolina is a prominent swimming state, with 11,000 swimmers registered with USA Swimming and more than 100 qualifying for the most recent Olympic Trials.

Lucca Battaglini wants to go to the Olympics and win a gold medal (“preferably a couple”), a goal of his since he was 8.

His genetic ability is there, but Battaglini says that’s only the start of success. A champion is made, he said, when you put hard work on top of talent. Passion and luck help, too.

This season, the swimmers are training for the Phillips 66 National Championships. Lucca Battaglini’s and Bacon’s goal is to make USA Swimming’s National Junior Team, a group of 18-and-unders who are the fastest in the country. If he makes it, he will compete at an international competition for USA Swimming.

And Battaglini will be beside him the whole time. He doesn’t do it for money or recognition. He does it to be with his kids, to help those athletes become the best.

“It’s addicting to me,” Battaglini said. “When I see them doing well, it’s such a great feeling. It’s almost like you’ve swum with them. I swim with them every race.”

Elizabeth Moore is a senior at the University of North Carolina at Chapel Hill studying journalism and spanish. She is from Sanford, North Carolina. Throughout her reporting career she’s covered protests over Confederate monuments, University COVID response and business. After graduation she will report for Bloomberg in Manhattan.

Great worth with cancer patients. 👏. Would just like to see him work at a better school. Nc state and Duke are much better options not too far away

Love the story and the storytelling – great job, Elizabeth Moore! You’ve got a promising career ahead…hope to see more of your writing here!

As of today there are 4 swimmers, from what I’ve heard Bacon, Davis, and two other male swimmers left the team, and Sam Stewart was only swimming with him for a couple of weeks

Really cool stuff. I would love to see more about the underwater devices.