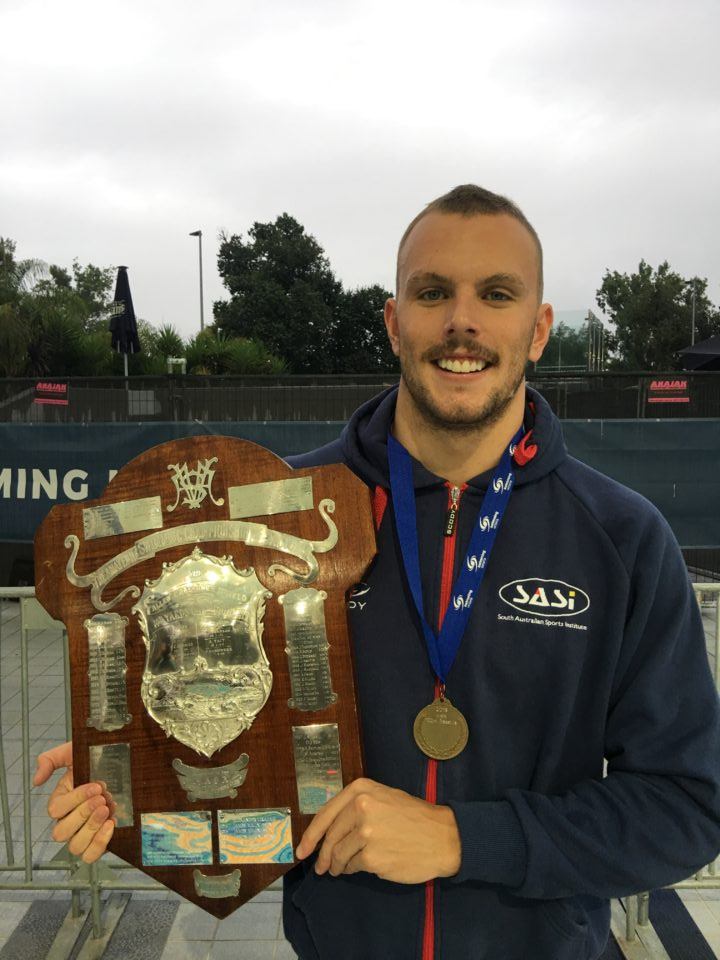 Yesterday fans were treated to a freestyle sprinting duel between Olympic champion Kyle Chalmers and his domestic rival Jack Cartwright, as both 19-year-olds competed in the men’s 100m freestyle. Chalmers earned the win yesterday, clocking 49.48 to Cartwright’s 49.77 and the 200m battle between the pair was even closer tonight.

Opening in a solid 100m split of 53.10, Cartwright, who trains alongside Olympic medalist Mitch Larkin at St. Peters Western, wasn’t able to hold off a charging Chalmers, as he closed in his signature speed to seal the win. Chalmers was much slower going out, registering a 54.31 for the first half, but scorched a 55.19 to wind up at the wall first in 1:48.29, just .04 ahead of Cartwright’s mark of 1:48.33.

For Chalmers, who is now well into a solid block of training, his time tonight registers among the top 5 fastest of his career, which has a speedy 1:46.81 checking in as his quickest ever.

Most recently, Chalmers found himself out of the final at the Queensland Championships last month, where the Marion swimmer collected a modest time of 1:51.75. The fact Chalmers now sits among the world’s top 10 200m freestylers in the world right now under, even ahead of Bond boy Cameron McEvoy, under heavy training, has got to put fans at ease the teen is almost at full recovery from last year’s heart surgery.

It was deja vu for Mitch Larkin, as the 24-year-old double gold medalist from the 2015 World Championships took on the same double tonight as he did at last month’s Queensland Championships. At that meet, Larkin scored wins across the 200m IM and 200m backstroke, notching a new personal best in the former event in an impressive 1:58.89.

Larkin wasn’t too far off that mark tonight, clocking 1:59.95 to win the men’s 200m IM race by over 3 solid seconds. With little rest between events, Larkin then registered a winning time of 1:57.70 to take the men’s 200m backstroke for the same double he clinched last month.

“I did the double in Queensland States last month and to do it  again is very satisfying; training is going really well and I’m looking forward to a good year,” said Larkin, who returned to St. Peters under new Head Coach Dean Boxall after trying out a stint under Simon Cusack at Commercial.

“It’s been a real confidence booster; I’m practicing the double because I’ll probably do it at Trials again.

“They are two of my most favourable events and it’s just unfortunate they fall on the same night but this has been good practice and good racing.

“It‘s been a positive move to Dean and also being back at St Peters Western; Dean’s a great coach; very intelligent, very full on but I’m really enjoying the swimming and the training, it really suits me well and I’m loving it,” Larkin said after the race.

Also nabbing wins tonight were Emily Seebohm and Brittany Elmslie, 2 seasoned racers who have multiple Olympic medals under their belts. Seebohm was beaten (albeit barely) by 16-year-old Kaylee McKeown in the women’s 200m backstroke last night, but the veteran was able to get the job done in the 100m distance tonight, clocking 59.45 for the gold. McKeown finished behind in 1:00.16 for silver.

For her part, Elmslie was tonight’s 50m freestyle winner, slamming the wall in 25.76 for the gold.

“We have just returned from a pretty hard training camp on the Gold Coast where we did some really hard sets and I have been pretty tired since so I came in here just to try and get my training up and do some race practice as well,” said Seebohm.

“It’s my last hit out before Trials next month and the backstroke is really tough at the moment so I just have to keep focused, come back from this and train really hard.

“There is only six weeks to go so fingers crossed we will get some nice weather; we don’t know what to expect but hopefully better than the Pan Pacs in 2014.”

Of note, we confirmed that Maddie Groves, who was expected to make her racing return post-missed-doping-tests-debacle, is not at this meet due to ‘not feeling 100%.’

Also, special shout-out to Mack Horton, yesterday’s 400m freestyle victor over Italian training partner Gregorio Paltrinieri, who competed in both open water and pool swimming today. After racing in the Lorne Pier to Pub along with Paltrinieri this morning, the 21-year-old Melbourne Vicentre swimmer represented his club at the end of tonight’s session as lead-off on their 4x200m freestyle relay. He earned a split of 1:52.84, while the foursome ultimately won the event in 7:30.06.

Really impressed with both after their 100s. Some Aussie 200fr talent coming in time for Tokyo.

2
0
Reply
Caeleb Dressel Will Get 7 golds in Tokyo

Is Chalmers for sure adding the 200m? I’d love to see that. Incredible swimmers becoming focused on just one event is very frustrating, and in my opinion, is a major cause of burnout.