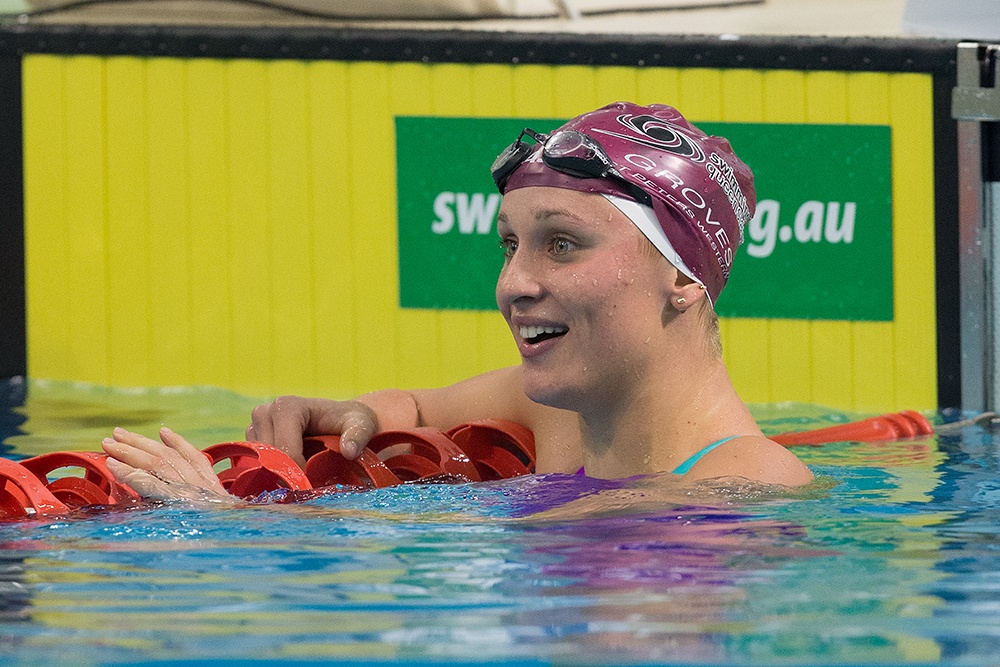 This weekend's Victorian Open Championships will give Aussie stars one more big racing practice in before next month's Commonwealth Games Trials. Archive photo via Steve Christo

With the Australian Commonwealth Games Selection Trials just over a month away, athletes down under are getting in some final racing at the 2018 Victorian open Championships scheduled for January 12th-14th at the Melbourne Sports Aquatic Centre (MSAC). Mainstay powerhouses will be sprinkled throughout the 64 events held over 3 days, but some young guns will also be ready to make their marks ahead of the Trials set for February 28th – March 2nd.

One of those youthful forces is 19-year-old Jack Cartwright, the St. Peters Western swimmer who made a name for himself with wicked-fast swims at the 2017 World Championships. A relatively inexperienced competitor at the senior level, Cartwright made the men’s 100m freestyle final in Budapest, while also scoring solid splits on his nation’s 4x100m freestyle and 4x200m freestyle relays.

This weekend we’ll get a preview of what this young star can do against domestic teen rival and 2016 Olympic Champion, Kyle Chalmers. The pair are set to race against one another in the 100m freestyle, where Cartwright actually holds the top seed in 47.97, as well as the 200m freestyle, where Chalmers is the hunted with his sub-1:47 time of 1:46.87. The sprinting duels will be a highlight of this meet, as well as at the Gold Coast next month, where James Magnussen and Cameron McEvoy will also be dominant players in the mix for Commonwealth Games individual and relay berths.

An even younger talent in Tom Hauck has been making waves in Australia all year, as the 15-year-old All Saints swimmer crushed a few Queensland records earlier this season, one of which belonged to Ian Thorpe. Hauck’s highest seed this meet is his 10th place position in the men’s 200m IM, but he’s also situated as the 11th-seeded swimmer in the 400m free and 100m backstroke entering this meet. Look for young ‘Tom-a-Hauck’ to rise within the ranks, as the teen has been dropping time and lurking in the shadows of the Australian big boys already this year.

Mitch Larkin will be taking on his usual 100m and 200m backstroke races, but also comes into the meet as the top seed in the men’s 200m IM. Larkin lit up the event last moth at the Queensland Championships, where the 24-year-old established a new personal best of 1:58.89. The St. Peters Western double world champion from 2015 is making a case to add the 200m IM to his backstroke line-up for next month’s trials, holding the only entry time under the 2-minute mark.

On the women’s side, 2016 Olympic silver medalist in the 200m butterfly, Maddie Groves, is expected to make a full-fledged racing comeback after her missed-doping-test debacle that disrupted her training this year. Groves was 1 of 3 Aussies, along with Thomas Fraser-Holmes and Jarrod Poort, named as having missed 3 drug tests over a 12-month period. Groves was the only swimmer to have been cleared to compete and the 22-year-old is slated to show us what she’s got across the 50m fly/100m fly/2000m fly, as well as the 50m free and 100m free events.

Racing mainstays Emma McKeon, Brittany Elmslie, Emily Seebohm, Minna Atherton, Leah Neale, as well as the McKeown sisters are entered in this weekend’s Vic Open to get some fine-tuning in for next month.

Training partners Mack Horton (AUS) and Gregorio Paltrinieri  (ITA) will battle in the men’s 400m  and 1500m freestyle races this weekend as well.

Horton vs. Paltrinieri Down Under. I’ll be checking the results of that one.

What race strategy would work for Horton vs. Paltrinieri (who likes to take the lead early and run away from the field)?

Looking forward to see how quick Jack Cartwright can go this year after his breakout year & experience he got last year.

He’s going up against Chalmers, McEvoy, and Magnussen. So he’s got plenty of people to push him to a fast swim.

Australia has more swimmers under 48 seconds than any other country..

Some very interesting racing there.

On paper, it certainly reads as an amazing line-up …. and a potentially world-beating M4x100. Just one issue; that of having them all swimming that fast at the same time. In reality, that liklihood isn’t really that great. Magnussen hasn’t swum sub48 flat start in 4 years and has only crept under 48.5 once post operation. We’ve yet to see any signs of speed post heart op from Chalmers. One can hope that he returns to his Rio level but we certainly cannot “take it as read”. That there will be one AUS swimmer sub48 flat start at both Trials & CG IS a fairly sound proposition and two would not be a major surprise. However, any more than that… Read more »

The next 2 weekends will tell us a great deal more as to how people are actually tracking with the 2 main lead in meets to Trial being held (Victoria this weekend, NSW the next). Many are doubling up whilst others are only swimming one. The following are the national teamers listed for the respective meets: Vic: Horton, McKeonD, McKeonE, Elmslie, Groves, Irvine, McKeown Sr, McKeown Jr, Hansen, Bohl, Packard, Wilson Mat, Cave, Ngawati, Cartwright, Chalmers, Roberts, Smith, Larkin, Treffers, Beaver, Seebohm, Whittaker, Mahoney, NSW: McEvoy, Wilson Md, Winnington, Atherton, McKeonD, McKeonE, Elmslie, C1, C2, Ashwood, McLouglin, Bohl, Irvine, Smith, Hprton, Ngawati, Hansen, Whittaker, Magnussen, Roberts, Treffers, Wilson Mat, Morgan, Paltrineiri will be swimming both meets as will Caldwell (CAN).… Read more »