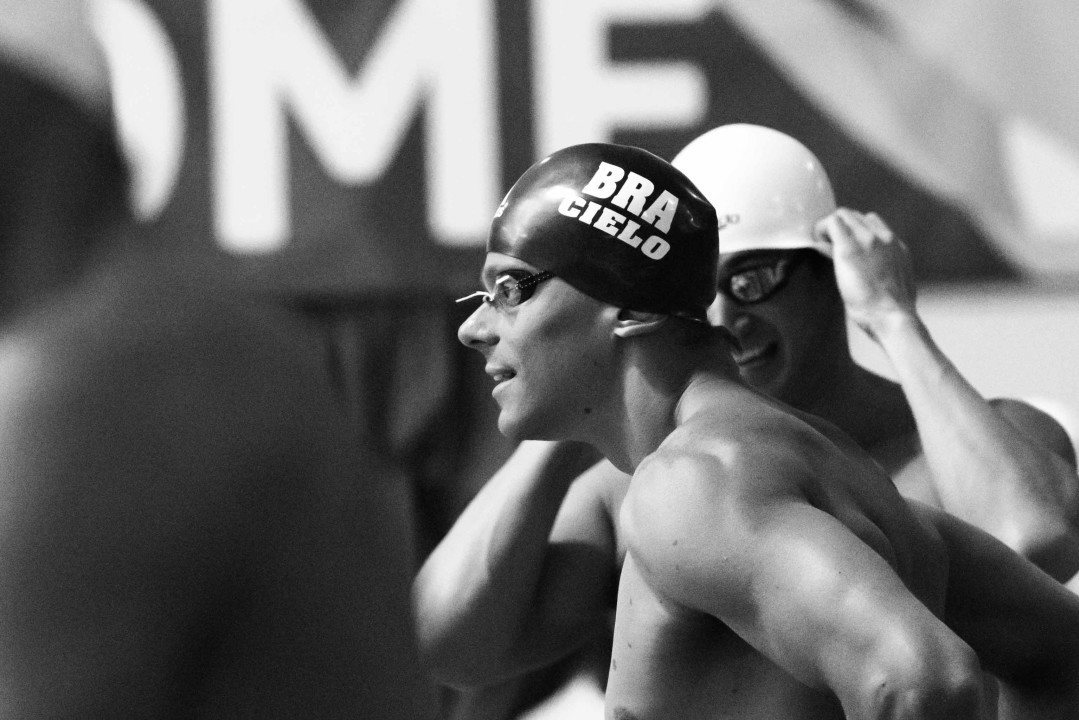 The registration deadline for the Jose Finkel Trophy– which will serve as Team Brazil’s qualifying meet for the 2016 World... Archive photo via Mike Lewis/Ola Vista Photography

The registration deadline for the Jose Finkel Trophy– which will serve as Team Brazil’s qualifying meet for the 2016 World Short Course Championships- has officially passed. Notably absent from the entrants, per Minas Tenis Club, is Cesar Cielo. This removes Cielo, the 2014 World Short Course Champion in the 100-meter freestyle, from contention for the Brazilian contingent.

Despite missing the team to compete in front of his home country at the 2016 Olympics and passing up the qualifying meet for the 2016 Short Course World Championships, Cielo is not retiring. He will continue training with Arizona-based coach Scott Goodrich, with whom he worked with after the London Olympic Games and leading up to the 2016 Brazilian Olympic Trials. Cielo’s training hints at a return for the 2017 World Long Course Championships, to be held in Budapest. His last major competition was the 2016 Brazilian Olympic Trials, where he finished third in the 50-meter freestyle, just shy of qualifying.

Cielo is the most decorated Olympic swimmer from Brazil, having won sixteen medals in World Championships, both long course and short course, spanning back to 2004. He is the current world record holder in the 50-meter (20.91) and 100-meter (46.91) freestyle, as well as the gold medalist in the 50-meter freestyle at the 2008 Beijing Olympic Games.

Time to change training or hang it up.

He has changed coaches/training 10x more than most elite athletes. He just needs to hang it up. I would bet he just doesn’t want to train and it has caught up to him ……looking at his results over the last couple years.

Why should he listen to your uneducated and uninformed recommendations. He is an athlete that can do and choose whatever he wants to do.
How would you feel if he came to McDonald’s and told you that you should stop working there?
You’ve never won an Olympic Medal. You’ve never been to the Olympics. You’ve probably never even been to an Olympic trials.
He can make that decision when he is right and ready to.
There really are some plonkers out there and you seem to be heading the pack

Because he has nothing left to prove. He has won at every level (clean or not) and his career is on the decline. Similar to many post grads prolonging their careers because they don’t know what to do with their lives and are afraid to get a real job and move on into the real world.

If Cesar asked me to quit at McD’s i would heed his advice and move on.

I thought he retired?

I wonder… What are his goals at this point?