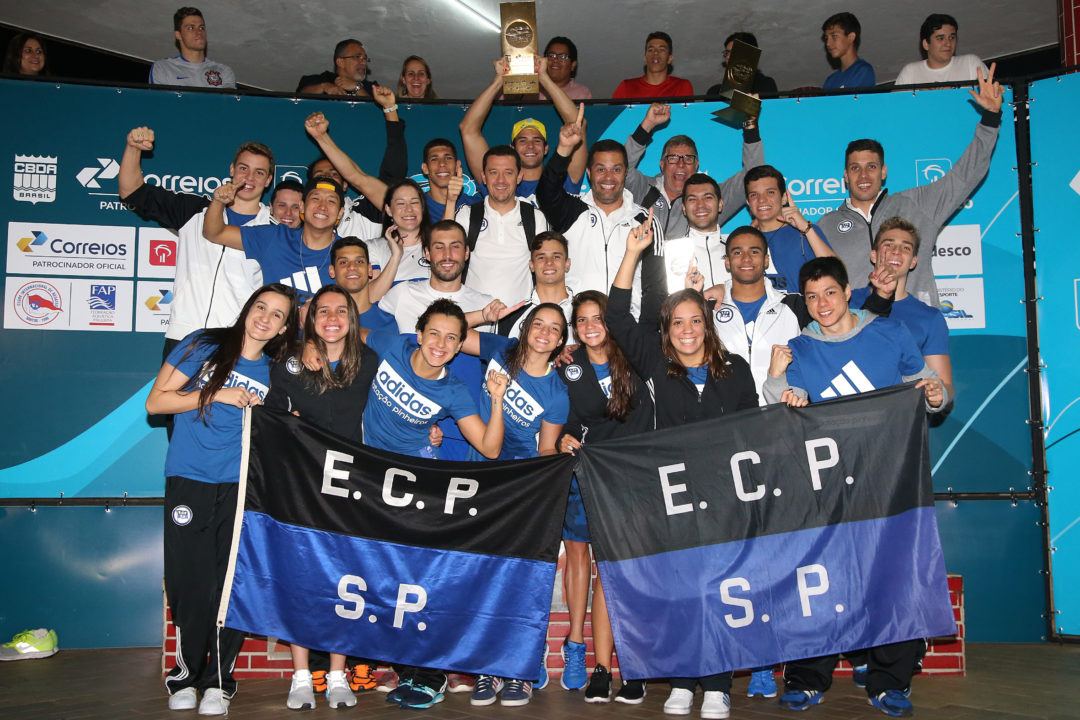 At the conclusion of the 45th edition of the Jose Finkel Trophy the Pinheiros walked away with their 12th title in the club's history... Current photo via Satiro Sodre/SS Press

At the conclusion of the 45th edition of the Jose Finkel Trophy the Pinheiros walked away with their 12th title in the club’s history. The Pinheiros won the title with 2,664 points followed by Minas Tennis Club with 2,11.5 points and the Corinthians who scored 1,682.5 points.

There have been 12 South American records set over the last week of racing at the competition and the final two were posted on Saturday evening. The first came in the women’s 50 breaststroke where Jhennifer Conceicao won the event in a time of 30.31 breaking the record of 30.50 set in 2009 by Tatiane Sakemi.

The second came in the women’s 4 x 100 medley where the Minas Tennis Club took the event in a time of 3:57.00. It is interesting to note this is the first time a South American record has been held by a team that consisted of multiple nations as one of the athletes on the relay is from Argentina.

Andrea Berrino of Argentina set a new championship record in the women’s 200 backstroke winning the event in a time of 2:06.91. Berrino dominated the race finishing three seconds ahead of the field.

Felipe Franca finished off his sweep of the breaststroke events taking the 50 in a time of 26.09.

The most exciting race of the evening was the women’s 100 freestyle where Larissa Oliveira was able to get her hand on the wall just before Etienne Medeiros. Oliveira won the event in a time of 53.03 followed by Mediros who posted a 53.07.

Gabriel Silva Santos won the men’s event in a time of 47.50.

The meet also served as a qualifier for the World Short Course Championships in Windsor, Canada this December. Five athletes who earned automatic berths onto the team which include Felipe Franca, Thiago Simon, Nicholas Santos, Etienne Medeiros and Felipe Lima. There will be more athletes added to the team, which will be announced by the CBDA next week.