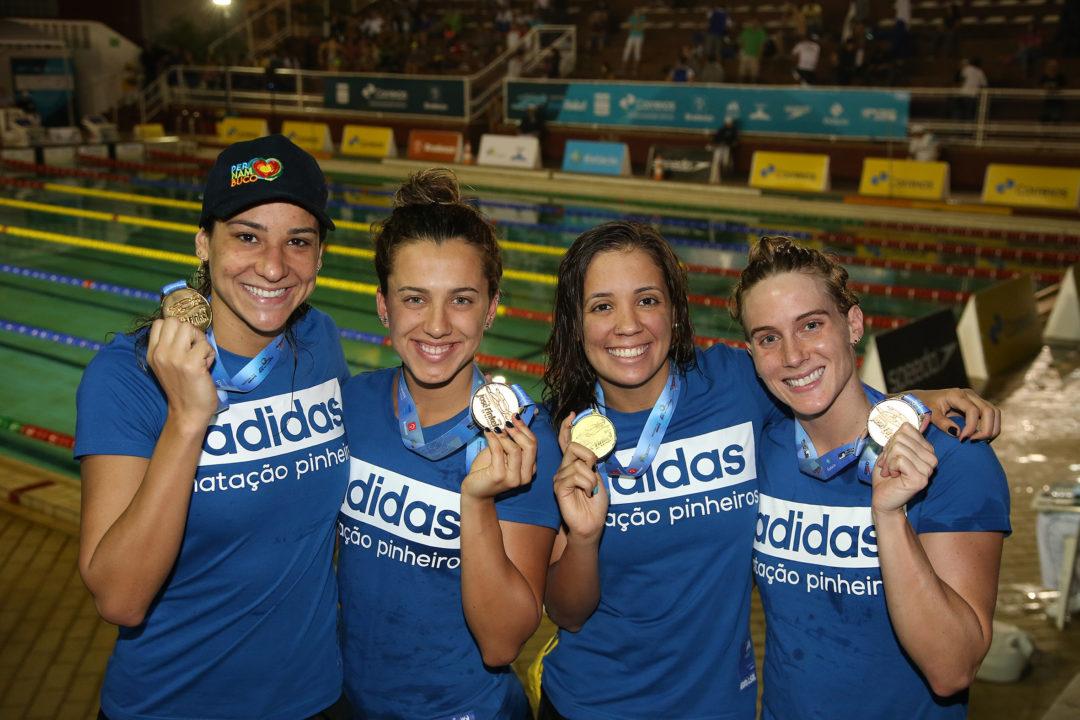 Then in the final event of the night Maranhao joined forces with Pinheiros teammates Joanna Maranhao, Manuella Lyrio, Aline Rodrigues and Larissa Oliveira to break the South American record in the women’s 4 x 200 freestyle relay. The team put up a time of 7:52.71 destroying the previous record of 7:58.84 set by Paulista in 2014. Two of the members of this evening’s record breaking relay, Rodrigues and Oliveira, were also on the Paulista team that set the mark in 2014.

That was not the first South American record broken on Wednesday. In the prelims Eitene Medeiros posted a time of 23.88 to set a new continental record in the women’s 50 freestyle. Medeiros won the event, but was not able to beat her morning time putting up a 23.91 in the final.

Viviane Junglut was well off the South American record in the 800 freestyle, but did post a Brazilian record winning the event in a time of 8:19.57 finishing almost 15 seconds ahead of the field.

Joanna Maranhao set a new championship record in the women’s 400 IM putting up a winning time of 4:33.92.

Nicholas Santos followed up his win in last night’s 100 butterfly by grabbing the gold in the men’s 50 freestyle beating out three Brazilian Olympic team members; Marcelo Chierighini, Italo Duarte and Bruno Fratus. Santos took the event in a time of 21.41.

The standings after the third night of competition saw the Pinheiros holding onto the top spot with 1,219 points followed by Minas (928) and the Corinthians (828).