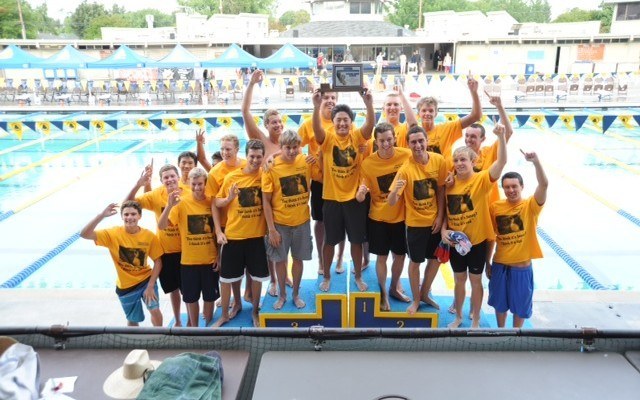 The Bells won their 30th straight CCS title thanks to strong finals swims from a very deep bench. Current photo via Pat Kirk

The 2013 meet was a blowout: Bellarmine Prep beat second-place Palo Alto High School by 148 points. In 2012 it was 171.5 points; in 2011, 163.5. But rather than relegate themselves to also-ran status the Paly boys kept picking themselves up and giving it another try, like David going to battle against Goliath. And this year, for once, they were within reach of the prize; it would all come down to the last relay.

To set the stage, Paly had -for the first time in umpteen years- outscored Bellarmine in prelims. The lead moved back and forth between the two until the diving, where Paly scored a bundle and jumped out to a 27-point lead. Bellarmine came roaring back, though, and by the end of the 200 free relay they were up (on paper) by 29.5. By nabbing four of the top eight slots in back Paly moved ahead, and even losing ground to Bellarmine in the breast and 400 free relay they still could come out on top.

Paly got off to a nice start by winning the 200 medley relay in CCS record-breaking fashion: their 1:31.28 lowered Saratoga’s CCS mark of 1:31.84 from 2009 by .56. William Lee, Scott Powell, Andrew Liang, and Winston Wang contributed to the effort. Saint Francis (1:32.04) took second with Benjamin Ho, Curtis Ogren, Gautham Bommannan, and Sean Elmurib. Los Gatos touched out St Ignatius and Bellarmine for third.

From the very first individual event Bellarmine began to outperform their prelims placements. Junior Aidan Burns won the 200 free in 1:37.15 and the Bells got an extra bump from junior Cooper Burrill who moved up a couple of spots from prelims and finished second, a half-second in front of Leigh senior Michael Hannigan.

The 200 IM proved to be an exciting race as Saint Francis senior and future Stanford Cardinal Ogren once again broke the National Independent School record. He had held it since last year’s CCS championship when he swam a 1:45.01. This time he lowered it to 1:44.90. Second and third went to Bellarmine’s Michale Messner (1:48.85) and Santa Cruz’s Gabe Bolender (1:50.68).

Paly’s Andrew Liang won the 50 free in 20.41, a tad off his prelims time. The Stanford-bound senior touched .58 ahead of Albert Gwo of Los Altos; Stefan Kranenburg of St Ignatius was third. The 50 free was one of Bellarmine’s most successful events; they picked up six points over prelims with two swimmers in the “B” final: Thomas Reed and Nico Fasan.

Andrew Liang of Paly was back after diving with another victory, this time in the 100 fly. His 47.44 didn’t lower his own recently-established CCS record (47.09, set in prelims) but was good enough to win by two seconds. Three sophomores finished nearly together for second through fourth places: Chistopher Staka of Aptos (49.46), Daichi Matsuda of Gunn (49.69), and Matthew Thomas of Valley Christian (49.75). In the meantime, Bellarmine added 3 points in better-than-prelims swims from a couple more of its consolation finalists.

At this point it was 165-139 in favor of Paly, but Bellarmine had its two strongest events coming up: 100 free and 500 free. Once again they exceeded expectations and scored points above and beyond what one might have expected from prelims. Saint Francis sophomore Ho won the 100 with 45.22 ahead of Gwo from Los Altos (45.37) and Leigh’s Hannigan (45.57). The Bells managed fourth, sixth, and fifteenth places. In the 500 it was a repeat performance for Bellarmine’s Burns and Messner, once again finishing 1-2 with 4:23.36 and 4:27.59, respectively. Freshman Jarod Hatch of Sobrato took third, less than a second in front of Paly freshman Alex Liang.

Paly’s big event, the 100 back, was up next. At the conclusion of the event the Vikings were actually up by 1 point, but they had lost ground from prelims. Ho of Saint Francis won the 100 back with a 49.56; Lee of Palo Alto finished second with 50.00, .64 ahead of Gunderson senior Corey Gutierrez.

Saint Francis’ Ogren followed up his National Independent School record in the 200 IM with another CCS record in the 100 breast. His winning time of 53.81 was 9/100 better than what he’d gone in 2013, the last time he had set it. Second place went to Joe Kmak of Junipero Serra (55.99), while Jonathan Panchak of Los Gatos got third.

With Bellarmine leading 282-276 going into the 400 free relay it was still possible for Paly to tie, at the very least, and win outright at best. But that depended on Bellarmine not living up to expectations, something which hadn’t happened all day. The Bells ended up winning the relay and with it the meet, extending their streak to 30 years at the top.

Too many California high school meets to keep up with. Where are results from whatever conference/district/section/region/division includes Corey Okubo?

Write-up is coming. In the meantime, try this: http://faculty.polytechnic.org/cifss/2014-D1-Finals%20Results.pdf

Thanks for the great coverage of high school swimming championships. Congrats to Coach Larry Rogers and the Bellarmine swim team.

10 years ago when, I was a senior at Bellarmine, we won our 20th straight CCS title. At the time, Cooper Burrill was a 10 and under at my club – Almaden Swim and Racquet Club. Now he’s helped the Bellamine squad win it’s 30th straight! Congratulations and Go Bells!