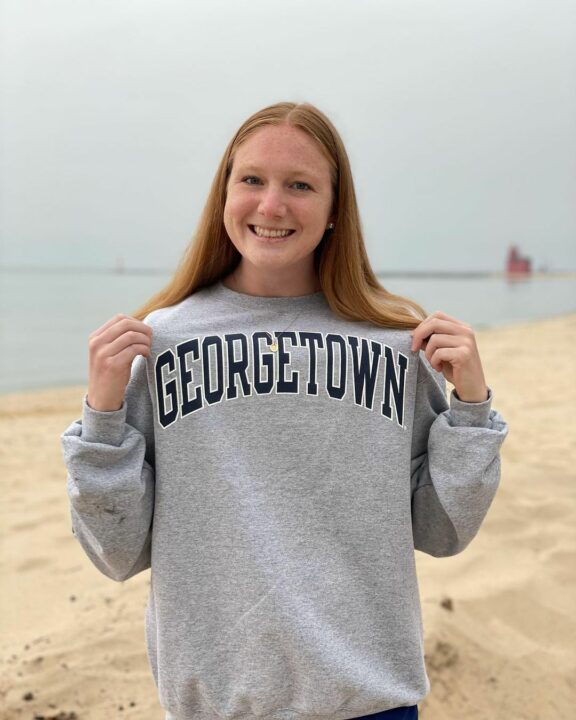 Caroline Sisson will be joining the University of Georgetown Hoyas with two remaining years of eligibility while pursuing her master's degree. Current photo via Caroline Sisson

After spending the first three years of her college career swimming at the University of Michigan, Caroline Sisson has announced that she will be graduate transferring to Georgetown University, where she will have one year of eligibility, as well as her Covid-19 year, left. Sisson is originally from Michigan, having grown up in Holland and swam for Michigan Lakeshore Aquatics.

Thank you so much to my coaches and teammates at the University of Michigan for an amazing experience, and thank you to the university for giving me the opportunity to finish my degree in 3 years. I am so excited to be continuing my education at Georgetown University with a Master’s of Science in Business Management. Hoya Saxa!

When Sisson initially committed to the Wolverines, she swam both breaststroke events, as well as the 200 and 500 freestyles. In her three years with the team, she made the transition to distance free, swimming the 200, 500, and 1650 freestyle.

For a Georgetown team that hasn’t qualified a female swimmer for the NCAA Championships in several years, Sisson will be a huge pickup. The Hoyas qualify any woman for the NCAA Championships in 2020, making her a massive addition with two years of remaining eligibility. Two years ago, she would have lead the team by a wide margin in her primary events, with a best time in the 1650 that would have been the team’s best by 40 seconds.

While Georgetown didn’t compete, the rest of the Big East held the 2021 Big East Championships at the beginning of April. At that meet, Sisson would have claimed the title in the 200, 500, and 1650. She will also have the potential to contribute on multiple relays, as her lifetime best of 52.37 in the 100 free would have made her new program’s 400 free relay in 2020. The women were the runner-ups at the 2020 Big East Championships.