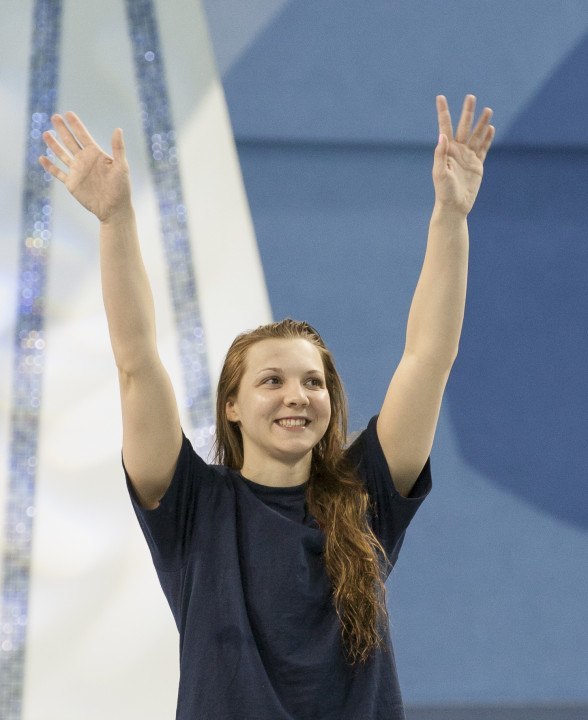 In the history of Canadian women’s Swimming, there have been few Olympic highlights. They have just one gold medalist all-time, Anne Ottenbrite from the 1984 Soviet Boycotted edition. To be fair, Marianne Limpert was robbed in 1996, where she finished second in the 200 IM to Ireland’s Michelle Smith. Smith was later issued a four year doping ban and was widely believed to have doped her way to massive improvements that year.

Since then, Canada has always been a country brimming with potential that could never break through. Canadian men have always managed to have one or two stars to carry them forward over the last thirty years. Alex Baumann and Victor Davis were world class in the 1980s in IM and breaststroke respectively. They gave way to 1992 Olympic backstroke champion Mark Tewksbury. Then came back to back Olympic medalist Curtis Myden (IM). A brief bleak period in 2004, and then the current era of Ryan Cochrane.

For the women, there have been fits and starts, swimmers who make a big splash domestically but cannot finish the job at the biggest competitions. Joanne Malar won both IMs at the 1999 Pan Pacific Championship, but finished just 5th in the 200 IM in Sydney. Brittany Reimer was not quite world class when she debuted in 2004 (she was just 16 years old at the time), and by 2008 her career was all but over. Annamay Pierse came on like a rocket ship in 2009, breaking the world record in the 200 breaststroke. She too ended up being just a flash in the pan.

In 2016, Canada has perhaps more hope than ever of notching a women’s medal in Rio. Here, in order of likelihood, are the three swimmers that can make Canada’s sad history just that:

MacLean has a puncher’s chance in either of the women’s distance races, and is peaking at the right time. She also has Olympic experience, and more importantly the right kind of Olympic experience. She was not a spectator in London, she swam well and made her way in the 400 freestyle final. She’s had some decent international results since then, including winning two medals at the 2014 Pan-Pacs.

If MacLean can match her improvement from the 2012 Trials to the Olympics, she should be in line for around a 4:02 or below 8:20 in the 800, both of which have a good chance of medalling in those races.

Oleksiak is coming on like a freight train, having improved her 100 butterfly by nearly a second and a half in the last few months.  One of the things to look out for in Olympic years are teenage swimmers like this, as their improvement curves are less predictable. It’s possible that Oleksiak could be a lot faster come Rio. That is significant because right now there are few swimmers differentiating themselves from the pack behind Sarah Sjostrom.

If Oleksiak can continue to improve to a 56 low (not out of the question, considering she was swimming 1:01s just one year ago), she should win a medal. She has experience working against her, yes, but perhaps it could be to her advantage for the moment as she rides the high momentum of rapidly improving.

Thomas’ candidacy has a lot of the same arguments as Oleksiak, with a few key distinctions. Thomas is older (1996 birth year versus 2000 for Oleksiak). Still, Thomas is relatively young and having a nice year after plateauing for several years. Thomas has been through a lot- going from the high of winning gold at the Junior Pan-Pac level and then not improving for a couple years.

Now Thomas has found her footing, and seems to be a good fit with Teri McKeever, one of the best coaches in the world. Like Oleksiak, if she can separate herself from the pack behind Sjostrom there is an opportunity for her.

Ultimately, it whether or not one of these swimmers breaks through will be a huge part of how Swimming Canada High Performance Director John Atkinson is evaluated. Canadian women’s swimming has been underperforming at the Olympic level, and if Atkinson can turn that around, it will reflect well on his leadership during this cycle.

Womens 50/100/200 free: Wont happen in my opinion
Womens 400/800 free: Very small chance for McLean, but i favor Ledecky/Carlin/Ashwood/Van Rouwendaal.
Womens 100 back: Small chance for Masse, but at least Seebohm, Wilson and Nielsen look clearly stronger.
Womens 200 back: I dont see how Caldwell wants to challenge Franklin, Seebohm or Hosszu.
Womens 100 fly: Might be the best chance for an individual medal. Sjöstrom is out of reach, but Ottesen and the chinese girl are not out of reach. Oleksiak has to hope that Vollmer and Worrell wont swim 56 low in Rio.
Womens 400 IM: Probably the second best chance for an individual medal. Hosszu and Belmonte should win gold and silver,… Read more »

Great to see Sasha’s son on the team!

I won’t miss a session this summer…..very excited to see it all play out.
Thanks swim swam – love the articles and all the comments!!!!!!

“Smith was later issued a four year doping ban and was widely believed to have doped her way to massive improvements that year.”

Now, when you see something similar today, better be wary of such swimmer.

Thought about it, but this article is about Canadian women’s swimming, not Michelle Smith.

Perhaps you have something there but the problem is also building the right momentum.

You mentioned Van Moerkerke. Don Burton is the head coach of the Guelph Varsity team and he and the staff around him have worked miracles with swimmers that didn’t start as age group stars. If you track Van Moerkerke’s improvement, along with team mates like Eric Trevisan, you can see that the ability to develop talent is there.

More Canadian age group swimmers need to see that small schools, along with the larger ones, have very talented coaching staff that might be right for them to be successful. Rather, many athletes are being recruited south with some hit and miss success stories or going… Read more »

Thumbs up to this. I don’t think we are missing great coaches, I think we are missing the resources to recruit and retain our best. Until Canadian Universities value what these student athletes bring to a campus similarly to US schools we will continue to have a talent drain. The HPCentres are succeeding not only because they have some great coaches but the people there also have access to funding and resources that I don’t think the Canadian uni system can provide right now.

We also need to build up some depth in our system to have the level of competition our elite athletes need, Just thinking about the medal winners last week that are high schoolers, why would Javier,… Read more »

Ay Captain. These aren’t problems though and everyone wins really. Brittany and Chantel going to Georgia benefits the bulldogs with sec and ncaa championship wins while it frees finite carding dollars for swimmers at the bottom of this list who otherwise wouldn’t have received anything.

The biggest omission in this post is Kylie Masse. Has improved tremendously over the past year and if she manages a 58.5 come Rio, she could easily be in the hunt. Caldwell has medalled at Worlds in the past and has been 2:06.8 (2013). If she can dip below that she will definitely be a threat.

The larger problem is how many swimmers Canadian universities are producing. I only count 3: Masse, Van Moerkerke, Seltenreich-Hodgson, not sure about Kisil. The rest are high schoolers or post grads. The Canadian University Swimming system is in its death throes.

That’s kind of my point. If nothing changes in the CDN university system we might as well just have a dual meet between HPC-Van and HPC-Ont. The rest can all just go to easterns or westerns and get beat up on by high schoolers. Of course there will always be a few exceptions like Masse, but exception proves the rule and all that.

That point wasn’t very clear in your original comment, and I was only clarifying the fact that Kisil is indeed a university swimmer in Canada, and he has been on the national team before while swimming in the varsity system at UBC

It really is great to see the Canadian women becoming more competitive; however I wonder how many of these tremendous athletes and olympic medal prospects are actually training in Canada? Out of the three current prospects you mention I think only Penny Oleksiak.

A point in case is the improvements made by breaststroker Jason Block…after leaving the University of Calgary program to train in California.

We are happy to claim them as our own, and to be fair, at least some of them swam their age group years in Canada, but it seems to be really successful many of them have had to leave for points south.

Yes some swimmers have gone south but I think you overstate the number. I wouldn’t say “many”.. Of the Olympic team it might be 4? (Can’t think of them all off the top of my head). Tons of great swimming happening out of CANADIAN clubs and training groups – Ryan Cochrane, Emily Overholt, Penny Oleksiak, the sprint girls from Ontario (Vanlandgham, Williams, Mainville), Javier Acevedo, Hillary Caldwell, Dominique Bouchard etc etc etc

Condorelli
Smith
Ruck
Pickrem
Bouchard
Nicol
Goss
Thomas
MacLean
van Landeghem (though I think over the last year she’s been mostly in Canada? Mitch would know better than me)

The only one I think you missed is Maclean.

Yep good call. Will amend my list to add her.

Missed Baumann (australia) and Williams (ohio state grad). It will take an act of God for Darragh (mizzou) and Block (Trojan) not to be nominated.

Fair enough Braden. I’m still putting Williams on my list though. Once a Buckeye always a Buckeye

Hadn’t heard that update. Thanks for sharing.

To be fair, MacLean was a two time Olympic finalist before she ever stepped foot on the campus in Athens. The NCAA athletes are not “non-canadian” successes. Many of these athletes have had their swimming enhanced greatly by the time spent developing in the Canadian Junior program and there respective Provincial junior programs. Many think the NCAA athletes have committed swimming treason but they are simply talented young swimmers who have choices. Both paths have strengths and weaknesses but these young athletes have selected the path that they believe will serve them better. I think it’s too bad we can’t celebrate the fast swimming and be proud that they’re Canadian.

I saw that today & could not resist.