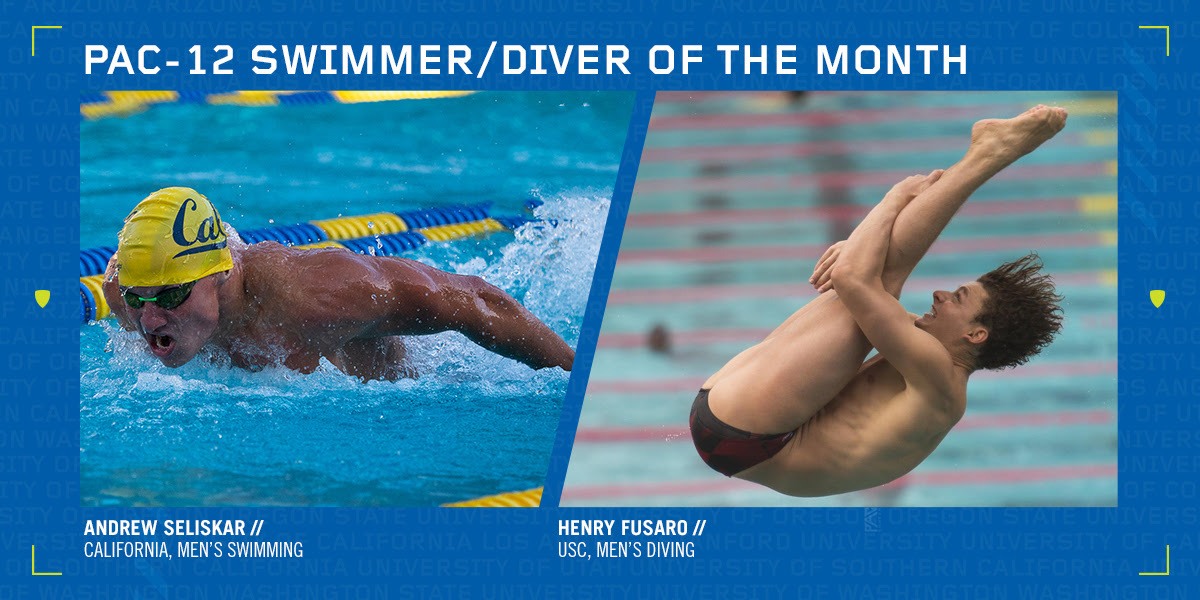 Seliskar (McLean, Va.) dominated at the Georgia Fall Invitational in November, helping Cal defend its title at the competition in Athens, Ga. The senior won the 200 individual medley and the 200 breaststroke, in addition to winning three relays while achieving six NCAA “A” qualifying times. His 200 free time of 1:30.86 as the leadoff leg of Cal’s 800 free relay set a program record and is the third-fastest mark in NCAA history. Seliskar, along with teammates Michael Jensen, Ryan Hoffer, and Pawel Sendyk, finished the meet by winning the 400 free relay and setting the top time (2:48.44) in the nation this year. This is Seliskar’s second-career monthly honor and the 15th all-time monthly swimming accolade for the Bears, the most of any Pac-12 program.

Fusaro (Scottsdale, Ariz.) earned first place in eight of the nine events he competed in this November, only finishing second in the platform event at the Trojan Diving Invitational at the Uytengsu Aquatics Center in Los Angeles, Calif. on Nov. 9. The junior won the 1-meter (729.45) and 3-meter (755.60) at the invitational, the second-straight year he won both events at the meet in his home pool. Fusaro set a personal-best score on the 1-meter (402.25) to win the event at the Utah Invitational, while also taking first place in the 3-meter (427.80). This marks his second-career monthly honor and the ninth all-time monthly diving accolade for the Trojans.