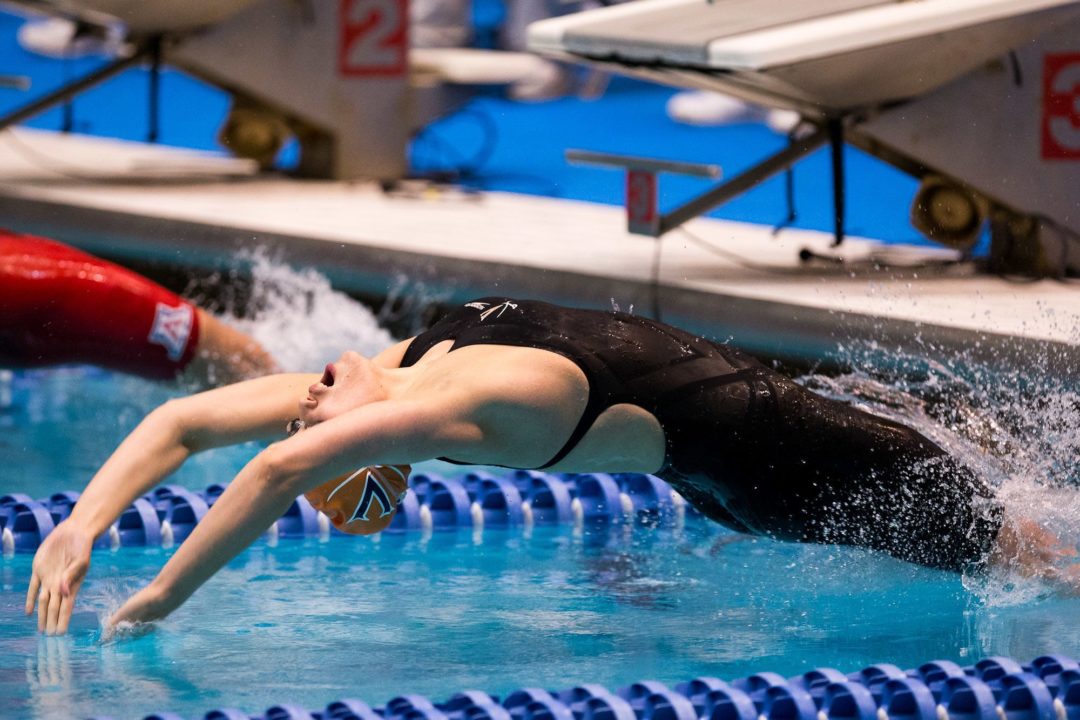 Courtney Bartholomew and the Virginia Cavaliers posted the second fastest time in the nation in the 200 medley relay at the Georgia Fall Invite on Saturday Archive photo via Tim Binning/TheSwimPictures.com

The Georgia men and Cal women stand atop the standings, although neither has a comfortable footing, following a flurry of NCAA A cuts, at the Georgia Fall Invitational.

The meet opened with four women’s teams achieving A cuts in the 200 medley relay. Courtney Bartholomew, Laura Simon, Ellen Williamson and Ellen Thomas combined for a 1:36.07 for the University of Virginia and the second fastest time in the nation. Laura Simon split a 27.31 for the Cavaliers in the breaststroke. The Cavalier relay also broke a school record.

Cal’s team of Rachel Bootsma, Marina Garcia Urzainqui, Noemie Thomas, and Farida Osman followed the Cavaliers in with a 1:36.82. Bootsma was 23.72 for the fastest backstroke split of the evening. Florida State was next with a 1:37.57 from Bianca Spinazzola, Natalie Pierce, Chelsea Britt, and Kaitlyn Dressel.

The last A cut in the relay came from Auburn’s A relay. Jillian Vitarius, Natasha Lloyd, Megan Fonteno, and Allyx Purcell combined for a 1:37.81.

On the men’s side, Cal swam to an A cut with the team of Ryan Murphy, Chuck Katis, Justin Lynch, and Tyler Messerschmidt, combined for a nation leading time the second fastest time in the nation with a 1:24.15. Murphy was 21.26 on the backstroke leg. Messerschmidt anchored with an 18.92.

Auburn was second with a 1:24.45, narrowly edging Georgia’s 1:25.47. Joe Patching, Michael Dunerstadt, Arthur Mendes, and Kyle Darmody made up the Auburn relay. Taylor Dale, Nicolas Fink, Pace Clark, and Michael Trice were the Georgia swimmers. Trice anchored with an 18.92.

On the men’s side, defending NCAA 400 IM champion Chase Kalisz swam a 3:39.28, the fastest time in the nation this year. Gunnar Bentz and Jay Litherland took second and third with the next two fastest times in the nation at 3:40.57 and 3:41.52.

No swimmer had an A cut in the women’s 100 yard butterfly, although Chelsea Britt of Florida State and Osman were the closest. Britt missed the cut by .1 seconds with her 51.80. Osman was just off as well with a 51.92.

Lauren Harrington finished third for the Bulldogs in 52.05.  Noemie Thomas was fourth for Cal in 52.21, and Ellen Thomas was fifth for Virginia in 52.49.

Connor Knight was fourth for the Seminoles with a 46.91, followed by Alexander Hancock for Auburn in 47.16.

Matias Koski was the closest men’s swimmer to an A cut, but was still over a second away with his 1:34.67 for Georgia.

Koski beat the field by almost a second. Long Guiterrez of Cal finished second with a 1:35.50, followed by his teammate, Trent Williams, in 1:36.13.

Alec Cohen and Kevin Litherland rounded out the top five for Georgia with a 1:36.13 and 1:36.82, respectively.

Virginia’s Laura Simon narrowly missed the 100 breaststroke A cut in prelims, going 59.15, and added slightly in finals, touching in 59.41 for the Cavaliers. Natasha Lloyd and Annie Lazor both added time from prelims as well. Lloyd finished in 1:00.66, and Lazor touched in 1:00.83.

Sami Pochowski of Florida State and Garcia Urzainqui of Cal rounded out the top five in 1:01.02 and 1:01.26, respectively.

Virginia’s Yannick Kaeser took second with a 52.47, a new school record. Kaeser’s time took down Olympian Ed Moses’ record of 52.60, the oldest record on the Virginia board.

Duderstadt was third with a 52.54 for Auburn. Fink touched fourth for Georgia with a 52.61, and Jason Coombs Florida State rounded out the top five with a 53.50.

After blasting a 50.01 yesterday on the leadoff leg of the 400 medley relay yesterday, Bartholomew swam a 50.39 for the Cavaliers in the individual 100 backstroke. Bootsma of Cal also had an A cut with a 51.20.

Pelton and Franklin tied for third with a 51.85, followed by their teammate, Melanie Klaren, in 51.86, giving the Golden Bears four of the top five spots and shutting Georgia out of the top five.

Ryan Murphy posted the nation’s fastest 100 backstroke time for Cal in the men’s half of the action. Murphy’s 45.55 in the final propels him ahead of Grant Betulius of Iowa, who was 45.56 yesterday on the 400 medley relay.

Hali Flickinger, Jordan Mattern, Madeline Locus, and Brittany MacLean swam the Georgia relay to an A cut as well, although they could not match up with Cal. Led by Mattern’s 1:44.47, Georgia hit a 7:02.69.

Virginia’s A relay also had an A cut time with a 7:08.85. Leah Smith, Hanne Borgersen, Ellen Williamson, and Kaitlyn Jones made up the relay.

Georgia’s B relay, made up of the Litherland triplets and Nicolas Fink was third with a 6:26.75.

According to the results Ryan Murphy swam a 45.30 in the 400 Medley Relay last night.

Pretty happy with the results on both sides. GO BEARS!

As expected a huge men’s 400 IM. Veteran Kalisz won in a great 3.39.28 but had to push hard against his younger training partners Bentz and Litherland (Jay). The IM training sessions must be very fun at Georgia! Both freshmen crushed their best times in 3.40.57 and 3.41.52. Bentz is much better in long course so it’s cool to see him improve like that in yards. A sign he’s already more powerful. Remember what I said 2 or 3 years ago. He’s a diamond to polish with a long body built for swimming. Clearly a future star in the making. With more power and a few years more of training he will be hard to beat. Of course he still… Read more »