Cal Wins 4 of 6 Groups; 15 of 18 Events Against Stanford in Triple-Distance Meet 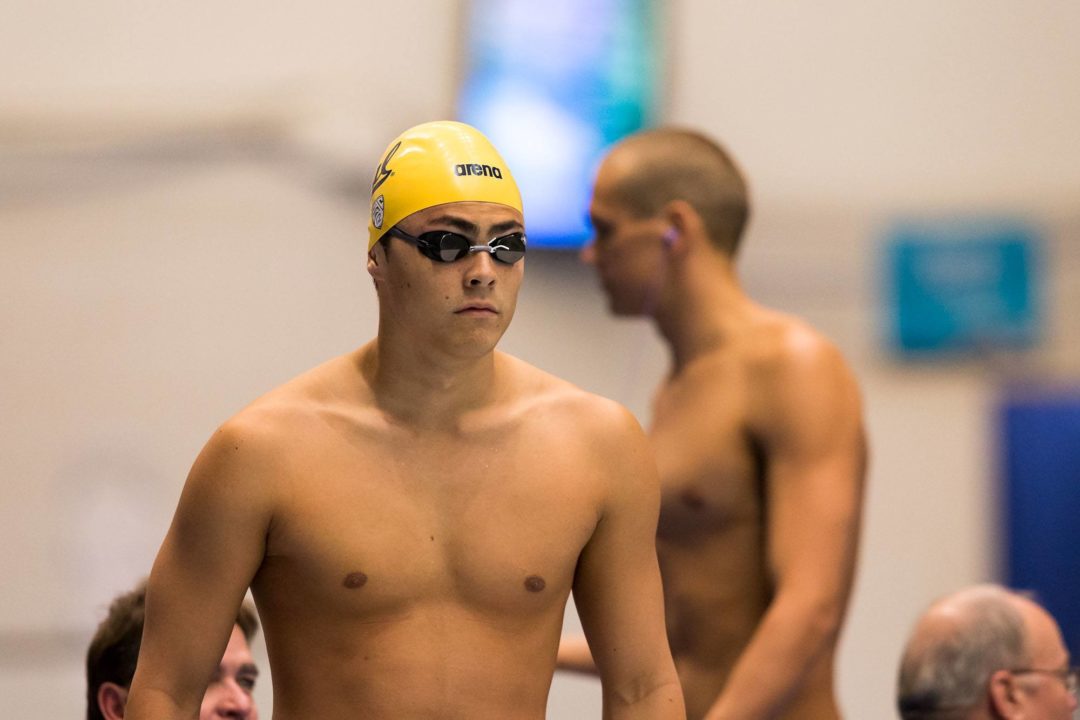 Though no official team score was kept, the edge at the 2013 Cal-Stanford triple distance meet was to the Cal Golden Bears, who took 4 of the 6 event disciplines and 15 out of 18 events overall.

This meet has a unique event format, where each athlete is put into their primary stroke group, and they swim three different distances within a discipline, and the lowest aggregate time gets the win.

Per group, the winners were:

Stanford sophomore Tom Kremer is building off of a very successful breakout freshman season, and he really dominated this butterfly group. Overall, he was a second-and-a-half better than his next closest competitor, Cal freshman Long Gutierrez, in aggregate across the three distances.

That 200 time knocked a full second off of Kremer’s previous season-best, and puts him second in the conference, behind only Cal senior  Marcin Tarczynski, this season.

Kremer took the overall win, with Gutierrez second, Cal junior Dane Stassi 3rd, Tarczynski 4th, and Stanford sophomore Gray Umbach 5th in 3:02.08. Stassi did well on the strength of a 1:48.42 in the 200 fly – this meet format tends to lend itself to the 200 butterfliers more than the sprint specialists, as the margins between a great 200 butterflier and an average 200 butterflier are much greater than the same in the 50.

Defending 100 back NCAA Champion David Nolan easily won the backstroke group on final times, but that wasn’t obvious from watching the swimming.

The difference in this backstroke was the 50. Nolan swam a 22.60 that is a very good time for this point of the season, and a Murphy DQ gave away the group early.

Neither of the legal times is quite his season best time, but excluding Jack Conger’s suited swims at the Texas intrasquad (which they did not official submit for consideration), Murphy now has the country’s three best times in the 100 and 200 backstrokes. It seems as though the hype surrounding Murphy has been well-justified early this year, and he’ll have confidence for the rest of the season after performing so well against Nolan.

Both Stanford and Cal are looking for someone in their breaststroke group will step up this year, and at this meet it was Cal’s Ryan Studebaker who did so and took the group in an aggregate time of 3:27.43. That gave him almost exactly a second edge over Stanford’s Mason Shaw (3:28.44), with that edge being built pretty equally across the three distances.

It’s worth noticing Stanford’s Christian Brown. Though he finished 7th out of 8 swimmers in the overall competition, was the second-best 50 breaststroker (26.21) and the best 100 breaststroker (57.05). His 200 time of 2:11.03, almost seven seconds behind Shaw and Studebaker, caused him to slide down the rankings.

This sprint group was the biggest of the meet, but it was still won by about the same full-second margin. Cal’s Tyler Messerschmidt won the group in 2:43.03, followed by his teammate Seth Stubblefield (2:44.01) and Trent Williams (2:46.31).

Messerschmidt and Stubblefield tied for the fastest time in the 50, with matching 20.21’s; Fabio Gimondi was second-best in 20.56.

It was little surprise that Cal’s Josh Prenot won the IM group, especially as his speed has looked better-and-better this season. It’s that speed, in the 100 IM, that was the bulk of the difference-maker here, as Stanford freshman Max Williamson gave Prenot a heck of a run in the two longer distances.

The two are really very similar swimmers. Both are on the older end of their class, both are great breaststrokers, neither has a glaringly weak stroke. Prenot is perhaps a bit better butterflier than Williamson, but Williamson has about four inches of height on Prenot if you trust the teams’ official rosters. It was fun to see those two battle on Wednesday evening, and will be fun to watch them continue to do so over the next three seasons.

Perhaps the biggest upset of the night came in the men’s distance group, where Jeremy Bagshaw won with an aggregate time of 15:17.14.

It wasn’t so much a surprise that he won, as Bagshaw has been on-fire the last couple of weeks; it was a bigger surprise, over the impressive Stanford distance group, that Bagshaw won by six seconds.

He topped all three events by over a second each. His 1:40.48 in the 200 free bettered the matching 1:41.9’s by Danny Thomson of Stanford and Jimmy Yoder of Stanford.

I believe Ryan Murphy of Cal won the backstroke group!

susan williams – I suppose you can believe what you want, but in the matters of fact, you would be incorrect. Murphy was DQ’ed in the 50, and therefore disqualified from winning the group.

It was announced incorrectly…your right!

Yeah, sounds like there was a hair of “home pool announcing” perhaps. Ha.

Using cumulative time puts too much weight on the longer distance event. They should generate a time scoring index for each distance then use the cumulative for the winner.

haha I was thinking the same. But I can see things getting complicated. Just adding the times together is easier for everybody. And I think part of this meet is to get the swimmers outside their comfort-zone.

I was thinking the same thing – either use points or multiply the times out, but they’re not scoring this or anything so no big deal either way.

Pretty cool meet to take a snapshot at potential components for medley relays. Cal’s versatility is solid if Durden can use Pebley and Cox in the IM and sprint groups.