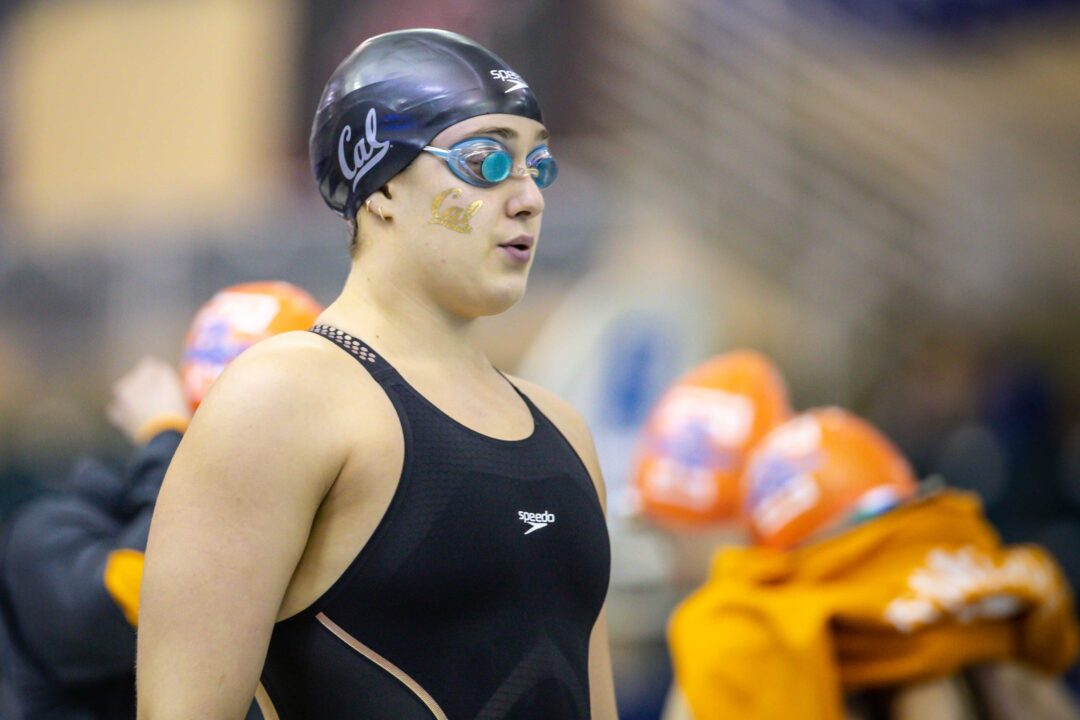 Cal competed in the first day of the meet, and were winning in team scoring through day one, but did not compete on the second day, and slipped to third place Stock photo via Jack Spitser/Spitser Photography

The 2022 Chick-Fil-A Invite is taking place in Fresno this weekend, featuring some of the top DI programs on the west coast. The first day of the meet was split up into two sessions, one in the morning and one in the evening. Cal competed in the first day of the meet, and were winning in team scoring through day one, but did not compete on the second day, and slipped to third place overall. It was UCLA that emerged victorious by a significant margin, with mid-major powerhouse San Diego State taking second. Washington State, another Pac-12 team, came in fourth.

They went on to win the next event as well, seeing Ayla Spitz clock a 4:49.86 to win the 500 free in a new pool record. She pulled away from UCLA freshman Katrina Bellio at around the 150 mark, ultimately beating her by four seconds.

Cal’s winning streak was broken by UCLA star sprinter Claire Grover, who swam a 22.57 to win the 50 free. She beat out Cal’s leading duo of sprinters, with Emily Gantriis (22.79) and Eloise Riley (22.89) taking second and third.

Leah Polonsky took the 400 IM to open up the second session of the meet, pulling ahead of UCLA freshman Ashley Kolessar in the middle of the race. Polonsky swam a 4:15.13, while Kolessar was 4:16.44.

With the Golden Bears gone for Saturday’s action, UCLA took charge. The Bruins won the 400 medley relay to open up Saturday, with their ‘B’ relay taking second. Unfortunately, the names for UCLA’s relays don’t show up on the results, but the ‘A’ relay swam a 3:44.09, while the ‘B’ was 3:45.39. Colorado State’s Lexie Trietley continued to impress on the that relay, anchoring her team in 49.81, which was the fastest free split in the field.

Katrina Bellio, a UCLA freshman from Canada, picked up a win in the 1650 with a 16:58.87. Bellio, who was an Olympian for Canada in the 1500 free at the 2020 Olympics in Tokyo, broke the pool record with her performance. Fellow UCLA freshman Beril Bocekler came in second with a 17:17.58.

San Jose State claimed their first win of the day in the 200 back, where Felicity Passon swam a 1:59.52 to touch first in a tight race. Athena Clayson out of Fresno State and Elizabeth Murphy (UCLA) tied for second in 1:59.75.

San Diego State saw Kristina Murphy post a 2:14.40 in the 200 breast, beating out Washington State freshman Emily Lundgren, who swam a 2:15.04. Murphy held a slight lead over Lundgren from the start of the race and was able to hold onto it through the finish.

Washington State picked up their first win with a 1:58.30 from Dori Hathazi in the 200 fly. That swim came a week after Hathazi swam a1:56.68 in Washington State’s intrasquad, breaking their pool record. A Hungarian national champion, Hathazi was strong in the middle of the race, splitting 29.74 and 29.67 on the middle two 50s, but fell off a bit coming home, splitting 31.19 on the final 50.

UCLA closed out the meet with a win in the 400 free relay, swimming a 3:24.25. Again, names didn’t show up on the results for the Bruins’ relays.

Is anyone else cringing at the thought of a Chick-Fil-A sponsored meet?

Last edited 3 months ago by C. B.
4
-4
Reply
Austinpoolboy

Why did Cal just swim the first day and then leave?

who wants to spend the weekend in Fresno

I’m impressed by Kragh’s 100 fly and split on the relay.
Now we just need a breaststroker.

Have they suited up ?

Cal dipping in the middle of the meet is an obvious attempt to lure Dressel to Berkeley.

It’s a poor attempt at a joke about how he left during World Championships.

this may sound dumb, but is Terry officially no longer a coach or is she on “leave”?

On the Cal website, she is still listed as “Head Coach” but at the bottom of the page and without a headshot pic.
That independent investigation needs to hurry the f up so this big loose end can get resolved.

I woundn’t be surprised if the Cal women’s team swam really well this year. They don’t have depth. They still have a lot of raw and untapped talent on their squad. They do have coaching and hopefully a culture change. I don’t know if they have real leadership amongst the ladies. Can they move beyond factions and cliques to form a real team? Can they balance demanding excellence and giving each other support? Not an easy task even with good leadership and guidance.

Yes. He’s formally on staff now, rather than end of last season where he was just a fill-in for paternity leave.

They are still sticking with the Chase Kreitler “paternity leave” story?? Really??

Not sure what that means. Chase definitely was on paternity leave as evidenced by the beautiful baby he and his wife had earlier this year. There is nothing wrong or sinister about taking leave from work to bond with your family.

Let us be happy for Chase celebrating fatherhood. Let him enjoy the fruit of his labor. 😁

You must know something that the rest of us don’t, because this is the first time that I’ve heard someone question that. I mean, his wife did have a baby.

he is implying that DM needed to…. well I am not sure what he is implying. But wouldn’t it be exciting if there was a story more complicated than real life?

Marsh paid Chase and his wife to have a baby so he could weasel his way onto the Cal coaching staff. Yeah thats it 100%.