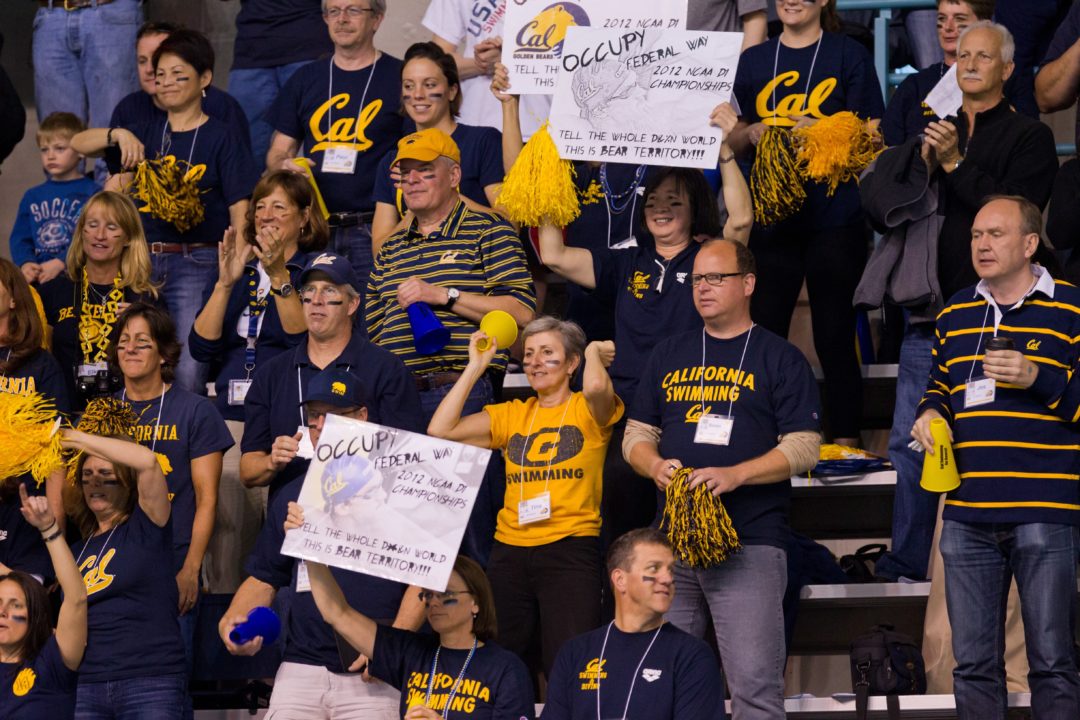 Cal has plenty of hardware after two-straight NCAA titles. This year, though, they've added their first Pac 12 title since 1981 (Credit: Tim Binning/TheSwimPictures.com)

California built a lead over Day 2 and 3 of the meet, and held off Stanford tonight to win the men’s Pac-12 Championship, ending Stanford’s 31-year run of conference titles–the longest conference streak in collegiate sports history. The Bears’ last Pac-12 team championship was in 1981, making them the last team not named Stanford to hold that trophy. Ultimately, the Bears all but clinched the meet in the morning, putting three swimmers in the A Final of the 200 breast and four in the 200 fly.  Using this as momentum, Dave Durden and company now have another task at hand: winning their third straight NCAA championship.

This is also the first time that we have seen a large contingent from Stanford… well… under-perform at this meet in decades.  With a new coaching staff, it’s clear the Cardinal have shifted their strategy.  What used to be a full taper meet for a majority of the Cardinal now appears to be nothing more than a stepping stone for NCAA’s.  We’ll see if that strategy pays off.

As for tonight’s events, there was a ton of great swimming in what was arguably the fastest session of the meet.

Earlier in the year, Drew Cosgarea and Cristian Quintero engaged in an enthralling 1650 during the Stanford-USC dual meet, where Quintero out-sprinted the Stanford sophomore at the end to win by a tenth in that race.  Tonight, however, Cosgarea brought the closing speed to touch first in 14:49.71, with Quintero 2nd in 14:51.85.  Those two times are 5th and 9th in the country, respectively, meaning that Cosgarea will be in the final heat at NCAA’s.  Barring a scratch, Quintero will be in the middle of the pool in the prior heat.

Quintero, who was runner-up here last year in this event to American record holder Chad La Tourette,  was looking to become the first swimmer to complete the 200-500-1650 sweep at the Pac-10/12 Championships since back in 1978, when John Weston of Washington won all three races.  However, the Pac-10 Championships were split between Northern and Southern divisions back then, and Weston’s times were slower than those swam in the Southern division.  Prior to that, the last person to sweep all three races was in 1972 (Tom McBreen of USC).  (Special thanks to Paul Goldberg for those facts).

Danny Thomson, a freshman from Stanford, actually held the lead in this race over the first 800 yards (splitting low 27’s) before dropping back to 3rd in 15:03.39.  Though slower than his seed, the Illinois native currently sits 26th overall, putting him (at this point) into NCAA’s.  Adam Hinshaw of Cal was close behind in 15:05.96.  The Cal sophomore, who was already qualified for NCAA’s in the 400 IM, will be joined in this event in three weeks by freshman teammate Jamey Lyon, who posted a sub-15-minute swim this morning to jump into the top 20 in this event (14:58.78).  Stanford’s Bryan Offutt, now sans-beard, rounded out of the top 5 in 15:07.75.

In what proved to be the second epic showdown in as many events tonight, David Nolan (1:40.39) closed in a blazing 24.80 to overcome Cal freshman Jacob Pebley and set the Pac-12 meet record in a time of 1:40.39.  Pebley (who finished in 1:40.45) tried to put the field away early, going out in under 49 seconds (48.94).  Though he came in 2nd, the swim itself is a great sign for Pebley; that’s a best time in the event for him, and he was already qualified for NCAA’s coming into this week.  Seeing the way Dave Durden has prepared his swimmers for NCAA’s the last couple years, expect Pebley (along with Nolan, Auburn’s Kyle Owens, Indiana’s Eric Ress, and others) to vie for the NCAA title in this event.

USC’s Alex Lendrum, who finaled in this event at NCAA’s a year ago, was third in a time of 1:42.39.  The All-American senior received a more important distinction tonight; he was also named the 2013 PAC-12 Men’s Swimming and Diving Scholar-Athlete of the Year.  Lendrum, a biochemistry major, holds a 3.76 GPA and has been named to the Pac-12 All-Academic First Team in 2011, 2012, and [likely] 2013.

Marcin Tarczynski, who finished 9th in this event a year ago at  NCAA’s, won the B Final in 1:43.22 for the Bears.

After conserving energy this morning, Vlad Morozov left everything in the pool in the 100 free, torching the field in a time of 41.38.  Not only was it well under the Pac-12 meet record of Nathan Adrian (41.64), that time–a personal best for the USC junior, by the way–makes him the 4th fastest performer of all time (only Cesar Cielo, Adrian, and Matt Grevers have been faster), and just 0.13 slower than Cielo’s SEC meet record of 41.25.  After successfully defending his Pac-12 title in the 50 free on Monday, Morozov’s win tonight marks the 11th straight year the same swimmer has won both sprint freestyle events at this meet.  Of note, he is just the second Trojan to win the 100 free two years in a row here (Erik Ran in 1990-91 was the other).

Stanford’s Aaron Wayne seems to have finally brushed off the cobwebs from earlier this week; he tied his lifetime best time (42.48) to finish 2nd.  Given his performance earlier this week, expect the senior to be swimming with something to prove in Indy.  Jack Wagner of USC touched 3rd in 43.10, jumping into the top 25 nationally in this event.  His teammate Dimitri Colupaev was 4th in 43.26.

Kevin Cordes of Arizona pulled away from Cal’s Trevor Hoyt over the final 50 yards for the win with a time of 1:52.96.  It’s hard to wrap your head around, but that time could be viewed as almost pedestrian for the Wildcat sophomore, who set the American record of 1:50.73 in Austin at AT&T Winter Nationals.  With three more weeks of rest, it will be fun to see how much Cordes can lower the NCAA record (1:51.40 from a suited Neil Versfeld in 2009).  Hoyt (1:53.76) was right with Cordes through the 150 mark before ultimately fading to third (teammate Josh Prenot touched 2nd in 1:53.63).

Notably, this event all but sealed the team victory for Cal.  The Bears outscored the Cardinal by 34 points to extend their lead to an ultimately insurmountable margin.

Tom Shields of Cal used his patented underwaters to help win his third individual title of the meet in a season-best time of 1:41.23.  He’ll be the 2nd seed behind Michigan freshman Dylan Bosch at NCAA’s.  Stanford freshman Tom Kremer finished off his excellent meet in style, out-touching defending NCAA champion Will Hamilton by one one-hundredth of a second, 1:44.54 to 1:44.55.  Hamilton, who was already under 1:43 mid-season, should challenge for the title in this event with three more weeks of preparation.  Kremer’s teammates Gray Umbach and Mack Montgomery finished 4th and 5th, respectively, in 1:44.64 and 1:44.89.

Arizona State’s Alex Coci won the B Final handily in 1:43.72, qualifying for NCAA’s in his 2nd event.  The junior really pushed the front half of the race (he was out in 48.56), and held on to post what is a top-15 time nationally.

USC led the 4×100 relay from start to finish, closing out the meet in dominant fashion.  Thanks to a trio of 42’s from Christian Quintero, Dimitri Colupaev, and Jack Wagner, and a positively-absurd 40.81 anchor leg from Morozov, the Trojans touched in a time of 2:48.66–more than a second faster than the winning time from NCAA’s a year ago.  The development of Wagner is huge for the Trojans, who have been missing a fourth person for their sprint freestyle relays for quite some time.  The relay title gives USC it’s seventh title of the meet, the most swim victories for the Trojans since Jimmy Carter was in the White House (1977).

Stanford–with a 42.0 from Aaron Wayne and three 43.0 legs from David Nolan (leadoff), Andrew Saeta, and Tom Kremer–finished a distant 2nd in 2:51.18.  Given the sub-par performance of their top sprinters this week, putting up a time like that should give the Cardinal confidence that they can challenge USC at NCAA’s.

Cal, needed to only finish legally to clinch the meet, took extra caution on their exchanges in this race, ultimately finishing 5th in 2:55.02

The Bears built a lead over Day 2 and 3 of the meet, and held off Stanford tonight to win the Pac-12 Championship, ending Stanford’s historic 31-year conference winning streak.

Note that the official scores on the results are incorrect, as Noah Garcia is listed as diving for Arizona instead of Stanford. He finished 9th.

Does that mean you think Cal will be first? Because you would do well to not forget about Michigan

do exibition times count towards ncaa qualifying? or how does that work?

Studebaker (200 breast), Lyon (1650), and Tyrrell (1650) all qualified for NCAAs via exhibition swims during Pac-12s. Cox (100 back) qualified yesterday with a time trial. As such, Cal appears to be right at 18 now and that’s without bringing Dillinger and Haney as relay only swimmers. Additionally Pollard and Selby may qualify as divers. Bigger problem for Cal is they don’t have an A cut in the 400 free relay yet.

Cal doesn’t need an A cut in the 400FR. If they have one A cut in any relay they can swim the remainder of their relays that have B cuts.

Where are you finding the exhibition results?

Tyrrell’s 1650 isn’t going to make it. Also Ben Hinshaw is sitting 31st in the 200 IM right now. I don’t think Gimondi has qualified either.

Is Ben already qualified in the 400 IM?

With Mr Durden and Mr Suguiyama in the coaching staff the Cal Bears fans can be happy during many years.