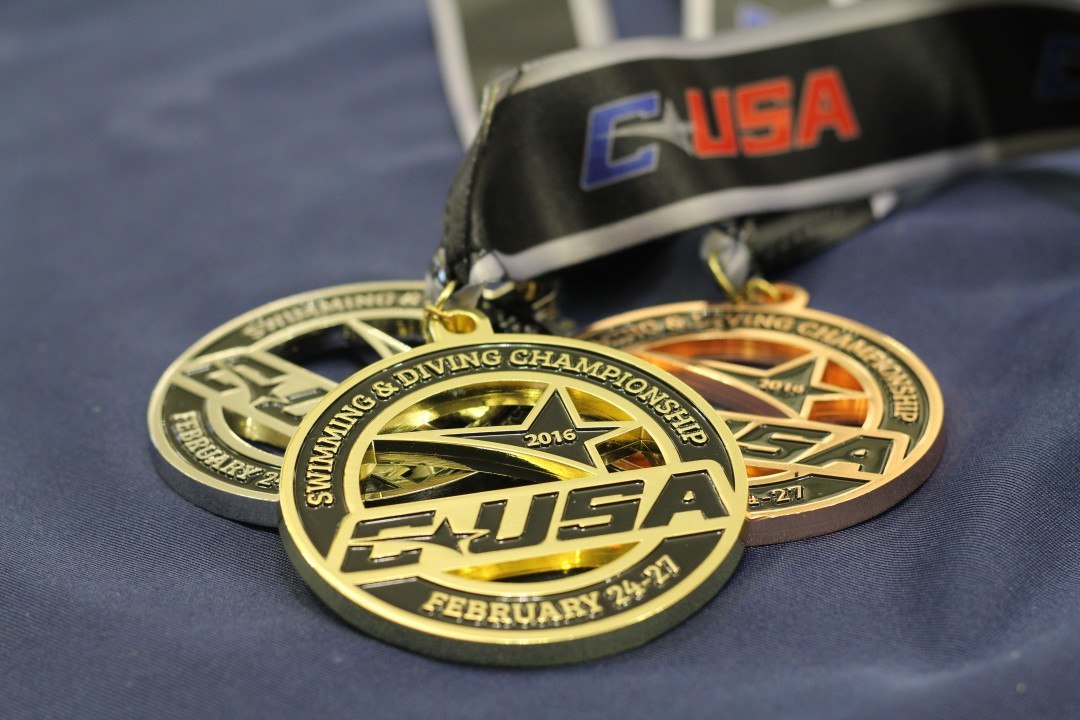 The Women's Conference USA Championship kicked off tonight at Georgia Tech Aquatic Center, where Florida International is looking to repeat after winning their first ever C-USA title in 2015. Current photo via Conference USA

In 2015, Florida International University brought home their first ever Conference USA Championship, capping off an undefeated 10-0 dual meet season and unseating two-time defending champion Rice University by 104 points. Now in his sixth year at the helm, Head Coach Randy Horner is leading a squad with an 8-5 dual meet record for 2016, but is still confident that the Panthers can defend their title.  The 2016 team that looks most likely to be in the hunt are the Rice Owls.  Coach Seth Huston’s ladies traveled to Miami in October to face FIU on their home turf and lost 133-90, but neither team is going to let the first meet of the season determine how they approach this budding rivalry in championship season.

Florida International has lost significant power from last year’s squad, most notably the 2015 Swimmer of the Meet, triple event-winner Johanna Gustafsdottir who has graduated, as well as Karin Tomeckova who is taking a gap year for Olympic prep to represent Slovakia.  They are strong in the sprint freestyles and fly this year, as well as in diving led by Rebecca Quesnel who could not perform at the 2015 C-USA meet due to a concussion suffered at Canadian Nationals prior to the championship. According to the psyche sheet, FIU currently carries the top two seeds in the 50 free with freshman team record holder Naomi Ruele at 22.73 and last year’s Champion in the event Letizia Bertelli behind her at 23.37.  The Panthers also boast Kyna Pereira who carries the top seed for the 200 freestyle (1:48.44) and the mile (16:36.82.)

Rice also lost their only two 2015 event winners, Casey Clark and Erin Flanagan to graduation and have no divers on their roster, but they field a diverse team that should prove to carry a lot of depth. They have the top seed in three of the five relays, with the exceptions being the 400 free relay, in which they are entered just behind FIU, and the 200 free relay which is led by North Texas.  Rice is led by Marie-Claire Schillinger who is tied for the top seed in the 100 breast at 1:02.73 with Sarah Vaisse from North Texas, Alicia Caldwell with the top seeds in both backstroke distances at 54.43 and 1:57.19, Kiley Beall with the top 100 fly (54.46) and Kaitlin Swinney who leads the 400 IM with 4:17.38.

In addition to the relay listed above and Sarah Vaisse’s 100 breast, North Texas owns the top seed in 200 breast by Claudia Kitching (2:13.51,) and the 200 fly (2:01.37) from Carol Culpepper.  They also lead both diving events on scores turned in from freshman Averie Ruiz on 3-meter and senior Jasmine Abercrombie on 1-meter.

Day one of this meet only saw two relays contested, both of which the defending champion Panthers won, giving them an early lead in their quest to bring the Conference USA title home again.

The first race of the 2016 Conference USA Championship was a treat for fans at the McAuley Aquatic Center as it had several lead changes throughout and the results were a complete shake-up of the expected finish based on the psyche sheet.  The FIU squad of Naomi Ruele, Chase Harris, Letizia Bertelli and Jenny Deist combined to take the win at 1:40.60. The Panthers had to claw their way back from fifth place at the half-way mark of the race, but made up ground on the only sub-24 fly split in the heat from Bertelli at 23.77, followed by an outstanding 22.66 freestyle from Deist.  Marshall was the fourth seed coming into the event, but with help from a 22.48 anchor from sophomore Lauren Cowher they were able to sneak past Rice by .03 to take second place on the podium at 1:41.21 to the Owls’ 1:41.24.  Old Dominion was just shy of making the podium with 1:41.47.  North Texas, who was in the lead by just over a second at the 100 mark with the help of Sarah Vaisse’s blazing 27.75 breaststroke split, finished in 5th place.  Florida Atlantic closed the A-final in 6th with 1:42.27.

Team scores after day one: