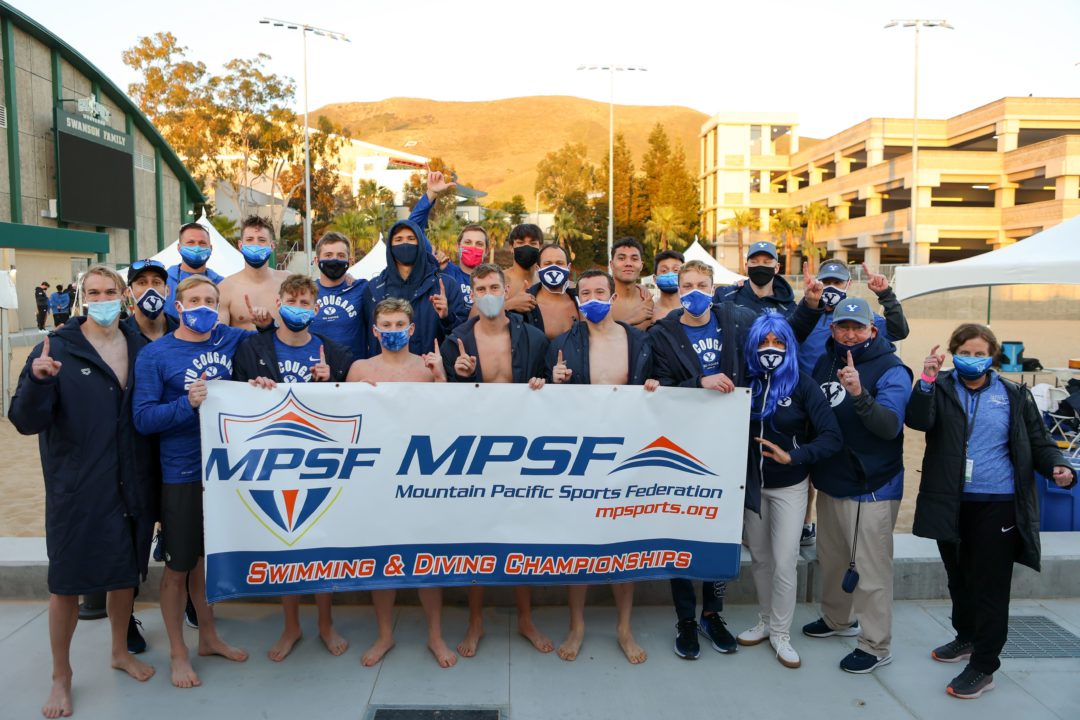 BYU men won the MPSF Championship title for the first time in five years. Their margin of victory was extended today by two individual wins and one relay win. Current photo via Kyle Calzia / MPSF

The Cougars’ lead wasn’t solidified until today. They ended Friday’s finals session with a 64 point lead over Hawaii – the equivalent of just over 3 first place finishes in individual races or a relay win alongside an individual win. But when BYU wins, BYU wins big. The Cougars ended the meet by doubling that lead, creating a margin of victory of 135 points over Hawaii.

This was also a personal best for Adam who split a 43.78 on a relay at last year’s MPSF Championships. His teammate, Tim Masten, was also enveloped by the BYU pack, placing 4th with a time of 44.51. 4th through 6th place were decided by .04.

In the 200 breast, UCSB’s Alec Cullen claimed victory for the Gauchos with a time of 1:55.41. He broke his own MPSF Championship record which he set last year by one-third of a second. BYU junior Josue Dominguez, who broke the BYU school record in the 100 breast on Friday, touched the wall 2nd (1:56.71). This was a slight add for Dominguez who posted his lifetime best, 1:55.97, at the 2019 Mizzou Invite.

BYU pulled a 1-2 finish in the 200 butterfly led by Brad Prolo (1:44.16) who was followed by Javier Nicolas (1:45.96). With this swim, Prolo broke the longest-standing MPSF Championship record which was set in 2013. He crushed his previous lifetime best, set last month, by 2 seconds. Half a second behind was Dominic Falcon from USCB. Nicolas shaved .11 from his personal best from the 2019 Mizzou Invite while Falcon also snuck under his best time from last season’s MPSF Championships by about .20.

Hawaii and BYU had a showdown in the 400 freestyle relay, ultimately resulting in BYU’s relay of Woods, Brigham Harrison, Nicolas, and Connor Stirling claiming victory with a time of 2:56.48, about 1.3 seconds ahead of the ‘Bows. BYU started off with a strong lead, then Hawaii made up some ground on the 3rd leg where Gallagher outsplit Nicolas by nearly .30. But, it wasn’t enough to catch the Cougars.