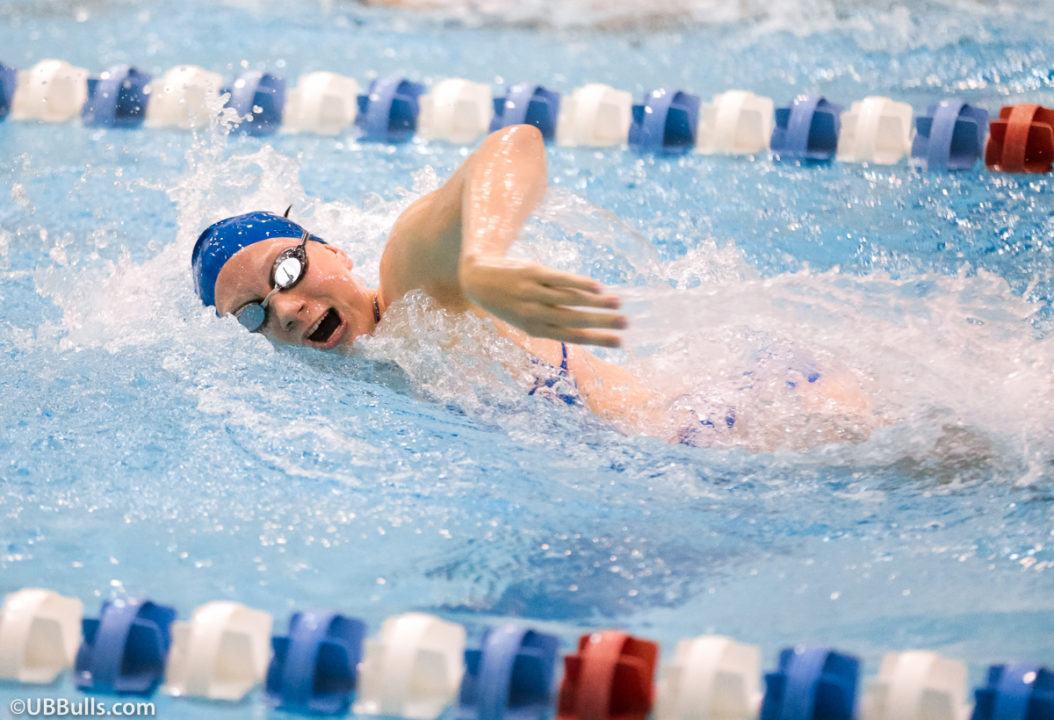 Buffalo and Cleveland State’s women’s teams faced off in a sprint-style dual meet to close out both teams’ regular seasons. Buffalo won all 15 events in the meet, with 3 triple event winners.

Both the MAC championship and Horizon League Championship will be held Febraury 21-24th.

BUFFALO, NY – The University at Buffalo women’s swimming & diving team (8-0, 4-0 MAC) closed out their regular season with an unblemished dual meet record, 8-0, as they downed the visiting Cleveland State Vikings, 223-58, on Senior Day at Alumni Arena Natatorium. Buffalo finished off the regular season with an 8-0 dual meet record, marking the first time in program history the Bulls have went undefeated during the dual meet season.

The Bulls were able to claim victories in all 16 events on Senior Day in front of the home fans.

Freshman Nicole Roitenberg continued to swim well for the Bulls on Saturday as she was able to collect three wins, two individual and one relay. She opened the day as the opening leg of the Bulls 200 yard medley relay team that won the event in 1:45.62. Roitenberg then collected a strong win in the 50 backstroke as she won the event by over a second, finishing in a season-best 26.80 seconds. The freshman then finished off her afternoon with the victory in the 100 backstroke in 56.60 seconds.

Senior Megan Burns closed out her impressive career at the Alumni Arena Natatorium with two more victories as she dominated the field in the 50 and 100 freestyle. In the 50 freestyle, Burns touched the wall in 23.22 seconds as she beat fellow Bull Eve Kosten by under a second. In the 100 freestyle, the senior won by nearly two seconds as she finished in 50.76 seconds.

Senior Hannah Miller collected a victory in the 300 freestyle as she posted a time of 2:56.16 while Anna Vitolins earned the win in the 100 breaststroke in 1:06.04. Freshman Sydnie Sovinsky won the 100 butterfly in 57.53 seconds while Grace Baumer won the 50 breaststroke in 30.15 seconds. Reigning UB Athlete of the Week Andrea Ernst was able to post a victory in the 200 freestyle in a season-best time of 1:51.97.

The 200 freestyle relay squad of Kathryn Burns, Jillian Lawton, Kerry Giovanniello and Jenna Krull posted a first place finish in the final race of the day, winning in 1:37.82. Finishing just under a second later, the team of Catherine Schultheis, Sydnie Sovinsky, Maddy Jacumski and Andrea Ernst earned a second place finish in 1:38.53.

In the diving well, Kelly Moran continued to lead the way for the Bulls as she collected the victories in the 3 meter dive and 1 meter dive. In the 3 meter dive, Moran posted a season-best score of 325.80 while Journi Northorp took home second place with a season-best score of 255.45. Olivia Gosselin and Isobel Holcomb came in third and fourth respectively. In the 1 meter dive, Moran once again came away victorious as she posted a score of 276.83 while Northorp, Holcomb and Gosselin came in right behind the senior.

UB will now be off until February 21 when they begin the Mid-American Conference Championships at Ohio. The championships will go from February 21-24.

Marinelli was the runner-up in the 300 freestyle in 2:59.49 and took fourth of seven in the 50 freestyle in 24.85 seconds. She also swam the lead leg on CSU’s top-placing 200 freestyle relay and was followed by juniors Ashleigh Bennett and Cassandra Oltman and senior Jamie VanDewerker.

I think SwimSwam should always use some type of footnote or other notation to identify schools that have dropped their men’s swim program. Give kudos to the ladies but remind everyone of the poor decisions by the athletic department.

Buffalo is looking great heading into MACs. I don’t know where they’ll finish but im guessing top 3. Bottom three is a fight between Ohio U, Toledo and Ball State. Maybe Ball State gets the better of the bobcats??

I agree with you except I would make it 2-5 and put BGSU in there. They looked really good in their last meet, and although they probably rested some for it, it was still impressive. They also have a few freshmen who I think will come in big for them at MACs.