In the 2nd-to-last WISCA poll of the boys season, Madison West has extended its lead over Waukesha South-Catholic Memorial by 95 points, bring their total lead to 182 points in the Division 1 poll. Stock photo via WISCA

In the 2nd-to-last WISCA poll of the boys season, Madison West has extended its lead over Waukesha South-Catholic Memorial by 95 points, bring their total lead to 182 points in the Division 1 poll. The move resulted from a combination of Madison West picking up a large amount of points this week Waukesha South-Catholic Memorial dropping by about 10 points. Another noteable change in the D1 poll is Madison Memorial‘s rise from 6th to 3rd.

In the Division 2 poll, Monona Grove‘s lead was cut into very slightly. While there was not a whole lot of movement, Lakeland bumped up one spot to 3rd place, and Plymouth cracked the top 10, going up 3 to make it to 8th.

The overall lack of big movement isn’t that surprising given last week was mostly conference meets. As experienced high school swimmers and avid high school swimming fans know, in states where conference meets are held very close to sectionals/regionals meets, they tend to be some of the slowest meets of the season, at least generally speaking. That tends to be the case because the swimmers are at one of, if not the most, tired points of the season, as they prepare to taper.

This weekend’s sectionals will answer (or at least clear up) an essentially season-long question: How sturdy are Madison West‘s and Monona Grove‘s leads in their divisions? Up to this point in the season, the answer seems to be that they have extremely solid leads over their competition, but rest and tapers can change a lot, so it’s not inconceivable that their leads aren’t as safe as they seem. 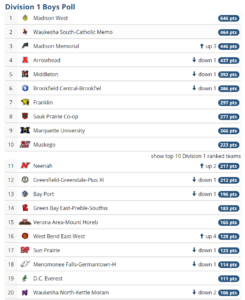 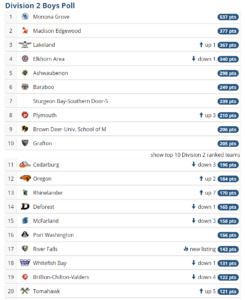