Emily McClellan broke two school records and put up the third-fastest 100 breaststroke time in the nation for UW-Milwaukee. Archive photo via Tim Binning/TheSwimPictures.com 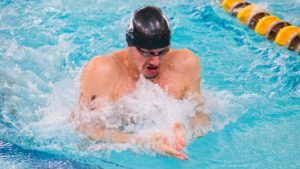 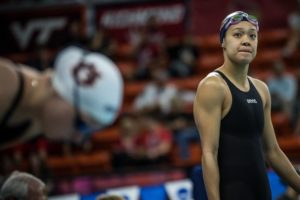 Two of the best female breaststrokers in the NCAA tangled at the Iowa Hawkeye Invite, with UW-Milwaukee senior Emily McClellan winning the 100, Notre Dame junior Emma Reaney taking the 200 and both breaking school records and putting up top-5 NCAA times in the process.

McClellan was the 100 breast champ on Friday night, shocking the NCAA with a 58.76 that would have been number one in the nation entering the weekend. As is, McClellan trails only defending NCAA champ Breeja Larson of Texas A&M and last year’s runner-up, Kasey Carlson of USC. Those two were competing cross-country with Larson at Winter Nationals in Tennessee and Carlson at the Texas Invite in Austin when McClellan blew things up in Iowa to make it a three-person, three-meet race for the NCAA lead.

Reaney struck back on Saturday, though, avenging her 100 breast loss to top McClellan in the 200, going 2:05.85 – the top time in the nation, faster even than the collegiate fields at Winter Nationals and the Texas Invite. The Notre Dame junior had to swim past McClellan over the final 50 to take the win and break the Irish school record.

McClellan broke UWM school records in both events, and it should be noted that both McClellan and Reaney are within 1.5 seconds of the American records in those events.

Notre Dame won both 200 free relays to open the meet, both of them by just a tenth. The women’s relay of Christen McDonough, Kelly Ryan, Catherine Galletti and Emma Reaney went 1:31.55 to just beat out Washington State’s 1:31.66. That relay included a 22.4 split from Ryan and a 22.5 from Reaney. Washington State broke a school record in the event while finishing second. The Irish men went 1:20.16 to beat Iowa’s 1:20.16 – the team of Zach Stephens, Frank Dyer, Colin Babcock and Kevin Bradley were powered by Dyer’s 19.4

Emma Reaney won the first battle with Emily McClellan in the duo’s only non-breaststroke event, the 200 IM. Reaney went 1:55.65, safely ahead of McClellan, who broke a UWM school record in 1:57.14. Two Irish men tied for the 200 IM championship, senior Colin Babcock and junior Zach Stephens. Both went 1:46.48, but Stephens got full control over the school record this weekend by going 1:44.34 in the preliminaries.

Denver got another school record from Samantha Corea, who won the 50 free by the slimmest of margins, going 22.82 to beat Boise State freshman Katelyn Martin’s 22.83. The men’s meet featured a second consecutive tie between teammates, with Iowa’s Gianni Sesto and Jackson Allen both going 20.47 in an event where Iowa swept 7 of the top 8 spots and 12 of the top 16. The event would have been a mind-boggling three-way tie if Iowa sophomore Charles Holliday had gone .01 faster – he was 20.48 for third.

Notre Dame’s Allison Casareto won the women’s 1-meter diving with a score of 302.55 while the men competed on 3-meter, with fellow Irish diver Joseph Coumos picking up the win in 398.20.

Notre Dame also took the 400 medley relays, with the team of Katelyn Miller, Emma Reaney, Courtney White and Kelly Ryan winning in 3:36.84. The men’s relay of Bogac Ayhan, Cameron Miller, Frank Dyer and Zachary Stephens broke a school record, going 3:11.15 to just beat out Iowa for the second time in the same meet. Iowa was 3:11.38. In addition, Ayhan broke an Irish record in the 100 backstroke leading the relay off; he went 47.80.

Katelyn Miller came off that relay win to also take the 400 IM for the Fighting Irish, going 4:12.06. On the men’s side, Notre Dame freshman Tom Anderson broke a school record for the second time that day, going 3:46.22 to blow away his own school record of 3:50.73 set at prelims. Denver’s Jeremiah Zgliczynski took second in 3:47.07, a Pioneers school record.

Samantha Corea kept the good swims coming for Denver, breaking a Pioneer record in the second straight event and winning the 100 fly in 52.72. Junior Jonathan Williamson went 47.84 in the prelims for Notre Dame, and he held on to win the A final at night by just .01, going 47.94 over Denver senior Kyle Milberg’s 47.95.

Next was the big-time breaststroke showdown where Emily McClellan went a lifetime-best and UWM school record 58.76 to top Emma Reaney’s 59.22. Those times now rank 3rd and 6th in the NCAA, respectively.

Notre Dame’s Zachary Stephens won the men’s 100 breast, going 53.24. Behind him was Andrew Marciniak, who tied his own Iowa Hawkeye school record. Denver’s Tanner Krall broke a school record in the prelims, going 54.37. He finished 7th at night.

The session closed with the 800 free relays. Boise State blew by the field to win for the women, going 7:17.85 thanks to Felicity Cann’s 1:48.6 split and Taylor Padington’s 1:48.37. Blake Balogh and Samantha Wicks were also a part of the relay. Notre Dame remained perfect in the relays on the men’s side, taking its fourth relay event in 6:32.15. Frank Dyer was 1:36.57 leading off, and the relay continued with Kevin Hughes, Tom Anderson and Colin Babcock.

Before the session started, Notre Dame’s Frank Dyer time trialed a 100 fly, breaking the Irish school record and going an impressive 46.92. That’s the 9th event that Dyer now holds a school record in for Notre Dame.

Denver went on an amazing run to open Saturday’s session, winning 4 straight events and going 1-2 twice in a row.

The session officially kicked off with the fastest heats of the 1650s. Denver freshman Clara Jenck won for the women, going 16:31.88, and her teammate Tyra Rooney completed the 1-2 sweep for the Pioneers by going 16:43.88 for second. Dylan Bunch also won for Denver in a very fast 14:54.60 and Jeremiah Zgliczynski followed him in to give the Pioneers another 1-2 finish.

Denver stayed hot through the next event, with Sam Corea winning yet another race. The junior went 1:53.78 to win the 200 back over Notre Dame’s Kelly Ryan. Senior Kyle Milberg kept things rolling for the Pioneers, winning the men’s race in 1:43.15, just .8 ahead of Iowa’s Dustin Rhoads.

Nebraska picked up a tight win in the women’s 100 free, with sophomore Taryn Collura going 50.03 to just beat out Iowa’s Olivia Kabacinski. Kabacinski, a sophomore herself, did break the Hawkeye school record in the preliminaries, going 49.84 for the first sub-50 second 100 free in school history. David Ernstsson took the men’s 100 free, going 44.72 over teammate Gianni Sesto’s 44.84. The Hawkeyes were once again dominant in a sprint race, going 1-2-3-4.

That led into the women’s 200 breast, where Emma Reaney avenged her 100 breast loss by powering past UWM’s Emily McClellan over the final 50 yards to go 2:05.85. That’s the top time in the country by almost a full second, and would have beaten everyone at U.S. Winter Nationals (swimming at the same time in Knoxville, TN) except 2012 Jamaican Olympian Alia Atkinson’s 2:05.63 prelims swim. McClellan was 2:06.78, which will rank her 4th in the NCAA this year. Both times were school records for the women.

Boise State took the women’s 400 free relay to end the meet, going 3:20.35. The relay was made up of Brittany Aoyama, Katelyn Martin, Jessica Bottelberghe and Samantha Wicks, with Bottelberghe and Wicks going 49s on their splits. Denver broke a school record from third place, with the team of Samantha Corea, Bridgette McNally, Johanna Roas and Catherine Galetti going 3:20.55.

The Irish men completed their sweep of the relays by winning the 400 free relay in 2:56.89. Frank Dyer led off in 44.03, Colin Babcock and Trent Jackson continued with the lead and Zachary Stephens anchored in 43.8 for Notre Dame.

It’s no surprise, then, that Notre Dame took titles on both sides. The men won by almost 300 while the women ended up with an 80-point margin.