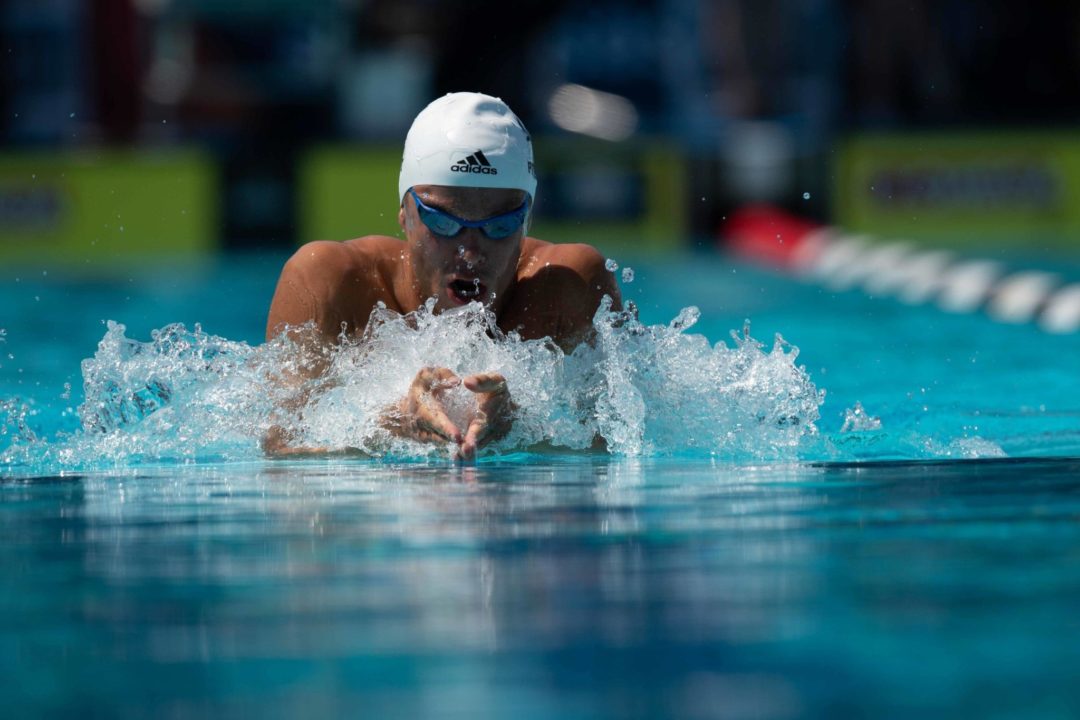 Master the breaststroke with these seven tips for improving breaststroke technique from some of the best breaststrokers on the planet. Current photo via Mike Lewis/Ola Vista Photography

Things we are going to look at include:

Let’s dive right into this list of tips for improving your breaststroke.

1. Use a narrow and powerful kick

Unlike the other swimming strokes, the breaststroke gets most of its propulsion from the leg action.

Adam Peaty, the fastest breaststroker on the planet, figures the kick is 70% of the speed he generates in the water. He focuses on keeping his legs and the kick narrow to reduce drag as much as possible.

“Most people have a wide, slow kick, but mine is narrow and fast,” says Peaty. “If you can keep the top half of your legs, your quads, quite narrow and whip your lower legs back, you’re more streamlined, so I can generate more power without exposing myself to drag.”

How narrow should your kick be?

Nort Thornton, legendary Cal coach who has worked with countless elite breaststrokers over the years, has these positioning cues for a killer breaststroke kick:

In the same way that novice breaststrokers can kick too wide, creating extra drag, the same thing happens with the breaststroke pulling motion.

An extra wide pull results in the elbows coming back behind the shoulders during the recovery, causing the body to become upright in the water.

“The number one mistake that I see young breaststrokers make is their tendency to pull too deep and wide,” says Mike Barrowman, Olympic gold medalist and former 200-meter breaststroke world record holder. “They are getting their elbows all the way back against the body, which creates massive resistance in the recovery phase.”

3. Swim in a straight line

In breaststroke, you really get a sense of how much of a battle you are engaged in with the water. Slight adjustments—raise your hips a little here, recover your arms a little faster there—can create exceptional improvements in your efficiency.

Sergio Lopez, an Olympic bronze medalist in the 200-meter breaststroke, notes that swimming in a straight line “is what breaststroke is all about.”

And one way to do this is to hold your breath during the glide to provide buoyancy.

Lopez suggests exhaling right before you pick up your head to take a breath, keeping your body position high and your line “straight” in the water.

“Hold your breath until the last moment,” says Lopez. “This will keep the center of gravity closer to the surface and will keep speed constant.”

The turns are an important part of your breaststroke swimming. The momentum you take with you into the wall, the speed with which you turn, and the power you unleash on your push-off, all combine to help you swim faster, or slower.

Josh Prenot, NCAA champion and silver medalist in the 200-meter breaststroke, advises that swimmers focus on going in and out of the walls quickly.

“I think the actual act of just the turn, just hand-touch to foot-leave, is overlooked by swimmers,” says Prenot. “I think it’s something that really isn’t that hard to get better at, and it can help you make up a lot of ground really quickly. It’s a really easy way to drop a lot of time.”

Prenot recommends swiveling the hips with your abs to get your feet to the wall. If you can do this before breathing, “you can get off the wall much faster.”

When executing the turn, avoid the urge to pull yourself up, instead of going in and out of wall, as flat as possible.

“You want to get in there and out as fast as possible, so keep a low profile in the water and resist the urge to pull up!” says Anita Nall-Richesson, an Olympic gold, silver, and bronze medalist (and former world record holder in the 200-meter breaststroke).

5. Find the dead spots in your pull-outs

The start and the push-offs are the fastest you will ever go in the water. Unlike the other strokes, which feature a lot of underwater dolphin kicking, breaststrokers can perform a single-arm pull-out and one dolphin kick per dive/turn. Maximizing speed and power through this part of your race is essential.

“You’re never as fast on top of the water as you are when you’re underwater,” notes Emma Reaney, NCAA champion in the 200-yard breaststroke. “Make sure you have as strong of a pull and kick as you can while maintaining the speed from your push off.”

Poor breaststroke pullout technique creates a ton of unnecessary drag and can stop you dead in your tracks. Most often, swimmers stall between the time they are recovering their arms and kicking themselves into the breakout.

One way to over-emphasize the dead spots in your pullout is by using resistance bands or a swim parachute. The added resistance will highlight the gaps in speed during your pullout.

6. Use windshield wiper drill to help power the catch

The drill is simple enough—float on your belly, and out-sweep your hands to teach a better feel for the water and a “fuller” catch.

“As far as breaststroke technique, windshield wiper scull has really helped my catch,” says Reaney. “Scull on your stomach, bend your elbows at an almost 90-degree angle, and sweep your forearms back and forth to simulate the breaststroke catch.”

Mike Alexandrov, a two-time Olympian, and US Open record holder, also references the windshield wiper drill as his favorite.

“Try to work on balance and keeping the feet up by tightening the body’s back core muscles,” notes Alexandrov. “The main part of the drill is to work on the out-sweep of the forearms, and then float the forearms back together in front of you.”

It’s no secret that the fastest swimmers in the pool are also the most efficient swimmers.

Russian breaststroker Anton Chupkov is a prime example of this. At the 2019 World Championships in South Korea, Chupkov broke the world record in the 200-meter breaststroke in a time of 2:06.12.

Simply moving your arms faster doesn’t always make you a faster swimmer. When you hit the water, count your strokes and work on maintaining distance per stroke under fatigue.

Being mindful of keeping your stroke long will help you prevent spinning out towards the end of your races and hard sets.

“It’s not uncommon for swimmers to start ‘spinning’ or feeling like they aren’t pulling any water when they get tired. Maintaining good distance per stroke can prevent this,” says US National teamer Gunnar Bentz.

Get into the habit of counting your strokes at your next swim workout. It will put you into a mindset of taking engaged, efficient strokes, helping you swim more efficiently, and helping you keep your stroke together when things get tough.

Take Your Swim Workouts to the Next Level

I think I’ll stick to freestyle!

Great article, as usual, Olivier. I will add 3 that I find very important to make it 10:

#2… there was an analysis on here that showed peaty has the longest glide of his sprint competitors, and chupkov glides so much it looks like he’s doing a drill his first 100-150

Pretty sure it is as a percentage he spends the largest proportion of his stroke gliding.

He still glides less than his competitors who are doing significantly less strokes at a slower speed in terms of time within each stroke, just not proportionally.

Gliding is optional, however – “You’re never as fast on top of the water as you are when you’re underwater,” notes Emma Reaney, NCAA champion in the 200-yard breaststroke.