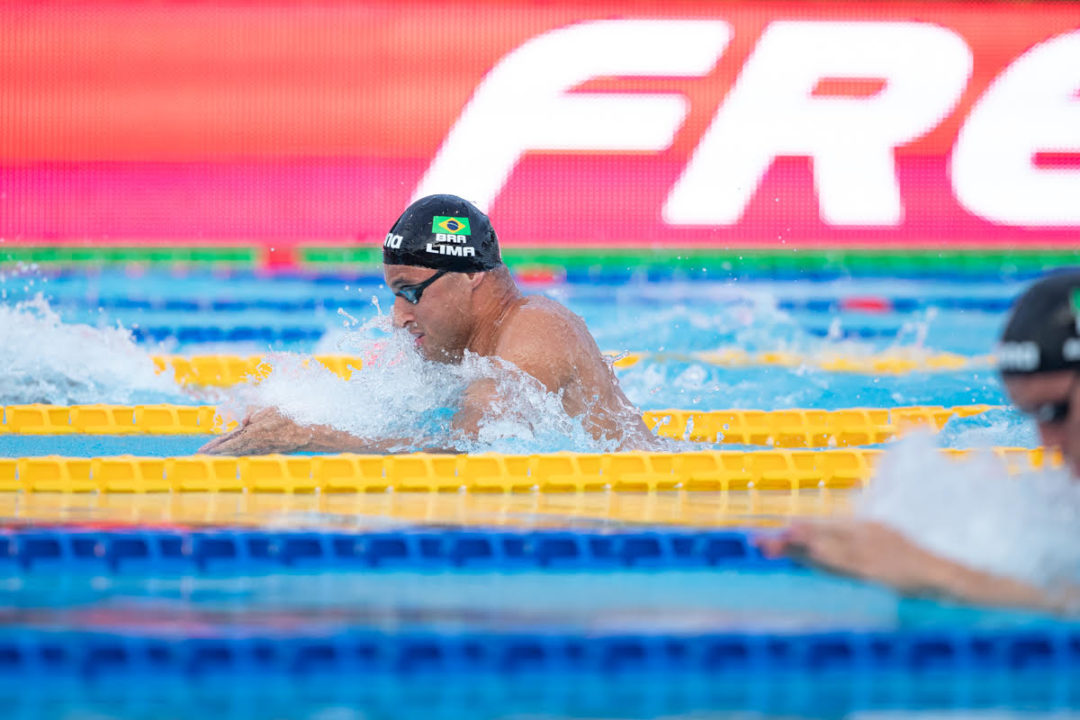 Felipe Lima will lead the field into the finals of the 100 breast, having produced the only swim faster than a minute during the prelims. Archive photo via “Rafael/Domeyko Photography”

Brazil’s 6 day Olympic Trials selection meet began on Monday, April 19 with the men’s 100 breast, women’s 100 fly, men’s 400 free, and men’s and women’s 400 IM. As swimmers head into the finals, it will take a top 2 finish and a time under the FINA A standard in order to earn consideration for the Olympic squad.

The men’s 100 breast was among the most successful events for Brazil at Rio 2016, having placed two men in the final with João Luiz Gomes Júnior placing 5th and Felipe Silva earning 7th. The two were in the water at 2021 Trials to contest the event but neither will be the top seed heading into the final as Felipe Lima was the fastest in the field, posting a 59.74. That was the only swim under a minute during the prelims and it was also under the FINA A standard of 59.93 which is required for Olympic consideration.

While Lima leads the way into finals, both Gomes and Silva follow closely with a 1:00.06 and 1:00.55, respectively, and have each been faster than the selection cut before considering Silva’s national record in the event of 59.01 and Gomes’ PB of 59.24 in the event. Adding to action, Caio Pumputis actually out-swam Silva in the prelims with a 1:00.11 for third seed while Pedro Cardona was a 1:00.71 for 5th.

Having the top 5 entrants separated by less than a second heading into a 100 final will surely make for an exhilarating race as they fight for a spot in the top 2. Considering the prelims speed, we could very well see more than 2 swimmers hit the FINA A during the final meaning that more would be under the selection cut than make the team.

The men’s 100 breast represented the only prelims event where any swimmer managed to get under the FINA standard. In the women’s 100 fly, Clarissa Rodrigues was the closest to the mark, swimming a 59.43 which is roughly a second and a half slower than the required 57.92. She was a bit slower than her entry time in the event of 59.32 but will still need to pull off a decent PB in the final in order to secure a spot on the Olympic team. She’ll be joined in the final by Daynara Paula and Giovanna Diamante who were not far off during the heats, swimming a 59.53 and 59.72, respectively.

The biggest threat in this event, however, will be 4th seed from the prelims Guilherme Costa who swam a 3:53.86 despite holding the Brazilian record which he set back in 2019 at a 3:46.57. That’s under the selection by just 0.21 seconds which means it will take a near-national record or better to qualify for the team.

Scheffer PB on 400 free is incorrect.