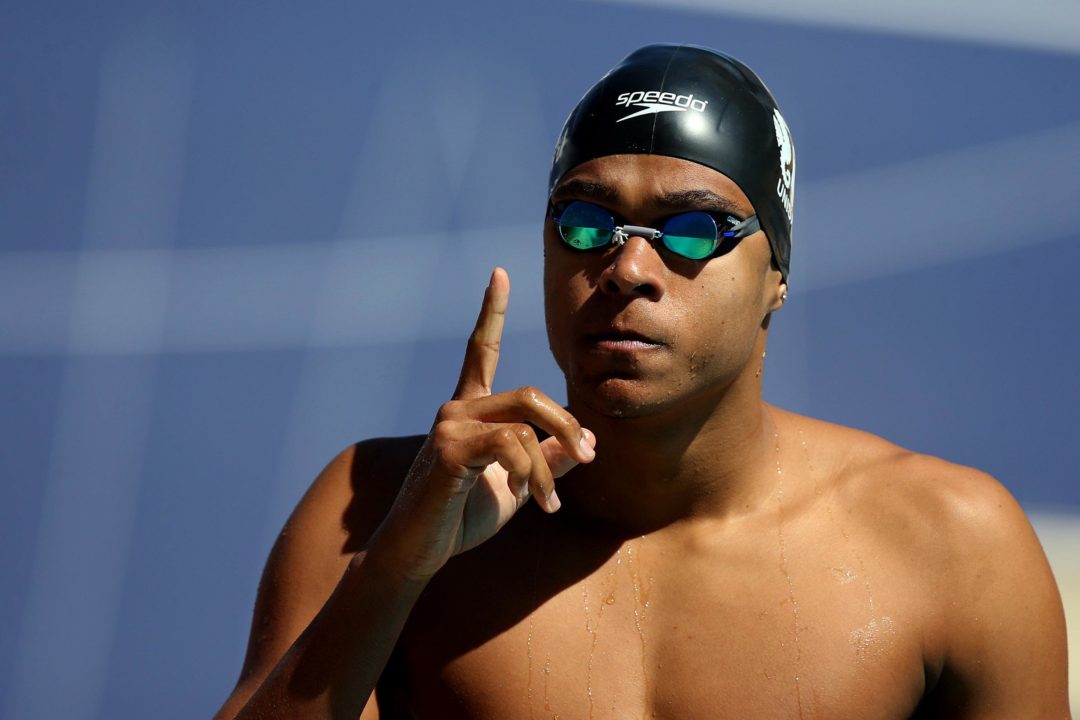 The Brazilian team just released their roster for the South American Swimming Championships which will take place in Mar Del... Current photo via Satiro Sodre/SSPress

The Brazilian team just released their roster for the South American Swimming Championships which will take place in Mar Del Plata, Argentina starting in early October of this year.

The team consists of a total of 28 swimmers, 14 men and 14 women, who will be representing Brazil at this meet. Some big names are on the roster including Matheus Santana and Filipe França Silva.

Santana is going to be one of the big stories of the championships as he’s been on fire as of late in the sprint freestyles which are his speciality. He’s currently coming off an amazing 2013-2014 season which could be capped off with an amazing start in the 2014-2015 one.

This year he had some big international results which included a gold medal in the 100m freestyle at the South American Games along with stellar performances at the Youth Olympic Games in Nanjing, China. The Brazilian sprinter came home with a gold in the 100m freestyle and a silver in the 50, not to mention medals for relays at the Youth Olympic Games.

At the Youth Olympic Games Santana was a 48.25 to break the junior world record, a time which ranked him 7th in the world for the 2013-2014 season.

There’s no doubt that Santana has speed and that with age he’s continued to improve himself and work towards swimming on the world scene, but the standard for Brazilian sprinting is extremely high following the success they’ve had over the last few years.

With swimmers such as Cesar Cielo and Bruno Fratus, it’s hard for a young swimmer to even imagine representing Brazil internationally in the sprint freestyles considering that they’d have to get past two of the top swimmers in the world in order to do so. Throw Joao De Lucca into the mix and it’s not an easy field to break into.

This meet however could be the chance for Santana to truly establish himself and put himself into the same category as some of these sprinting stars. Cielo’s only been a 48.13 this season, just over a tenth faster than what Santana has been. With a gold here and the possibility for him to swim a faster time than Cielo did all season, he could truly be breaking onto not just only the Brazilian sprint scene, but the international one to.

Will Santana go pro or is he considering US colleges?

I didn’t realize there was a South American Games at all, but when you add in the Brazilian Championships (Maria Lenk?), where they need to swim well to qualify for international teams, the Pan Pac’s which is really the most prestigious meet of the bunch, AND the South American Swimming Championships, not to mention the Brazilian Short-Course Championships which were just held to qualify swimmers for the World Championships in December and throw the YOG on top, wow, my hand is cramping just typing all that! As much as I’d love all those meets as a fan, you could never settle into any long-term training like so many coaches here in the US like to do. I guess it’s a… Read more »

Danjohnrob,
unfortunately, Brazil is the country with more swimming champs in the World(13, yes thirteen!).
It was criticized(sory, it is in portuguese): http://www.bestswimming.com.br/2013/2014/09/16/editorial-quando-o-mais-e-demais-ou-cada-vez-menos/

CBDA dont consider PanPacs too much.And SA champs is more or less about national pride, but Brazil will win without much worry.Cielo will be going to Dubai because is a “World” champ and he is in a experimentation phase, what he will not do next year.

For santana future, he told after Maria Lenk he is happy on Unisanta.. but i think he should take some shot to improve his starts.. with a Cielo level start he could be 47 already..

Dont expect a very fast time for Santana in SA champs.He is training for Open Tournament(in December) to get a place in Kazan and his first sub-48 seconds swim.