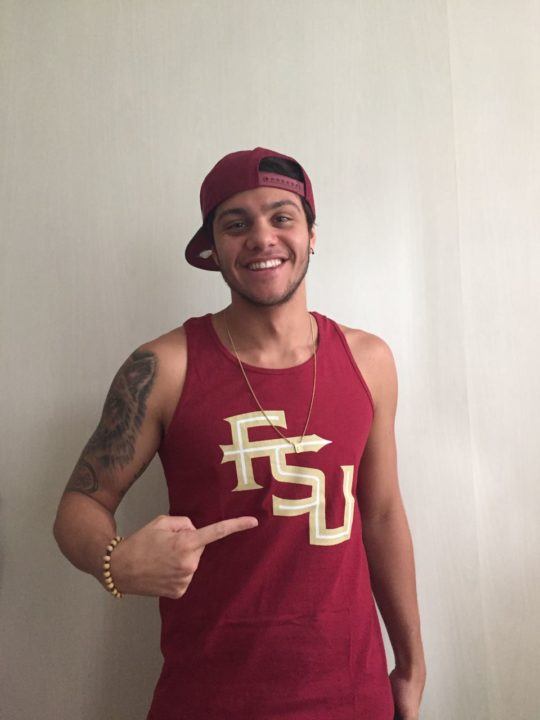 Ribeiro, one of the brightest young talents for the proud sprinting nation, had already announced last month his intent to join a training program in the United States. This week, he confirmed to SwimSwam that Tallahassee, Florida and Florida State University would be his chosen destination.

“I chose FSU because I really liked the environment, the coaches, the team and the facilities,” Ribeiro said. “I am sure that is the right place for me to spend my next 4 years. I can’t wait to be a Seminole.”

Ribeiro, who is still 18 years old, is one of the world’s best junior sprinters. In 2015, he was the bronze medalist in the 100 free at Junior Worlds, finishing only behind American Maxime Rooney (ranked as the #1 domestic recruit in his class) and eventual Olympic champ Kyle Chalmers of Australia.

He holds lifetime-bests that should make him a massive sprint free contributor right out the gate, though of course that’s all dependent on how well he can adapt to the NCAA’s short course yards format.

Ribeiro joins a Florida State program that is just beginning its first year under new head coach Neal Studd. There’s no word yet on when Ribeiro will be eligible to start competing, but last month, Ribeiro made clear he plans to start his next training cycle in the United States.

Dude looks like he hasn’t lifted much in the past…lots of potential.

A speed demon signs with the ‘Noles!! Scalp ’em!!!

Fantastic pick up FSU! So excited to see what the future holds for this program!

Could have been a great NC State commit 😉

Cause they have money left on the table…

Could have been a great commit anywhere, but it looks like he chose FSU for a reason.

Chances are Ozzie had a lot to do with this

Excited to see what he is going to do in the short pool! Congrats Felipe!