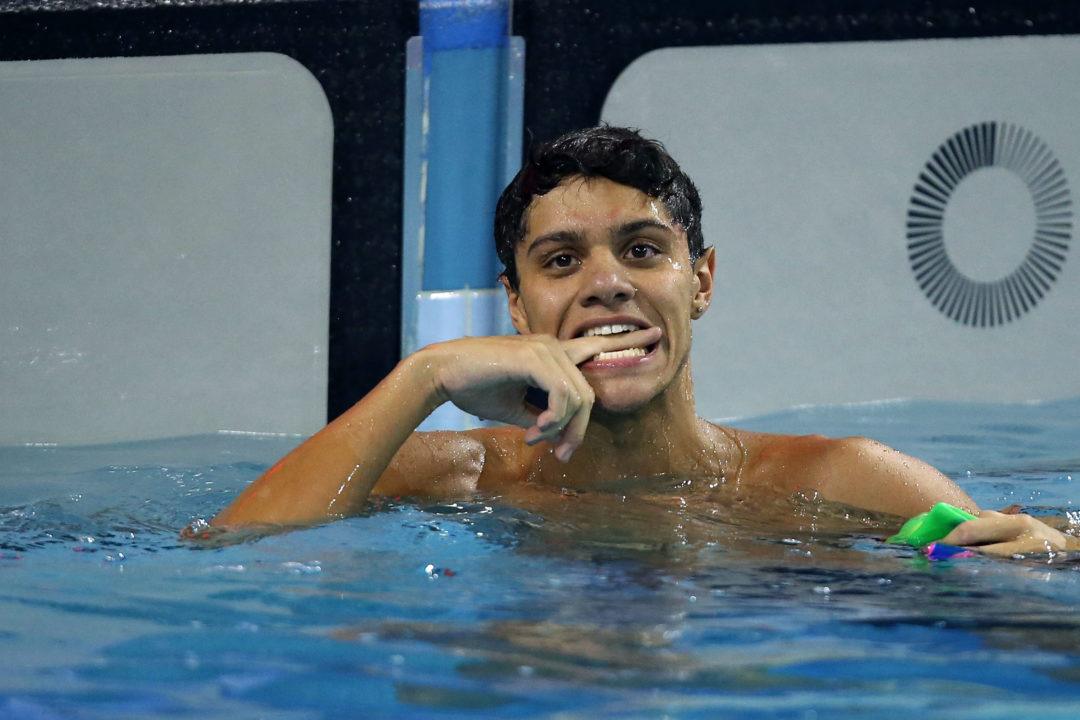 One of Brazil’s best young sprinters is considering an NCAA pathway in the next year, according to an interview with...

One of Brazil’s best young sprinters is considering an NCAA pathway in the next year, according to an interview with globoesporte.

Speaking with Joao Paul de Castro at this week’s Jose Finkel Trophy (the Brazilian Short Course National Championship meet), Felipe Ribeiro says that he will “definitely have his next training cycle in the United States.”

Ribeiro says that he has been contacted by multiple universities, but that nothing has been closed so far.

The 18-year old Unisanta sprinter, a training partner of one of the country’s other young talents Matheus Santana, placed 5th in the 200 free in his first race of the meet.

Ribeiro (oft listed as “Felipe Souza”) was 3rd at last year’s World Junior Championships in the 100 free, placing behind only American Maxime Rooney and Australian Kyle Chalmers. Chalmers progressed a year later to win the Olympic title in the 100 free as still a teenager.

Many of Brazil’s best swimmers, most recently on the men’s side, have come through the American collegiate system:

Auburn and head coach Brett Hawke have been a popular spot for Brazilian swimmers over the last decade both within and outside of the NCAA system. Ribeiro, however, didn’t mention any specific programs he’s considering in the interview.

Based of his times, should come to NC STATE!

Word on the street is that NC State is done with sprinters for this class. Between the 22.0 LC in Giovanni and the 20.1 out of Arizona they have a few stud sprinters. They’ll be shifting their views to distance and IM…but then again who would pass up on a 22.5 and 49.1 sprinter.

Watch out for IU on this one! Having great success with flyer Vini Lanza!

Looking like this guy is leaning the GATOR way.