Bonnet Sweeps Freestyle, Fratus With Another Sub-22 In Chartres 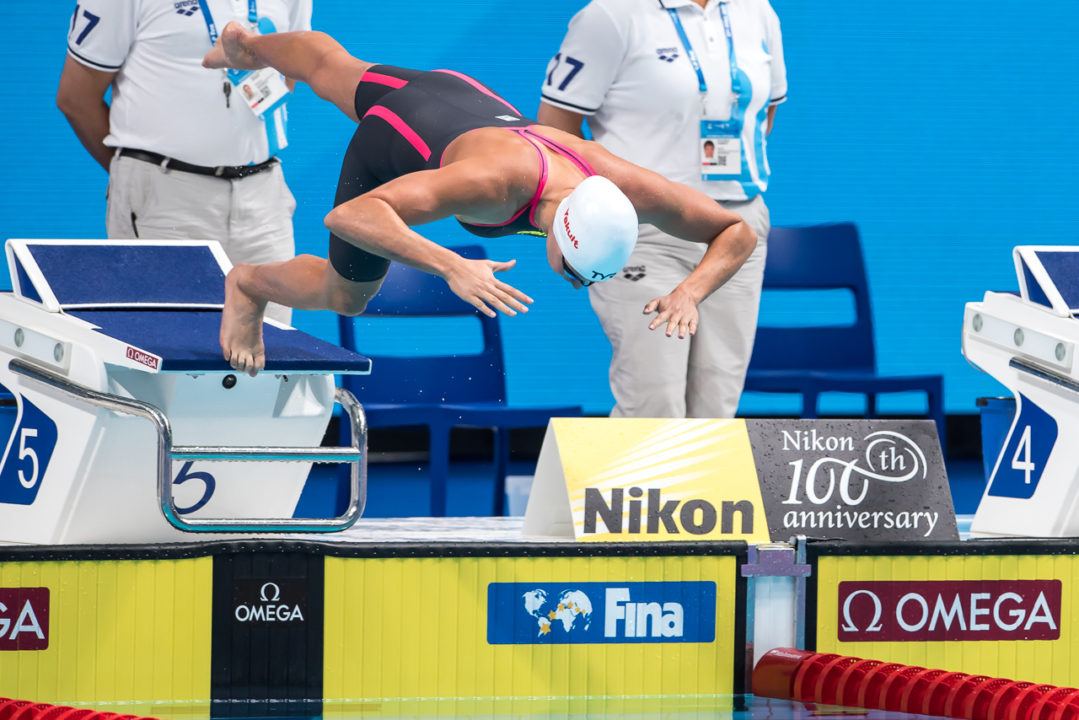 Charlotte Bonnet is keeping her stellar season streak going with a 50m-100m-200m trifecta in Chartres.

The 2018 French Open in Chartres concluded today, with the nation’s stars battling against visiting contingencies from Brazil, Japan, Ukraine and other nations.

Newly-minted world record holder Andrii Govorov got the job done right away in Chartres, taking the men’s 50m fly in the only sub-23 second mark of the field. Touching in 22.73, Govorov was off his time of 22.27 world record established at Sette Colli, but it was enough to hold off Brazilian Pedro Vieira and Kazakstan’s Adilbek Mussin. The pair touched in 2nd and 3rd with respective times of 23.88 and 23.94.

French athlete Charlotte Bonnet completed a freestyle sweep, taking 2 victories on night 1, including the 200m free and 50m free events. In the 200m free, Bonnet stopped the clock in 1:56.59, almost 2 seconds ahead of the runner-up swimmer Manuella Lyrio of Brazil. Lyrio’s time was 1:58.47, so Bonnet was the only swimmer  under 1:58.

Bonnet has been as fast as 1:55.53 this season, a time which remains as the 5th fastest in the world.

The splash n’ dash saw Bonnet clock the only sub-25 second outing, touching in 24.66 for the win. That checks-in as the 23-year-old’s fastest outing ever, dropping .12 off her previous career-fastest of 24.78 from May’s French Nationals.

On night 2, Bonnet charged to the wall first in the 100m free, stopping the clock in 53.34. That beat the field by well over a second. Bonnet currently sits #4 in the world with her personal and season best of 52.74 from earlier this season.

Japan’s Reona Aoki, Kosuke Hagino and Yui Ohashi all raced multiple events in Chartres as more Asian Games and Pan Pacific Championship tune-ups. Hagino won the men’s 400m IM on night one, finishing in a solid time of 4:13.50. Hagino currently sits as the #3 swimmer in the world with his season-fastest 4:10.69 form this past April.

Swiss national record holder Jeremy Desplanches got the better of Hagino in the 200m IM, however. Desplanches crushed a winning effort of 1:57.77, a mark just .71 behind his season-best of 1:57.06. Hagino clocked a uncharacteristic time of 2:00.54, a mark well outside his usual 1:57-1:58 range that has been automatic the past couple of years.

Aoki proved too fast for the women’s 100m breaststroke field as she beat every lane by over 2 seconds. Aoki scored a winning time of 1:06.61, off her season-best of 1:05.90 that sits as the 3rd fastest mark worldwide. Aoki was in action in the 50m breaststroke as well, but fell just shy of gold. Aoki finished in the splash n’ dash in 31.35, but the winner was Brazil’s Jhennifer Conceicao who earned the top prize in 30.84.

Aoki also took the women’s 200m breaststroke to add more hardware to her loot, finishing in a time of 2:25.01. She’s been as quick as 2:21.85 so far this season and is a threat for Pan Pacific and Asian Games medals.

French racer Marie Wattel threw down the 2nd fastest performance of her career in the women’s 100m fly, winning in a quick 58.13. That was enough to hold off Brazil’s Daynara De Paula, who finished in a time of 58.44 for silver. For Wattel, her career’s quickest was the 57.53 registered last year.

The pair also raced together in the 50m fly, but Melanie Henique was too tough to beat, registering a winning effort of 25.88, just off her season-best of 25.63. Wattel settled for silver in 26.27, while De Paula earned 3rd in 26.7

Frenchman Mehdy Metella was victorious in the men’s 100m fly, touching in 52.02 for gold. He was already 51.68 this year, so look for him to be a challenger at this summer’s European Championships.

Hungary’s Liliana Szilagyi took the women’s 200m fly in a time of 2:09.24, the only swimmer under 2:12. Szilagyi has already been as fast as 2:08.01 this year, a mark that is positioned as 9th fastest among the world’s best this season.

Brazilian beast Bruno Fratus scored yet another sub-22 second 50m freestyle, this time touching in 21.90 for gold. That was .21 ahead of runner-up Govorov, who nailed a silver medal mark of 22.11, his fastest this season. Japan’s Shinri Shioura rounded out the top 3 in a mark of 22.23.

Nice to see a 200 back from Ohashi. She has such an easy stroke and could be really good in that event. She’s a pretty sharp flyer, too. It went under the radar, but she was 57.xx in the 100 fly, only second to Ikee at Japan Open this year.

I’ve watched her races on TV and her technique overall is great. She looks so easy in the water. Like most of Japanese swimmers by the way. Not very powerful but great technique.