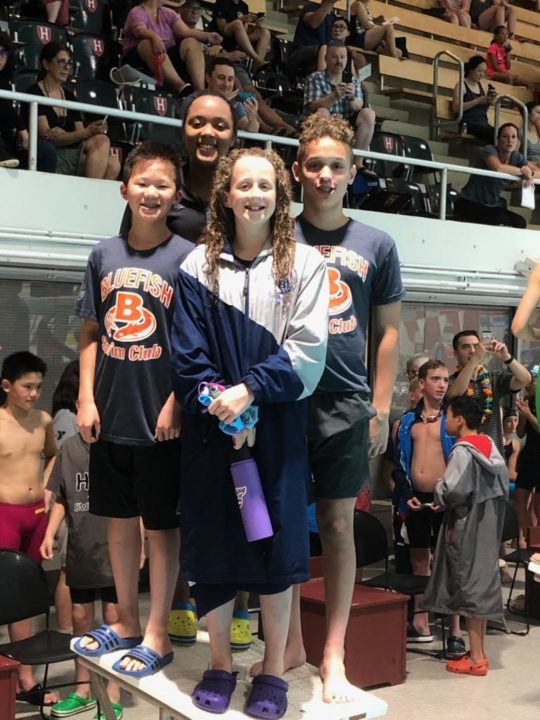 The Bluefish Swim Club set a new National Age Group Record in the mixed 11-12 400 medley relay, putting up a time of 4:37.24. Current photo via Bluefish

The Bluefish Swim Club set a new National Age Group Record by a whopping 12 seconds competing at the 12 & under New England Harvard Championships in Cambridge, recording a time of 4:37.24.

After USA Swimming announced they would start recognizing mixed relay NAGs in September of 2018, they set benchmark records for each event just last month.

This event is one of the ones that had seen the benchmark record go down already, as the Seattle Metropolitan Aquatic Club put up a time of 4:49.55 in late June to take out the benchmark time of 4:55.23.

Tonight, the team of Zuri Ferguson, Thomas Lenston, Theodore Sun, and Megan Kelly combined for that 4:37.24 to annihilate the record.

Ferguson is coached by Ryan Yucka, and Lenston, Sun and Kelly are all coached by Nick Rice.

Check out a split comparison of the two swims below:

Currently, there are eight of the 21 mixed relay events that have a legitimate record rather than a benchmark time. You can check out the full list of records here.