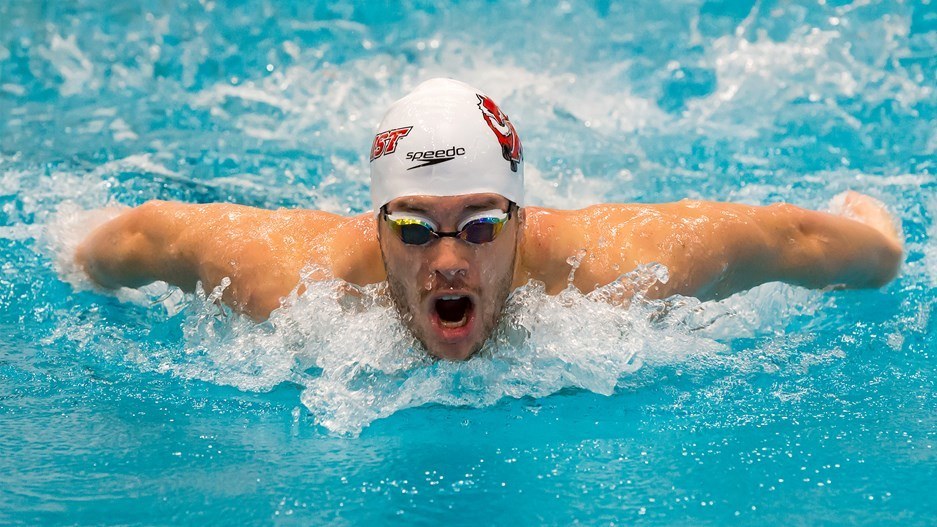 Marist men's swimming and diving opened up the second half of the season with a 199-101 win over Binghamton at McCann Natatorium, while Binghamton took the women's meet 151-149. Current photo via Marist Athletics

POUGHKEEPSIE, N.Y. – Marist men’s swimming and diving opened up the second half of the season with a 199-101 win over Binghamton at McCann Natatorium. They won all but two events on the day. The team moves to 7-2 on the season.

Distance races continued to be a strength for the Red Foxes as John Hurley placed first in the 1000-yard freestyle and Brendan Rice won the 500-yard freestyle. Michael O’Donovan came in second in both events.

Daniel Knoll picked up another two wins on the day, winning both the 50- and 100- freestyle. Murray Coueslant won the 200-yard freestyle, completing Marist’s sweep of freestyle victories.

Freshman Ryan Kaplan faced some friendly competition against his brother, a swimmer for the Bearcats. Kaplan came out on top, winning both the 100- and 200-yard backstroke.

Raislan Aiken picked up wins in both the 1- and 3-meter. David Gallino came in second in the 1-meter and third in the 3-meter.

In a tightly contested dual meet between Binghamton and Marist, the Red Fox women fell 151-149 Thursday evening at McCann Natatorium. Marist falls to 4-5 on the season.

Diving stole the show with Sophomore Esabelle Gervasio placing first in both the 1- and 3-meter. Her score of 289.5 on the 1-meter breaks the school record, a record she had previously broke this past October. Sophomore Grace Reeves placed second in both events while senior Grace Casolo picked up a third place finish on the 3-meter.

Freshman Jordyn Deubel had a good start to the second half of the season, posting wins in the 200-yard freestyle and 400-yard IM and a second place finish in the 500-yard freestyle.

Junior Juliet Nowak continued her strong performance in the backstroke, picking up wins in the 100- and 200-yard backstroke.

Marist will travel to Boston to take on Boston College on Saturday, January 12. Meet time is set for 1:00 P.M.

POUGHKEEPSIE, N.Y. — Junior Olivia Santos won two individual events and anchored a pair of first-place relay teams, highlighting Binghamton’s split against Marist in a swimming & diving dual meet on Thursday afternoon at McCann Natatorium. The Bearcat women improved to a perfect 5-0 — their best start since the 2002-03 season — with a 151-149 victory. The men’s squad, however, fell to 3-1 with a 199-101 setback. The Marist men are now 7-2 while its women’s team is 4-5.

Atendido joined Santos in both first-place relay teams as did freshman Belen Marriaga. Sophomore Erica Bachiller was the fourth swimmer in the 200 medley team while junior Kaitlyn Lange completed the 200 free relay.

Binghamton trailed Marist heading into the final 200 free relay but squeaked out the win by taking first and third place.

“It was a gritty win on the women’s side,” head coach Brad Smith said. “It was a tough meet for us but we got the wins that we needed. That last relay event was huge for us. We are really happy for Olivia in how well she swam today.”

In the men’s meet, Binghamton ran up against a Red Fox squad that has now gone 17-3 in its last 20 dual meets and was the runner up at last year’s MAAC championships. Freshman Ryan Board was the only individual winner, taking top honors in the 100 breast.

“Marist is a tough team and they really brought it today,” Smith said. “They had a lot of great swims in the men’s meet.

The Bearcat women head to New Hampshire next Saturday while the men are off until the program’s Senior Day on Jan. 26.