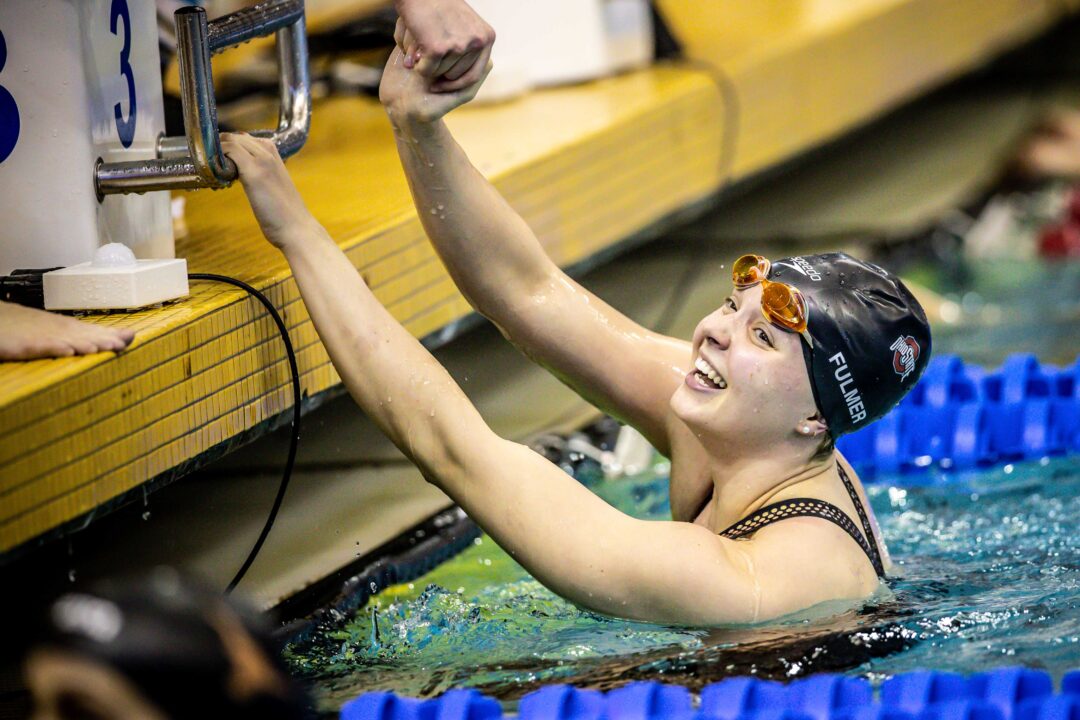 Ohio State's Amy Fulmer won two events on night two in Indy as the Big Ten women from Indiana, Ohio State, and Michigan combined to win all of the events. Archive photo via Jack Spitser/Spitser Photography

Many of the top midwest club and college swimmers are competing at the IU Natatorium this weekend.

Highlighting the prelims session was 2020 US Tokyo Olympian and bronze medalist in the event, Annie Lazor, who swam a 2:24.01 to be the top seed heading into finals. Lazor scratched the event for finals, but notably, her prelims swim this morning was faster than her prelims swim for International Team Trials a few weeks ago. There she swam a 2:24.48 in prelims. Lazor is set to compete for the US in the 50 and 100 breaststrokes at the 2022 World Championships less than a month from now in Budapest.

Ohio State’s Amy Fulmer continued her success from night one into night two winning the 50 free in a 25.75. Michigan’s Claire Newman was second in a 25.93. Kit Kat Zennick of Ohio State was third in a 26.22. All three were in the Big Ten A final of the short course version of the event this February.

Winning the men’s 50 freestyle was Andrej Barna in a 22.69. Barna represented Serbia at the Tokyo Olympics swimming a 22.29 for 28th place there. Indiana’s Jack Franzman was second in a 22.99 just ahead of teammate Rafael Miroslaw who was third in a 23.01.

Indiana’s Mackenzie Looze continued the Big Ten wins on the women’s side, winning the 200 breast in a 2:29.24. This was just off her 2:27.60 which she swam at International Team Trials to finish sixth. Teammate Brearna Crawford was second in a 2:29.83, and Ohio State’s Reese Dehen was third in a 2:37.66.

Amy Fulmer of Ohio State picked up her second win of the night with a 1:00.73 100 backstroke. That was just off of her 1:00.48 which she swam to finished eighth at International Team Trials. Indiana’s Anna Peplowski was second in a best time of 1:01.37, and Michigan’s Casey Chung was third in a 1:02.81.

Brearna Crawford was .10 off the NZ Open Record in the 200 Breast!