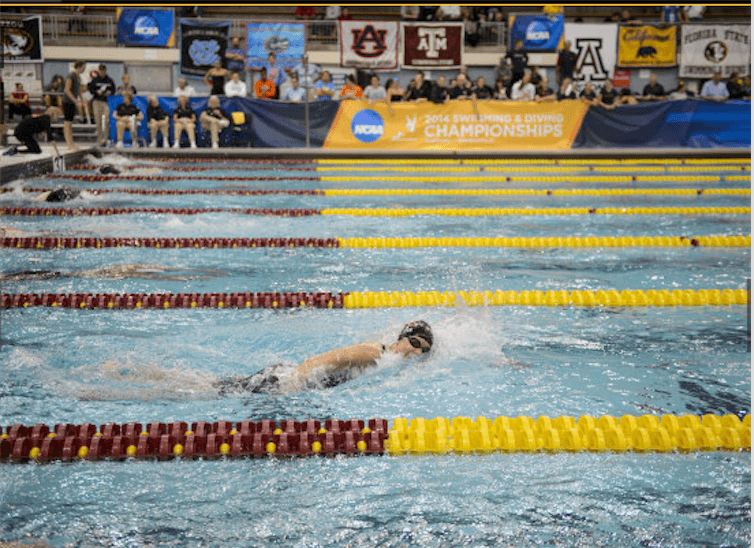 Rounding out our Senior Spotlights for the women of the Big 10 is none other than the three-time defending Big... Archive photo via University of Minnesota Swimming & Diving

Rounding out our Senior Spotlights for the women of the Big 10 is none other than the three-time defending Big Ten Champions, the University of Minnesota, and senior Kiera Janzen has been a remarkable ingredient in the Golden Gophers’ formula for success over the past four years.

Originally a swimmer who engaged in more sprint-oriented training, Janzen, a native of White Bear Lake, Minnesota, arrived on campus for the Golden Gophers as a very promising rising star. She captained the 2010 U.S. Youth Olympic Games squad that competed in the inaugural 2010 YOG in Singapore, competing individually in the 200 free (2:02.01, 4th) and in the 400 free (4:14.28. silver medal).

Building off her success from her freshman year, Janzen had a tremendous sophomore campaign with the Golden Gophers, with all of her best times coming at the conference championships once again. Highlighting her individual performances was a new school record in the 500 free (4:35.70, 2nd) which eclipsed the old record of 4:36.23 previously held by Ashley Steenvoorden from the 2012 NCAA Championships. Additionally, Janzen would take runner-up honors again in the 200 free (1:45.20) and in the 1650 free (16:04.05). As a member of the 800 free relay, Kiera swam a 1:44.24 anchor leg to help the team go a 7:01.27, good for 2nd place overall.

At that year’s NCAA Championships, Janzen improved significantly in her placings from her freshman year, taking 15th in the 500 free (4:41.51), and 11th in the 1650 free (16:04.35) before helping the Golden Gophers take 8th in the 800 free relay (7:02.77). She would receive first team All American accolades with her contribution to the 800 free relay while also garnering honorable mention awards in her individual events.

Janzen has also experienced great success in the club swimming realm as well. At the 2013 US Open Championships, Janzen came away with a win in the 200 free (1:58.28), and this performance gained her a spot on the 2013-14 U.S. National Team roster.

Outside of the pool, Janzen has also accumulated a number of academic awards along the way. She is a two-time Big Ten Distinguished Scholar (2013,2014), and is a multiple time All-Big Ten and CSCAA Scholar All-American honoree.

With just one day left until the 2015 Big Ten Championships kick off, you can bet that the Minnesota Golden Gophers are ready to kick off Championship Season with a bang. Kiera Janzen has known nothing but team victory at the conference championships, and even though her sights are very likely set on the NCAA Championships next month, she will be as instrumental as ever to the team’s effort both individually and on relays. Expect her to be race-ready in all of her events, and you will find her at the forefront of Minnesota’s mission to grab their fourth conference title in a row.

School Major/Degree: Journalism and Political Science
Favorite Event: 800 free relay, 200 free (especially LCM)
Favorite Hobby/Hidden Talent: I can play the ukulele.
Favorite Movie: Chariots of Fire
Role Model Growing Up/ Person You’d Like to Meet: My favorite athlete has always been legendary runner Steve Prefontaine, and I would have loved to have the opportunity to meet him and watch him compete. His work ethic, gutsy approach to races, and passion and determination to become the best are qualities that I particularly admire and strive to emulate.
Favorite Food/ Pre-Race Meal: I don’t have a specific pre-race meal that’s a favorite, but my favorite post-race meal is steak, potatoes, Caesar salad, and watermelon.

I first started swimming competitively when I was six. My Mom was a coach and my sister swam, so I pretty much grew up on the pool deck and joined the team as soon as I could.

My favorite collegiate swimming memory so far is winning the 2013 Big Ten Championship in our home pool. It was a really fun and great meet for the whole team from start to finish, and being able to compete in such a fast and fun environment with the support of all of our families, friends, and alumni was a really cool experience.

In High School, you competed more in the shorter distance freestyle events, even if you were always more of a middle-distance-oriented swimmer. However, as our readers can see from your times, you transformed into an excellent miler over your time at the University of Minnesota. Can you talk a little bit about what the transition into a collegiate environment was like, as you were expected to excel in some of the longer races?

I like to joke with/remind Kelly about how during the recruiting process we talked about me swimming either the 100 or the mile as my third event, but the mile is an event I’ve come to embrace and appreciate more throughout my career at Minnesota. When I came in as a freshman, Ashley Steenvoorden sort of took me under her wing and I was very lucky to have her as a training partner for three years, and I think that made a huge difference in my transition. Kelly and the rest of the coaching staff at Minnesota also do a great job of balancing my training so that I’m able to go from the 200 up to the mile.

You already have significant experience at the NCAA Championships from your three previous years with Minnesota. Do you feel like it becomes a little bit easier to approach the meet every time you go back, or does each year have its own unique dynamic when it comes to your races specifically?

Every year NCAAs is a bit of a different meet and I’ve learned new things each year, but I think those experiences make it a little less nerve racking going in. Even though it’s the fastest meet in the world from top to bottom, focusing on what I’m prepared to do individually and what our team is prepared to do makes it easier to approach the meet.

The Golden Gophers have won the Big Ten Championships back to back to back, and this of course coincides with your tenure with the team. What do you think is “in the water” up in Twin Cities that has allowed the team to reproduce their success year in and year out?

I’m very fortunate to be a part of such an awesome class, and I think when we came in as freshmen, we were able to take our energy in and out of the water to build on the foundations that all the great previous Gopher teams had laid and take it to the next level. We’ve grown as a class athletically and personally each year, and have also added great new classes every year, and I think all that has helped the team as a whole to keep improving.

Definitely my family. I come from an athletic and very competitive background, and grew up around sports due to my parents’ and siblings’ participation and passion for sports. More importantly, my family has always been extremely encouraging and supportive of my swimming career. They come to watch pretty much all of my meets and fully understand and support how much swimming means to me.

I’m going to continue swimming and pursuing my goals for 2016 and then after that I plan on going to law school.

Hard work works, and I’m very excited to see how we’ll perform at Big Tens and NCs. This is an incredible team in and out of the pool and I know we’re all really looking forward to championship season.