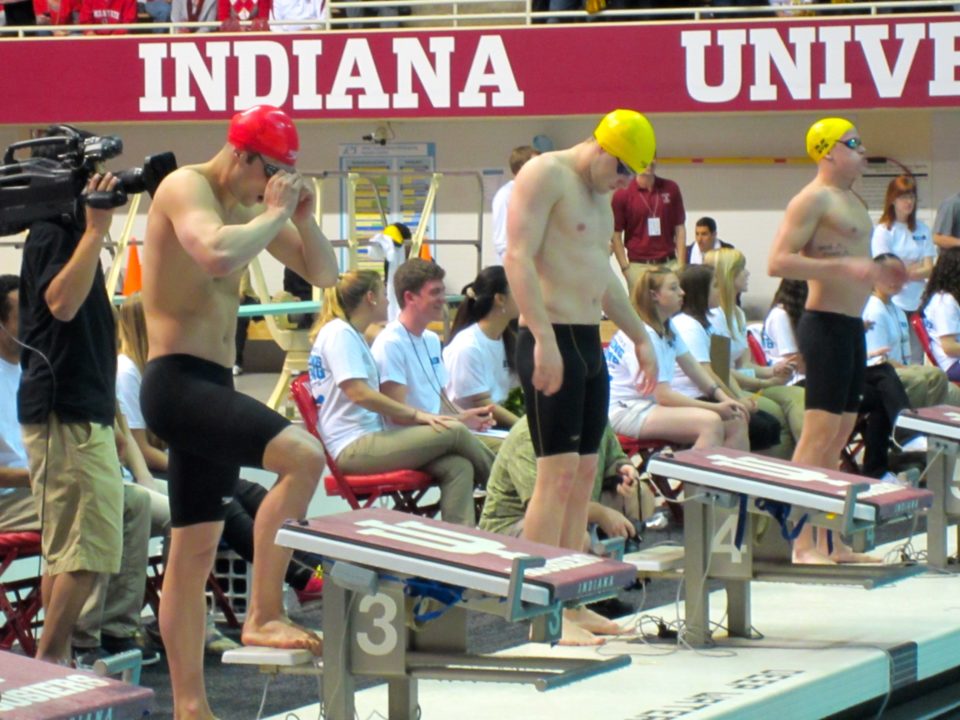 Natalie Schumann is covering the Big Ten Championships for us this week. She is a journalism major at Indiana.

Michigan held on tight to their seeds from the prelims, but tonight Connor Jaeger took the B1G title with a time of 4:13.44, ahead of third place teammate Anders Nielsen (4:14.15). Jaeger, who placed fifth at last year’s NCAA meet with a 4:15.67, dropped nearly three seconds from prelims to finals. Nielsen has also proven himself to be a valuable asset to the Wolverines after enrolling at Michigan and joining the team in January, just a month and a half ago.

Wisconsin’s Michael Weiss defended his second place slot, finishing just ahead of Nielsen with a 4:14.07. Weiss dropped over two seconds from prelims to finals, breaking up Michigan’s powerful quartet of finalists. He placed 15th at NCAA’s last year with a time of 4:18.67.

In a heat composed of only swimmers from the two top-scoring teams of the meet thus far, Indiana’s Cody Miller was victorious. As soon as the breaststroke leg began, Miller emerged as the leader of the pack. He finished with a time of 1:41.85, setting a new pool record, school record and B1G Meet Record (previously set by Tyler Clary in 2010). Miller’s time is the second-fastest time in B1G history behind Clary’s 1:41.67. He is also the defending B1G champion in the 100 and 200 breaststroke events.

Michigan snuck onto the top of the podium once again, as sophomore Bruno Ortiz claimed first with a 19.27, a tenth faster than last year’s top time. His teammates Zach Turk (19.49, fifth) and brother Miguel Ortiz (19.76, eighth) added another 25 points to Michigan’s score.

One disqualification in a conference meet relay final is devastating enough. Two in the same heat, eliminating the second and third place finishers, is an entirely different story. Indiana would have finished second but was disqualified for a double dolphin kick during the breaststroke leg. Penn State, the third place candidate, was disqualified for an early exchange. Instantly, Ohio State’s and Iowa’s relays moved up to claim the second and third spots along with the prized team points.

Michigan holds the top team spot after the second day of competition. Even with a relay disqualification, Indiana’s performances in the pool and on the springboard have preserved their second place ranking. Tomorrow brings interesting individual races, specifically the 100 Butterfly, as well as 3-meter springboard diving and the always-exciting 200 Freestyle relay.

What’s with the circus sweat pants for Indiana?

Don’t dis the classic standard IU pants please! Didn’t you see Cody Zeller wearing his pair on the cover of Sports Illustrated recently?? Gheesh. Best in the world, I say.