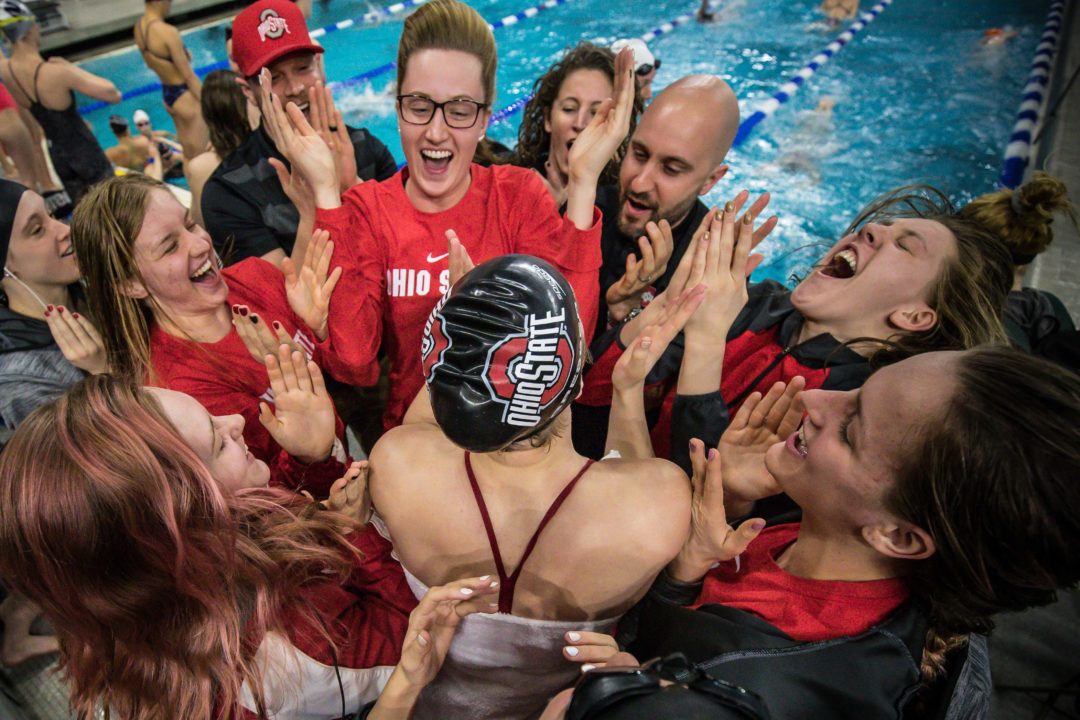 The defending Big Ten Champions from Ohio State, along with the rest of the conference, will have to wait until at least January 1 to start their seasons. Archive photo via Jack Spitser/Spitser Photography

In spite of some movement in the Big Ten Conference’s original decision to not play football this fall, the conference will continue to take a more cautious approach to other sports. That includes swimming & diving, along with several other winter season sports, where the conference informed coaches this week via email that no competition would take place prior to January 1st.

This is part of the conference’s ongoing pandemic response to the coronavirus pandemic.

“The Administrators Council has determined that with the exception of football, men’s and women’s basketball and perhaps men’s ice hockey (and women’s ice hockey for those schools that sponsor it), there shall be no competition prior to January 1st,” the email reads.

While many NCAA Division I teams have returned to training, not all of the Big Ten has yet been able to resume formal in-water practices.

The Big Ten follows the SEC, which last week announced that teams can begin their official season as of October 1, 2021. Other Division I conferences have not yet made announcements about their plans, though the Georgia Tech Yellow Jackets of the ACC last weekend held their first meet of the season: an intrasquad.

The Pac-12’s latest update is still to postpone all sports competitions, including swimming, until at least January of 2021. That conference is home to both of the defending NCAA Division I Championship teams in swimming & diving: the Stanford women and the Cal men.

The Pac-12 is the only of the Power 5 conferences that has still not decided to play football this fall.

Big Ten schools also sponsor programs in the NCAA winter sports of fencing, pistol, rifle, and bowling. Those sports are likely to be impacted as well, even though the teams do not compete in the Big Ten Conference.

While some pieces of the plan for NCAA swimming & diving are becoming a little clearer, there is still no solid information on championships, be it conference or national, except that the Missouri Valley Conference has voted to move its championship until April. That’s after the end of the traditional NCAA Championship meets, which are usually held in late March.

Ah, so the big money sports are okay, but not the rest

But tackle football is all good for October. 🙄