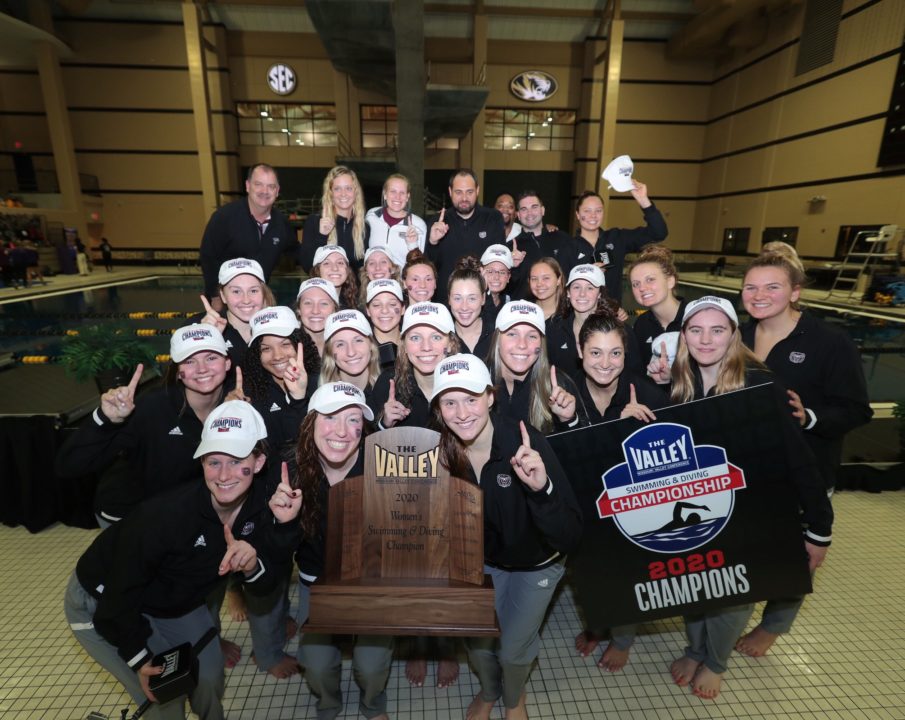 The Missouri Valley Conference has approved a move of their 2020-2021 women’s swimming & diving conference championship meet to mid-April, multiple of the conference’s coaches have told SwimSwam. The exact dates have not yet been finalized, though at a coaches’ meeting, the dates of April 21-24 were discussed.

The conference still intends to hold the meet at member school Southern Illinois University, which was announced earlier this year after hosting at non-member University of Missouri in the last 2 seasons.

The Missouri Valley announced earlier this year that they were postponing all MVC-sponsored fall sports until the spring season, with the hopes of participating in NCAA Championships in the spring of 2021. At that time, winter sports seasons, including women’s swimming & diving, were not impacted.

The NCAA has since postponed all of its fall championships until the spring as well.

The NCAA women’s swimming and diving championships are still scheduled to take place in Greensboro (women) and Iowa City (men) in March, so this April timeline could present scheduling challenges, or outright eliminate Missouri Valley teams from participating in the 2020 NCAA Championships.

The conference members’ men’s swimming & diving programs all compete in other conferences: Evansville, Missouri State, and Northern Illinois compete in the MAC, while Valparaiso competes in the Summit League.

This schedule presents all kinds of problems vis-a-vis NCAAs and Olympic Trials . . .

At the mid major level, where 99% of kids don’t make NCAA, this is a workable solution to have a nearly full season. I think you will see more than a handful of leagues go to this.

I actually like this idea. Some programs are barely in the water now due to lane restrictions. This would give more time to train and compete at a more comparable level for mid-major teams who do not have many NCAA qualifiers.

this would be a really good move especially for more mid major teams with very little no to NCAA qualifiers giving them a chance to get a better season in!